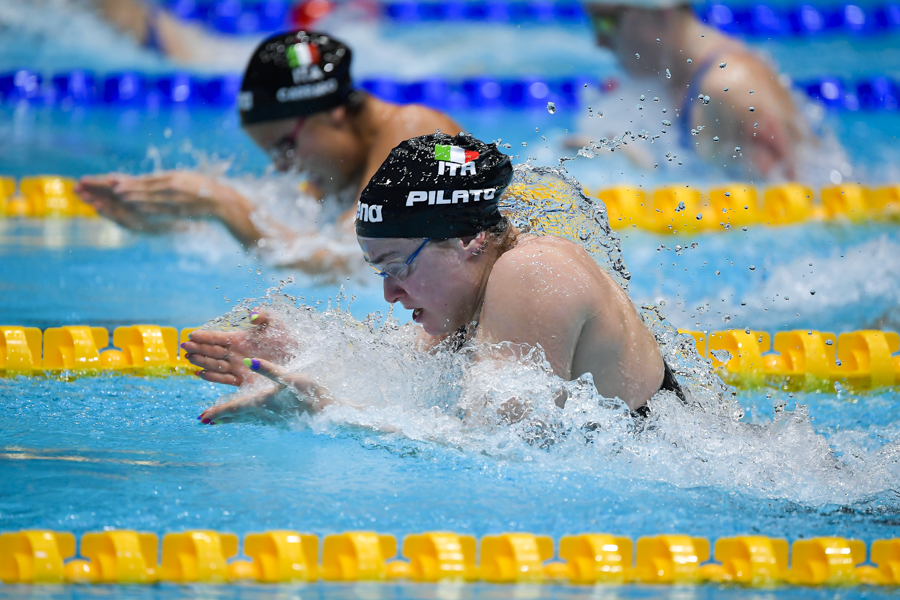 In a rematch of the 2019 World Championships, Lilly King and Benedetta Pilato will face-off for gold in the women's 50 breaststroke. Archive photo via Andrea Staccioli / Deepbluemedia / Insidefoto

The big story of this race is the battle brewing between American Lilly King and Italian Benedetta Pilato, who look to have placed themselves well ahead of the field. This will be the first time they’ve raced each other in the 50 breaststroke since the 2019 World Championships, where King claimed the gold medal ahead of Pilato by only a fingertip. Since then, the pair have both faced a few obstacles and setbacks on the international stage, only adding to the anticipation building for the race between them.

After the coronavirus delay of the Olympic Games in 2020, King came out firing in 2021, looking like she may once-again claim Olympic gold. However, an upset in the 100 breaststroke by teammate Lydia Jacoby left King with a bronze medal in that event, and though she did earn her first major international medal in the 200 breaststroke with a silver, it became apparent that King was not satisfied with her performance. Out of her “off-year”, King currently holds the top time in the world in the 200 breaststroke and ranks second in 100 breaststroke.  In addition, she holds the third fastest 50 breaststroke time this season, and that likely without a full taper under her belt. With the spark from Tokyo, expect King to throw down some big performances at Worlds, especially as she looks to become the first person to win the 50/100/200 breaststroke at the same World Championships.

At the 2019 World Championships, Benedetta Pilato broke out on to the season when the then 14-year-old took on King head-to-head, nearly dethroning her in the 50 breaststroke. Ultimately, Pilato came up just .2 short of King, posting a time of 30.00 to claim the silver medal. During the competition, she also set the Italian Record in the 50 breaststroke with a time of 29.98, nearly taking down the World Junior Record in the process.

With momentum behind her, Pilato looked to be one of the top contenders to challenge King for Olympic gold entering 2020. Prior to the coronavirus lockdown, she claimed the World Junior Record in the 50 breaststroke with a 29.85 and set a new personal best in the 100 breaststroke (1:06.02). However, Pilato was forced to wait another year with the lockdown, making 2021 her first opportunity in nearly 2 year to battle with King.

Leading up to the Olympics in 2021, Pilato looked to have regained her momentum, shattering King’s world record in the 50 breaststroke with a time of 29.30 and dropping her best time in the 100 breaststroke down to 1:05.84. However, in Tokyo, Pilato was disqualified for “scissor kicking” during prelims of the 100 breaststroke, keeping her from competing for Olympic gold.

Though her Olympic outing did not go as expected, Pilato appears to be back on track this year. She currently holds the fastest 50 breaststroke time in the world this season (29.58), which is her second fastest performance ever behind her world record breaking swim. Assuming she can hit the same time in Budapest, Pilato is in a strong position to hold off King, especially considering she set her world record at the pool in Budapest.

The Rest of the Pack

It appears that the battle will come down to King and Pilato. However, there are several other swimmers in the pack that have the potential to find themselves on the podium, especially if either swimmer is off of their game.

Both the USA and Italy bring strong second entries into this race, giving both nations the potential to see two medalists on the podium.

Italian Arianna Castiglioni currently holds the third fastest time in the world this season with the 29.86 that she swam in late May. Her time marked a new personal best for her, dropping .2 off of her previous time. Castiglioni was the 2021 European Champion in this event and has a multitude of medals from that competition, but she has yet to earn a medal at the long course World Championships or the Olympics. Given her recent swims though, 2022 could very easily be Castiglioni’s year to finally reach the podium.

American Annie Lazor is in a much much different situation than Castiglioni as she has never raced this event at an international competition. In fact, Lazor, a 200 breaststroke specialist,  did not even qualify for this event initially, but was later added to the US roster based off of her 31.04 split on the opening 50 of her 100 breaststroke at Trials. Her time dipped under the FINA A cut of 31.22, allowing for the entry. Given that Lazor’s time was posted in such a situation, it is likely that we’ll see a drop from her when she contests the event without the addition of another 50 afterwards. Lazor’s best time stands at 30.96 from back in 2019, which in itself would be good enough to qualify for the final.

20-year-old Anna Elendt and 18-year-old Lara Van Niekerk have both had breakout seasons in 2022, placing themselves right into the battle for the podium.

Van Niekerk is one of South Africa’s rising breaststroke stars following the world record breaking performance Tatjana Schoenmaker threw down last summer. At the African Championships, Van Niekerk stunned Schoenmaker to claim both the 50 and 100 breaststroke titles, setting a new South African record in the 50 (29.72). Entering these World Championships, Van Niekerk is carrying a ton of momentum, especially after proving she can throw down big performances when it counts.

The German contingent also has a swimmer highly ranked this season as Anna Elendt ranks 6th in the world this season, with her time of 30.10  Elendt, like Van Niekerk has been on the rise this season after an explosive NCAA season at Texas. She recently shattered the German records in the 50 and 100 breaststroke with times of 30.10 and 1:05.58. Both swimmers could be in contention to final with their times. However, to get both swimmers on the podium will be a tall task with King and Pilato both in their ways.

Reona Aoki of Japan recently broke the Asian Record in this event, posting a 30.27 at the country’s selection meet, putting herself in a great position entering Worlds. She has been extremely consistent in the 100 breaststroke this season as well, showing that she has the ability to remain consistent through three rounds of racing. Another name to watch for is Sweden’s Sophie Hansson, who, like Elendt is coming off of a successful NCAA season. It does not appear that Hansson has raced this event yet this season, but she is entered with a time of 30.31, putting her right in the mix. Israel’s Anastasia Gorbenko has a loaded event schedule for this meet, meaning she could opt to drop the 50 breaststroke. However, she ranks 15th in the world this season with a time of 30.45, and should not be overlooked as a potential finalist.

Not to be forgotten, Lithuanian swimmer and former world record holder Ruta Meilutyte also enters the event as a threat after posting a 30.24 at the Lithuanian Championships. She has been as fast as 29.48 way back in 2013, but has not been near that time since then. The Olympic Champion is an interesting addition to this race, especially considering she came out of retirement in 2021 and has only been back in the pool for about a year.

I don’t see the rational for King being first

Benny P for the V

I see Pilato winning. She has such raw speed, and to be honest, I see her also winning the 100.

Okay so, Van Niekerk has a better PB and SB than King a Castaglioni but she’s 4th,WR holder Pilato is 2nd, Clark is put in 5th even though she’s not even swimming at this meet, Barwinski is in 6th even though he’s a man and Lazor the 200 specialist is ahead of Elendt who has a PB and SB 1 second faster than her. This is a SwimSwam special

King has a better PB tbf

I think Pilato wins if she ignores King and her typical acting in the ready room. She has put faster times in the 50 that King has not reached since 2017

Indeed missing Gorbenko is within reason, yet she is so competitive and as this event is on the penultimate day she may surprise and at least get to the final. If she does, I’m quite certain she will drop the 400IM and focus on making a splash on the final day of competition.

You have Lazor making the final and yet didn’t even mention Gorbenko and Hansson who both stood on the podium at SC worlds? Gotta love the US favouritism.