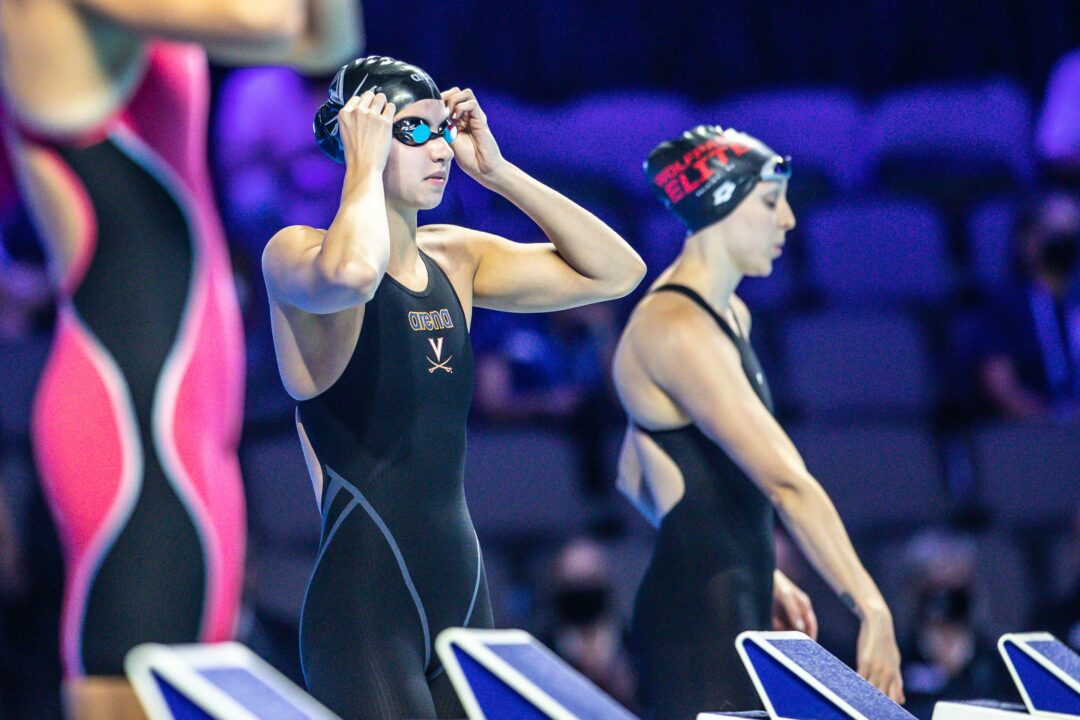 Kate Douglass is the top-seeded woman in the 50 free, but the race will be primed for a showdown between her, Gretchen Walsh, and Maggie MacNeil. Archive photo via Jack Spitser/Spitser Photography

In 2019, Abbey Weitzeil became the first woman under 21 seconds in the 50 free with her NCAA, American, and US Open record-breaking 20.9-second swim. For the last three years, Weitzeil has remained the only woman to ever be beneath that barrier, but that all looked like it was about to change two weeks ago at the ACC Championships.

At that meet, Virginia’s Kate Douglass won the 50 free in a massive 21.00, which made her the second-fastest woman ever, just behind Weitzeil. With NCAAs looming around the corner, Douglass has one more chance this season to join Weitzeil in the sub-21 club and to take down her record in the process.

Douglass was ranked tenth in the event her freshman year, and then made a huge jump her sophomore year in 2021 to become NCAA Champion, after narrowly edging out Michigan’s Maggie MacNeil by just 0.04 seconds for the title. She came out of high school with a best time of 21.67, and has dropped nearly 0.7 seconds since entering Virginia.

While Douglass is our favorite to win and potentially make history in the 50 free, she will have many competitors who will make it a close race, particularly her Cavalier teammate Gretchen Walsh and her 2021 NCAA rival Maggie MacNeil.

Although Walsh finished second to Douglass at ACCs, her time of 21.04 as a freshman is just as impressive. Walsh’s swim was fast enough to win NCAAs last year by nearly a tenth of a second, is the #5 fastest swim of all time, and made her the fastest freshman ever in the event as well–significantly faster than Douglass was as a freshman. In addition, Walsh anchored Virgnia’s NCAA record-breaking 200 free relay in a blistering 20.58 split, which is the eighth-fastest relay leg of all time. Walsh’s recent performances indicate that she is in good shape to challenge her teammate for the crown, and perhaps even take on Weitzeil’s record too.

MacNeil defeated Douglass in two out of their three contested events last year, the 100 free and the 100 fly, but came up just short in the 50 free. Although she is seeded a few tenths behind Walsh and Douglass with a 21.32 entry time from Big Tens, MacNeil herself that she was not tapered for that meet, which means she potentially has a lot more in store for her NCAAs race.

In fact, a big drop from Big Tens to NCAAs is something very common for MacNeil, which gives us no reason to doubt that she can be in the mix for the title along with the Virginia sprint duo and avenge her loss from last year.

It’s important to note that the last time MacNeil swam at a major competition, it was the 2021 Short Course World Championships where she unexpectedly broke the world record in the 50 back, meaning that she could very well do something big at NCAAs too.

Aside from the top three seeds, the rest of the 50 free field is incredibly fast as well. The eighth-seed time is a 21.71, over two-tenths faster than the 8th-place finish time of 21.96 from the A final last year. The cutline from last year to this year is faster by around the same margin, going from 22.32 to 22.17.

Looking to score major points in this event is the ACC trio of UNC’s Grace Countie and NC State’s Katharine Berkoff and Kylee Alons that went 3-4-5 at conferences.

Countie is seeded fourth after swimming a personal best time of 21.35, and looks to improve upon her fifth-place finish from NCAAs last year. Berkoff, who is primarily a backstroker, has made strides in her freestyle to take the seventh seed with a time of 21.63 from ACCs. After cracking 22 seconds for the first time in her career last year, she has dropped nearly two-tenths from her 2021 NCAAs times this season. In addition, she has also improved her 100 free by over a second this year, which indicates that she has plenty left in the tank for the sprints. Alons, the fourth-place finisher from last year, is the ninth seed at a 21.71. Although she has yet to hit her personal best of 21.54 from 2021, she split 21.11 on NC State’s 200 free relay at conferences, which is a promising sign that she can return to the A final this year.

Missouri’s Sarah Thompson, the third-place finisher from last year, had a disappointing finish at SECs when she took fifth in a 21.94 that is well off her best time of 21.42. However, it is important to note that last year, she didn’t even make the A final at SECs (despite swimming the fastest overall time in finals) before making the jump onto the podium at NCAAs. Although she is only the 13th seed this year, a repeat of what happened in 2021 can put her back into finals again.

Meanwhile, this year’s SEC Champion, Alabama’s Morgan Scott, has made some major improvements in a year in the 50 free. She placed 18th in the event at NCAAs last year with a time of 22.18, and then proceeded to break 22 for the first time when she went a 21.81 mid-season. Then, she improved upon that time even more when she swam a 21.51 at SECs to take the fifth seed entering this meet. Scott headlines a strong Alabama sprint squad that swept the 50/100 free and the 200/400 free relay titles at conferences, and is looking to make some noise at NCAAs.

It is important to note that Stanford’s Torri Huske, who has the #4 time in the nation this year, opted to swim the 200 IM instead of the 50 free. Her time of 21.43 from midseason shows that she go faster and potentially vye for the podium had she swam the event at NCAAs.

Dark Horse: Anicka Delgado, USC, Sophomore- Anicka Delgado skipped NCAAs last year in an attempt to qualify for the Olympics. She returns for the championship this year as an Olympian and a newly crowned Pac-12 co-champion. She is seeded 18th with a time 21.89, but considering how well USC has been firing on all cylinders under head coach Lea Maurer, there’s no reason not to believe she can sneak herself into the finals.

Bold prediction: within 10 years we will see a woman trying to break the 20 second barrier.

Maggie is not losing this

Agree. I’m a rooting for the UVA duo but just don’t see how Maggie would get third.

Wrong. Big Mac will get 60 points and together with summer “little Mac” McIntosh, they will bring a number of Golds in Paris👏👏👏.

it’s gonna be Douglass for sure.

When I hear 20-Point barrier, I think of someone trying to break 20, not 21. Not really important, but just how I thought of the wording.

I’m going to go with Walsh here with Douglass and Maggie right behind. Not really any bold predictions, but it’s hard to see anyone beating those 3. Wide open for the next few spots though