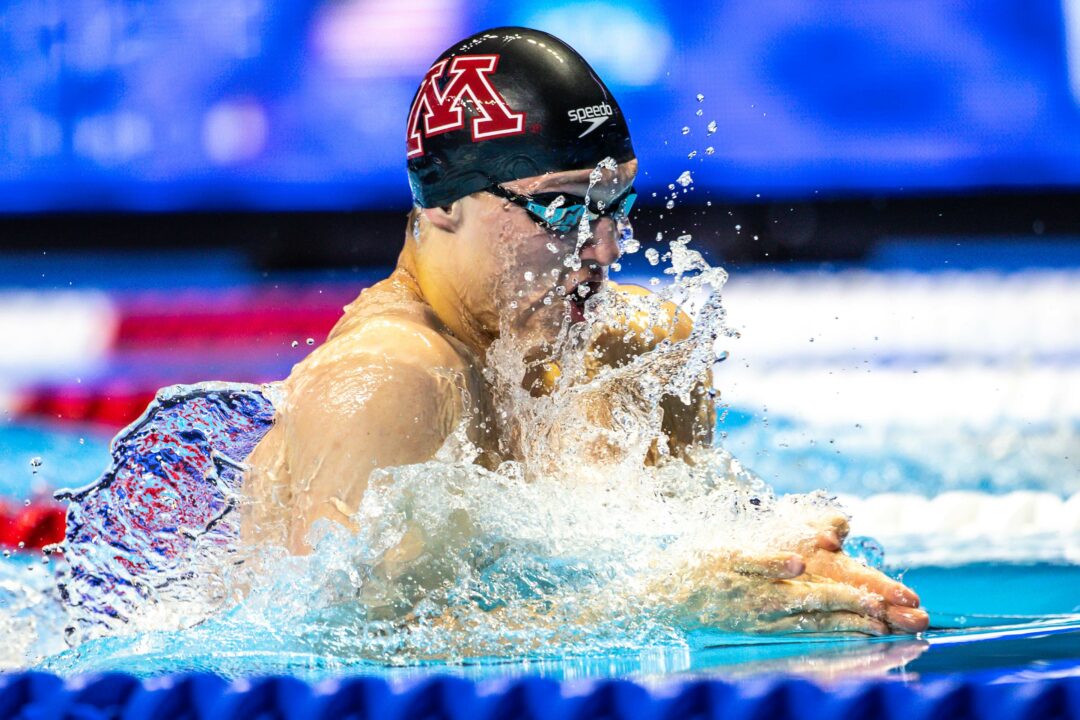 McHugh's sights are assuredly set on breaking the 50-second barrier, which would make him just the 2nd swimmer in history to do so. Stock photo via Jack Spitser/Spitser Photography

Minnesota’s Max McHugh picked up his first individual NCAA title when he won the 100 breast at last year’s NCAAs. He went on to win the 200 breast as well. McHugh won by a large margin last year, touching 0.78 seconds ahead of the runner-up.

Max McHugh: A Field of His Own?

His season best of 50.58 came in a tri-meet with Purdue and Northwestern in late January. He was a tick off that at the Big Ten Championships in February, swimming a 50.67 to win the title. Those two swims mark the fastest and second fastest swims in the NCAA this season.

McHugh’s personal best of 50.18 was swum at last year’s NCAAs. Given that, McHugh’s sights are assuredly set on breaking the 50-second barrier, which would make him just the 2nd swimmer in history to do so. Ian Finnerty’s NCAA Record of 49.69 could also be in play, as McHugh is just 0.49 seconds off the mark. Considering McHugh went 50.5 in January, then 50.6 in February, it appears that he may have more in the tank for NCAAs.

Of the A finalists at last year’s Championships, only two, Keefer Barnum and Zane Backes, aren’t returning this year. Of course, defending champ McHugh is in the field this year. Florida’s Dillon Hillis, runner-up last year, returns as the #9 seed. Hillis swam a 50.96 last year, but has only been 51.32 this year. That being said, Hillis dropped time from SECs to NCAAs last season, so there’s promise there.

Texas’ Caspar Corbeau, 6th last year, has swum exceptionally well this season, improving by nearly a full second in the event. His season best, which is also his personal best, came at the Minnesota Invite in early December, where he swam a 50.79. He swam 50.96 at Big 12s last month, his 2nd-fastest performance ever. Corbeau is a model of consistency. In fact, at last year’s NCAAs, he entered the meet with a 51.62, swam a 51.62 in prelims, then swam a 51.62 in finals.

Never to be counted out, Cal star Reece Whitley is in the field as well. Whitley has been 51.22 so far this season, just a bit off his personal best of 50.85. Whitley, just like Cal as a whole, wasn’t looking as sharp as usual at Pac-12s, so his best swimming of the season may come in Atlanta this week.

Louisville’s Evgenii Somov has nearly matched his personal best already this season, entering the meet with a 51.13. He swam a 51.03 at the 2021 ACC Championships, which currently stands as his career best. A positive in Somov’s column is that he was on fire for Louisville in the 200 medley relay at ACCs last month, splitting a sizzling 22.85. If he’s able to dip under 51 seconds in Atlanta, he could easily match his 4th-place finish from last year, if not better it.

Pitt’s Cooper Van Der Laan, 8th last year, has swum a career best this season, posting a 51.42 at the Ohio State Invite in November. That time has him seeded 11th for this meet, and if he’s able to match it in prelims, it just might be enough to earn him a spot in the A final again.

Leading the way in this section is Alabama’s Derek Maas, who was on fire at SECs last month. Firstly, Maas swam a stunning 22.63 on the 200 medley relay, which makes him scary in the individual 100 breast regardless of how meaningful you may think relay splits are. Maas’ 50.78 season best has him seeded 2nd, just 0.01 ahead of Corbeau. Margo Geer has done an exceptional job in her first year as Alabama’s head coach, leading the women’s team to a program record 4th-place finish last week. That being said, Maas could have something really special in store for us just a few days from now.

Michigan’s Will Chan wasn’t spectacular at Big Tens last month, swimming a 52.01, which is also his season best. That being said, he went his lifetime best of 50.95 last season, making him one of just six guys in this field to have gone 50-point before. Although Chan’s individual 100 breast hasn’t been up to his standards yet this year, he was still very good on the relays at Big Tens. He was 51.14 on the 400 medley, and swam a very speedy 22.76 on the 200 medley.

Another Big Ten breaststroker, Kevin Houseman (Northwestern) is someone to keep an eye on. Houseman finished 9th in prelims at NCAAs last year, one spot out of finals, but didn’t race in finals. He’s already swum a career best of 51.23 this season, which makes him the #7 seed.

Michael Houlie (Tennessee) was the B final winner at last year’s NCAAs, swimming a 51.26. He’s been a bit off so far this season, coming into the meet with a season best of 52.03, which has him ranked 26th. That being said, if Houlie swims a season best in prelims, he’s almost guaranteed a spot in finals, the question is just whether it will be the A or B final.

Trent Pellini, a 5th year at USC, enters as the #8 seed with a 51.28, which he swam at the Art Adamson Invite in November. The swim also stands as Pellini’s personal best. Pellini was a B finalist in the 100 breast at both the 2019 and 2021 NCAAs. As the 8th seed, a repeat of his season best performance should get him into the A final.

Dark Horse: Caio Pumputis, Georgia Tech – Pumputis is seeded 17th at this meet with his season best of 51.77. His personal best of 51.38 was swum at the 2019 NCAAs, earning him a 6th place finish. At that meet, Pumputis was an A finalist in all 3 events, so he’s the real deal when he’s on.

Consistency with this event has been exceptionally high for this guy for all 4 years. I think we will see an upset. Voting for Maas based on this season’s trajectory. Good luck to all!

After his 59.5 last summer I think this is Mchugh’s time to go under 50. His starts and turns are there.

Darkhorse is probably Josh Matheny. He’s seeded at 15th but he could very easily make an A final, especially with his big stage experience and the way Michigan swam last week. I think he bumps Chan out

Hoping that Noah Nichols of UVA has something more in the tank and comes close to his PB of 51.09!

Also, keep an eye out for Jarel Dillard, of Tennessee. He has great first half speed, and was out in a blazing fast 23.8 for the first 50 of the hundred, touching at 51.2 at SECs this year.

But he swims for Tennessee and based on their ranking of Crooks, swimswam is not very confident in Tennesse’s ability to double taper

Whitley could miss the A final, needs to be careful!

He’ll get it. My God he’s big enough to get it.

Max McHuge looks like young Peaty, with better underwaters.
So, looks and necessary skills are already there.
Now to planning phase: “Project 49”.