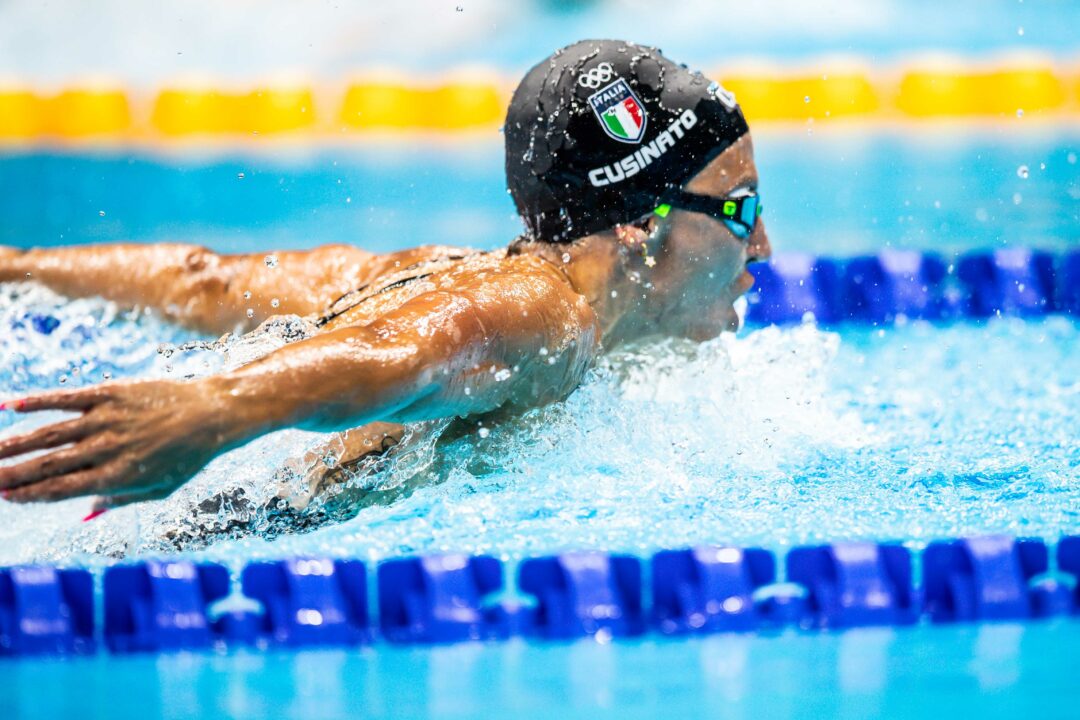 Italy's Ilaria Cusinato, the #6 seed in the women's 200 IM, has pulled out of the event for day 5 prelims. Stock photo via Jack Spitser/Spitser Photography

There were 4 scratches in the men’s 1500 free prelims, which is notable since there were only 17 swimmers entered in the event in the first place. At the top of the list, Germany’s Lukas Martens, the #4 seed, has pulled out of the race. Martens won Silver in the 800 free final just a few days ago. Hungary’s David Betlehem, the #11 seed has also pulled out, as well as Ireland’s Liam Custer and San Marino’s Loris Bianchi, the #16 and #17 seeds.

There are a pair of scratches in the top 20 seeds in the women’s 200 IM, both from Italy. Ilaria Cusinato, the #2 seed, and Costanza Cocconcelli, the #12 seed, have both scratched out of the event.

There are no scratches to report in the top 20 seeds of the men’s 50 breast or the women’s 100 back.

The women’s 50 free should be a fun event, seeing Sweden’s Sarah Sjostrom go up against Poland’s Katarzyna Wasick. At least as far as entry times are concerned, the race should come down to Sjostrom and Wasick, with Sjostrom having the slight edge. Sjostrom is the World Record holder in the event and is fresh off winning the World Championships in June with a 23.98. Wasick swam her lifetime best of 24.11 in semifinals of World Champs, then won Silver in finals with a 24.18.

100 breast champion Nicolo Martinenghi of Italy comes into the men’s 50 breast today as the heavy favorite. With no Adam Peaty or Arno Kamminga in the field, Martinenghi’s path to Gold in this event is as clear as it ever could be.

Netherlands’ Kira Toussaint leads the entrants in the women’s 100 back, but after a fairly down performance in the 50 back earlier in the meet, her status as the top 100 backstroker in the field may be in jeopardy. Toussaint is the only swimmer in the field seeded under 59 seconds, but Italy’s Margherita Panziera, the 200 back champion, is seeded at 59.01. Panziera provides a very real threat, as does France’s Analia Pigree, who won the 50 back last night in a new French Record of 27.27.

There’s not too much to be said about the men’s 200 fly, where Hungary’s Kristof Milak is as close to a Gold medal guarantee as we have in the sport. Milak has had a very busy schedule in Rome, however, he’s the fastest 200 flyer in this field by nearly 4 seconds, and has been swimming quite well for the most part this week.

After missing finals in the 400 IM in a disappointing performance, Hungary’s Katinka Hosszu will look to rebound in the women’s 200 IM. The World Record holder in this event as well, Hosszu enters the meet as one of two swimmers seeded under 2:10, with the other being Israel’s Anastasia Gorbenko (2:09.99). Hosszu shouldn’t have an issue advancing this time around, as she didn’t make it through in the 400 IM because she was the 3rd-fastest Hungarian in prelims, but there’s only one other Hungarian entered in the 200 IM.

Only 13 swimmers are entered in the men’s 1500 free today, meaning just 5 swimmers will miss out on qualifying for finals. We know one of those swimmers will be Italian, since there are 3 Italians competing in the event and only 2 swimmers per country are allowed to advance. After a Championship Record performance in the 800 free earlier in the meet, Gregorio Paltrinieri comes in as the favorite. Paltrinieri’s 800 came on the back of his stunning performance at the World Championships earlier this summer, where it seemed he could possibly break the World Record.