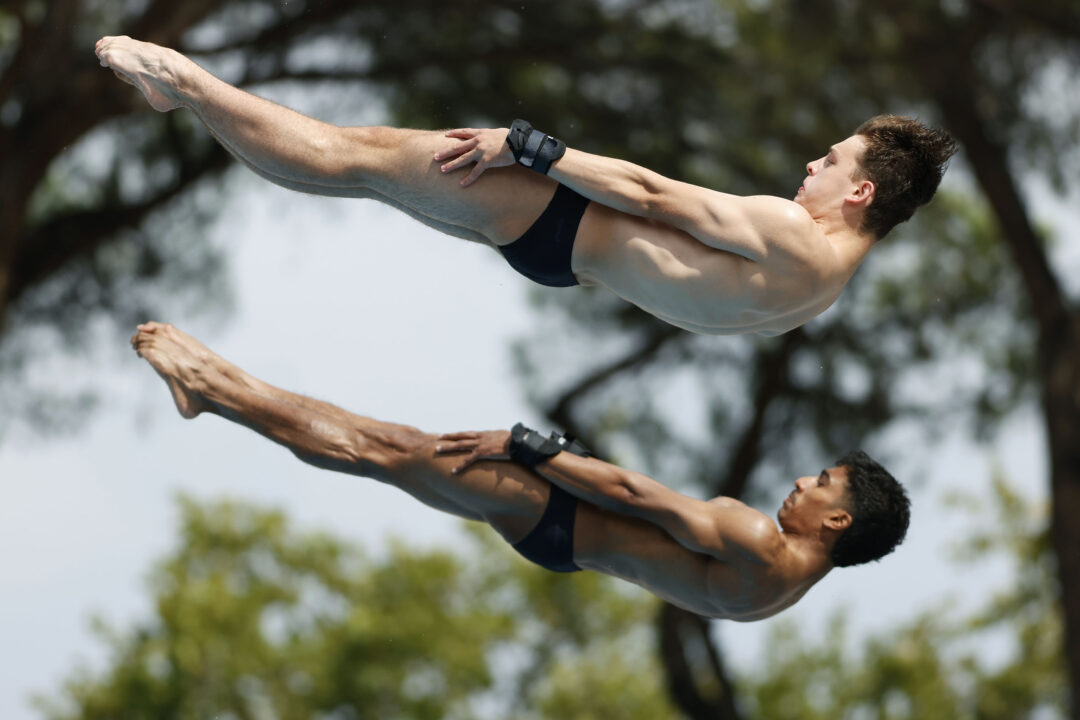 Great Britain's 12 diving medals marks its highest total ever at Euros, bettering the country's previous mark of 11 from 2016 in London.  Current photo via LEN

Then in the last event of the meet, Noah Williams and Ben Cutmore took silver and bronze, respectively, in the men’s 10m platform final to up Great Britain’s medal tally to 12. It’s the most diving medals ever for the Brits at Euros, bettering their previous mark of 11 from 2016 in London.

“I am very proud of today,” said Laugher, a three-time Olympic medalist who also won gold this week in the men’s 1m springboard final. “Tony really stepped up. It was the first big outdoors competition for Tony and we did well. It is a big day for us. It was a really strange season with three big events. 2014 was the same and I didn’t do well then at the Europeans. To be honest, for us the peak of the season was in Budapest where I think we were even unfairly beaten. I am really satisfied and proud with what we have done here.”

It marked the third major championship medal in just two months for Laugher and Harding since they debuted together as a duo at the World Championships in June. They took silver in Budapest before clinching gold at the Commonwealth Games earlier this month.

“I had to wait so long for this,” said the 22-year-old Harding, who is competing on the senior circuit for the first time this season. “It was tough. Before the event, the clouds came and I was struggling with the conditions. I am not used to these outdoor conditions. I am over the moon to be diving along Jack and the fact that we will spend the next three years diving together. We need consistency, in order to learn and prepare for bigger things next year.”

“It really feels incredible to win this,” Cutmore said. “For me missing out on a medal twice at the Commonwealth Games made me really hungry to get one here. This morning I looked at Kyle’s gold medal from the other day and said to myself I want one of those. I was totally focused on one thing at a time. I do this kind of a brain freeze. It really helps me to relax. I think we are a very good pair. We wanted to come forward, so in order to do that we tried to go steady and that’s what we did. I really like this pool so it’s also helped as well. I am really happy.”

The mixed event was even closer as Kothari and Lois Toulson once again snuck past the Ukrainian team of Sereda and Sofiia Lyskun by a slim two-point margin.

“Going into the finish we knew we had to look for 70 (points) in the last round,” Kothari said. “Having seen the Ukranians’ score I told Lois, ‘We need to go over 300,’ and we did it. I am really very happy. This is my first senior European medal. I think it is good to be on the team in different events, I think it makes us more versatile and also builds confidence for other events.”

“I am really emotional at the moment,” Pellacani said after her women’s 3m springboard win. “It was not easy. I wanted this medal really badly so I am really satisfied. I worked very hard for this, I love this pool, it means a lot to me to compete here. This medal is very special to me, I really love the 3m springboard, so I was very excited. There was a lot of pressure and even though I am always very competitive, my adrenaline was really running high today, but now that I have succeeded, I feel amazing.”

Elena Bertocchi also had a big week for Italy, battling back from a 2019 injury to take gold in the women’s 1m and silver in the women’s 3m synchro alongside Pellacani.

“I really want to thank the Italian Army and Federnuoto, which have been supporting me during all the months I couldn’t even step out of the bed because of the pain,” Bertocchi said. “I’ve been fighting with an injury since 2019, but the past nine months have been the hardest and this victory means a lot to me!”

After placing second behind Laugher in two events (men’s 1m and men’s 3m synchro), Italy’s Lorenzo Marsaglia reached the top of the podium by pulling out a victory in the men’s 3m springboard.

“I’m really happy, I’m speechless,” Marsaglia said. “My legs were shaking on the springboard. Beating Jack is the most wonderful thing I could ever imagine doing. The cheer here at home is so strong that it felt like having an extra man on the field for me.”

After two runner-up finishes, the 16-year-old Sereda finally broke through with a victory on Sunday in the men’s 10m platform, beating out Williams and Cutmore for the gold. In 2019, he became the youngest Euros champion in history at age 13. Sereda also earned silvers in the men’s 10m synchro and mixed 10m synchro.

“I am actually really proud of myself and what I’ve just done,” Sereda said. “I didn’t believe in myself that I could do it again so I am extremely happy. The first time I won the 10m platform at the Europeans was in 2019. I was just 13 years old and I didn’t feel any pressure or stress. To repeat that for the second time is so much harder but I did it and it feels amazing. The whole team did well here in Rome. I would like to dedicate this European title to my country Ukraine that right now needs all the support and help it can get.”

And all of this was accomplished without Tom Daley on platform, amazing