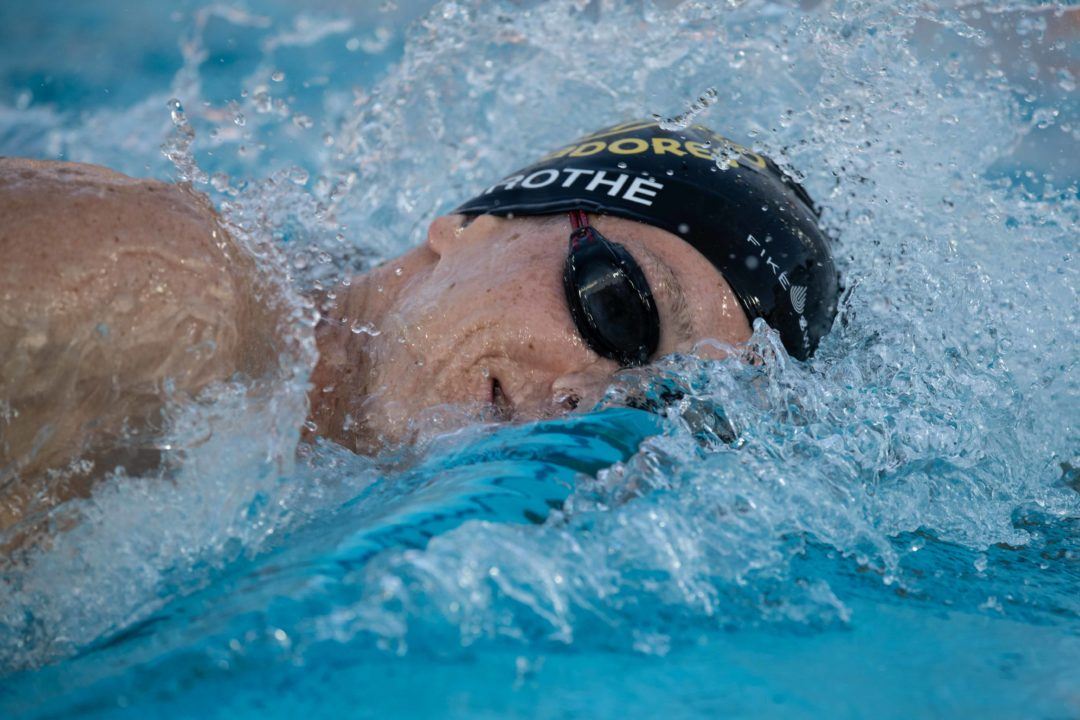 Zane Grothe, the fastest American in the event currently, will look to beat the field in an event that features no returning Olympians from 2016. Current photo via Mike Lewis/Ola Vista Photography

With both Connor Jaeger and Conor Dwyer retiring since the 2016 Olympics, the 400 free will be one of only a few events on the men’s side that won’t have a returning Olympian (in the event) vying for a roster spot.

Since the start of the Olympic qualifying period, Zane Grothe has been the fastest American in the event and will enter Trials as one of the favorites to make the Olympic team. He dipped below the FINA Olympic A cut in the event at the 2019 World Championships when he took 8th in finals with a time of 3:45.78, but has only broken 3:50 three times since then.

Zane Grothe will enter Trials as the only swimmer to have dipped below the FINA A cut in the event. (Photo: Jack Spitser)

While Grothe will enter trials with the fastest time by nearly two seconds, he is followed by a slew of young swimmers poised to compete for an Olympic birth. While these swimmers all have best times within a few seconds of each other, none have been able to dip below the FINA “A” standard of 3:46.78. Based on the Olympic qualifying process, a nation with just one swimmer under the “A” cut would only be allowed to enter one swimmer into the Olympics in that event. That shouldn’t ultimately be an issue for Team USA, but in this particular event, the U.S. will need someone beyond Grothe to make a solid time drop to get under the cut.

Of those young swimmers, Kieran Smith holds the fastest time and is the only competitor outside of Grothe to have represented the US internationally at the senior level. The American record holder in the 500 free, Smith swam to a 3:47.72 in the event at the 2019 US Open, finishing five seconds ahead of Grothe. Since then he has shaved .01 off of his time, hitting a 3:47.71 at the Atlanta Classic last weekend.

Having just finished his freshman year at Georgia, Jake Magahey will likely make a serious run at a roster spot in the event. Coming off a college season that saw him drop over six seconds in the 500 yard free to claim the NCAA title over Smith, he’s poised to make a similar drop in the long course pool. He has already made improvements in the event this year, hitting a 3:48.56 to take second at the Atlanta Classic behind Smith.

Another swimmer coming off his first year of college, Jake Mitchell will be one to watch in the event. He will enter trials with a best time of 3:47.95, a time that he swam at the 2019 World Junior Championships to take 4th. At that meet he finished over four seconds ahead of Magahey, who took 8th in the race.

D’Arrigo will look to make his first US Olympic Team after competing for Italy at the 2016 Games. (photo: Mike Lewis)

One of few athletes in the field to have competed at the 2016 Olympics,  Mitch D’Arrigo will make his first attempt at qualifying for the United States after switching his sports citizenship from Italy to the United States following the 2016 Olympics. In 2016, the former Florida Gator competed for Italy in Rio, finishing in 39th in the 200 free. While he’s raced the event four times already this year, he hasn’t dipped below 3:50 since 2019, when he swam to a 3:48.39.

The top seed in both the 800 and 1500 freestyles, Bobby Finke enters Trials holding the 4th fastest time in the 400, almost three seconds behind Grothe. His best time of 3:48.17 comes from the 2019 Summer Nationals, where he took 3rd behind Australian Elijah Winnington and Mitchell. He was joined in that race by a group of likely Olympic Trials A-final contenders including, Eric Knowles, Trenton Julian, and Zach Yeadon.

Of the swimmers from that race in 2019, the one most likely to break into the top-8 at Olympic Trials looks to be Trenton Julian. Julian is coming off an NCAA season with Cal where he broke 4:10 in the 500 free for the first time at the Pac-12 Championships, before repeating the feat again at the NCAA Championships.

The 2019 Pan American Games champion in the 400 free, Andrew Abruzzo currently holds the 8th fastest time from an American heading into Trials. He will enter the meet with his best time of 3:48.41, his gold medal time from 2019.

Outside of the predicted top-8, there are numerous swimmers who could easily break into the top-8 if they hit their taper well. Trey Freeman, Brooks Fail, and Zach Yeadon are all coming off of strong NCAA seasons in the distance freestyle events. US Open Water National Team staple Jordan Wilimovsky is currently the 12th fastest American in the event and was the first American to qualify to compete in both the pool and open water when he swam the 1500 and 10k marathon at the 2016 Olympics.

Wave I Standout: Liam Bresette (PB: 3:54.42) – After swimming to a lifetime best in the 500 free at the 2020 Pac-12 Championships, we’ve seen limited racing from Bressette over the past year as the Arizona State team sat out it’s NCAA season. Last week he narrowly missed his best time in the event at the Pro Swim Series in Indianapolis when he touched in 3:54.86 for 12th.

Did Jack and keiren not go faster this weekend ?

They updated their times in the chart but not in the body of the article.

wait a dang minute….did swimswam really just leave out Townley Haas?! okkkkkkk i know he’s not a pure distance swimmer but he can do the 400 real quick & definitely enough to be in the conversation for the A-Final

It is a surprise to learn that there has only been one US man swim faster than the 400 free FINA A cut since March 2019.

Has there ever been an Olympics when the Americans failed to send 2 swimmers in a event?

They scraped by in the 1500 a couple of times back when the A/B times were introduced. Haven’t read the selection criteria but Ibl would think if they are outside the standard and Grothe is Top 2 he is still getting nominated based on his previous QT.

now I wonder too!