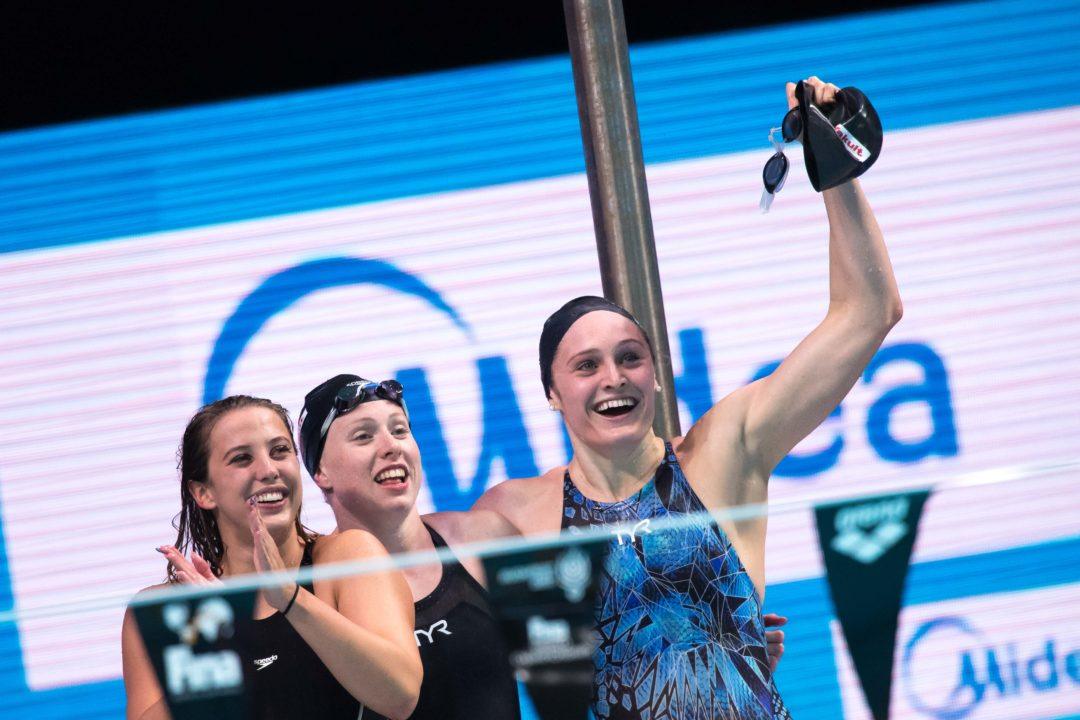 The American, Canadian, and Aussie women will all be gunning for the 2019 medley relay title. With an all-star line-up, it can be anyone's race. Archive photo via Mike Lewis/Ola Vista Photography

Since 2005, the women’s medley relay has been a game of musical chairs. The Aussie women won back-to-back titles in 2005 and 2007, followed by China’s 2009 medley relay title. In 2011, the US women won their first title since 1998 and earned their first back-to-back title in 2013. China then came out on top in 2015, with the Aussies settling for bronze and the US women falling to fourth.

But, 2017 the US women dominated the medley relay with a world record time of 3:51.55. Imposing threats on the American quartet, however, are the Aussies, the Canadians, and the Russians. With the relay scheduled on the final day, rather the first day in previous editions, it can be a dogfight for the finals stroke spot for any country’s relay.

Returning Worlds/Pan Pacs members Kathleen Baker and Canada’s Kylie Masse will for sure duke out the opening leg of the race. Both Baker and Masse have held the 100 back world record at different points in time. Masse comes in as the defending World champion, where she held the WR for a year at 58.10. Then, Baker broke that WR at 2018 US Nationals with a 58.00, which is also a year old. Yet, in the updated US Worlds roster, Baker chose to drop the 200 IM and focus only on backstroke after getting sick in April that led to a rib fracture from an associated cough. The #2 spot for the US backstroke leg is Olivia Smoliga, who swam a national-leading time of 58.73 this year. Baker’s season best hails from her most recent meet in mid-March with a 59.00.

The Aussie relay, on the other hand, will not have the experienced Emily Seehbom opening their relay after finishing 4th at Aussie Trials. Instead, Minna Atherton and Kaylee McKeown will continue to carve out their senior careers. At Trials, Atherton won the 100 back with a 59.20 with McKeown also qualifying in a 59.28. With only a tenth separating the duo, who will fill in Seehbom’s shoes?

After the backstroke, Canada and the USA will likely take the early lead with the open Aussie leg closely behind. Another American world-record holder, Lilly King, will steal the spotlight in her signature event. For Canada, Kierra Smith‘s season best of 1:06.53 will allow Canada to stay in top 3 contention. Aussie breaststroker Jessica Hansen swam a 1:06.91 this season, but split a 1:05.82 for the 2018 Pan Pacs winning relay.

Yet looming around the corner is Russian breaststroker Yulia Efimova, who has split under 1:04 before in her career. Russian backstroker Anastasiia Fesikova will also even out the backstroke race, as in 2017 when Russia, the USA, Canada, and Australia were all separated by six-tenths. As in 50/100/200 breast, Efimova will be King’s closest challenger when entering the water.

Entering in for butterfly will be Kelsi Dahlia, and while her season best is 57.45, the national champion split 56.30 during the 2017 world record performance. 19-year-old Canadian Maggie MacNeil and 25-year-old Aussie Emma McKeon have swum faster than Dahlia this season, putting up 57.04 and 56.85 respectively. Alongside Russian flyer Svetlana Chimrova, it will be a great race between the teenage newcomer and the veterans.

The final leg of the race among the countries can truly be unpredictable. The Americans have Simone Manuel, who split 52.23 during the 2017 final and 52.22 during the 2018 Pan Pacs final. Manuel’s season best is 53.30, which is 0.03s ahead of Mallory Comerford‘s SB of 53.33. Manuel has the most experience, considering she has been anchoring the medley relay since the Rio Olympics, but could face a challenge if Comerford comes out as the “hot swimmer” in the individual event.

However, the Canadians and the Aussies’ freestyle legs can impose a great challenge on Manuel. Australia’s Cate Campbell swam the world-leading time this season at 52.12, which is 0.09s off her lifetime best of 52.03 from the 2018 Pan Pacs. After Campbell’s underwhelming 100 free performance at the 2016 Olympics, she has been slowly gaining back her ground.

At the 2018 Pan Pacs final, Campbell anchored the Aussies with a blistering 51.19 to win the title. Alongside her SB, Campbell could upset defending Olympic champ Manuel.

For the Canadians, backstroke ace Taylor Ruck will flip on her stomach to swim this relay. At Pan Pacs, Ruck anchored the Canadians to a 51.72, which placed 4th in the medley relay final. Ruck’s season best stands at 53.26, just 0.34s ahead of Olympic champ Penny Oleskiak’s 53.60. The Russians may fall behind in this final leg, with freestylers Maria Kameneva and Veronica Andrusenko only swimming 53.80 and 54.89 this season.

Adding up the American, Canadian, Australian, and Russian’s fastest season bests for each eligible swimmer, the USA has a narrow 0.07s lead on Canada and 0.15s off of the Aussies.

Looking strong to improve on their 8th-place finish in 2017 is the Italian women, headlined by backstroke ace Margherita Panziera. Panziera has been sub-59 this season alongside Masse with a 58.92. Martina Carraro is also a 1:06 breaststroker, and along with 57-flyer Elena Di Liddo, should be able to keep up with the rest of the top contenders. World record-holder Federica Pellegrini will anchor the Italians, who has been 53.66 this season.

The Swedish team will feature world record-holder Sarah Sjostrom on the freestyle leg as NCAA champ Louise Hansson will swim butterfly. Hansson has been 57.35 this season while Sjostrom has been 52.76 in the freestyle just six-tenths behind Campbell.

China and Japan will also be top 8 contenders. The Japanese team will have a big hole to fill with Rikako Ikee out of the butterfly leg, who aided the team to a 3rd-place finish at the 2018 Pan Pacs. Stepping in Ikee’s spot will be Hiroki Makino, who has swam 58.39. While underwhelming, the Japanese will have 1:06-breaststroker Reona Aoki contend in the second leg of the relay. With the Chinese Worlds roster still unknown, they will have 1:07-breaststrokers Jingyao Yu and Ye Shiwen contend for the spot and power on the relay.

Dark Horse: The South African women were dead-last, 17th place, at the 2017 World Championships in this relay. They were a whopping 14 seconds away from a top 8 finish. In the last year, though, the women’s swimming scene in South Africa has exploded. Tanja Schoenmaker is now down to a 1:06 in the 100 breaststroke; in Erin Gallagher and Tayla Lovemore, the country has a pair of 58-second-or-better caliber butterfliers (Gallagher was 57.6 at Nationals). They need some work on the bookends, but teenager Mariella Venter has already been 1:01.5. If Lovemore is able to drop another few tenths in her 100 fly (she broke the South African Record on Friday in the 50, so it seems feasible), that allows Gallagher to shift to freestyle (where she’s been 54.3 this year), and suddenly this is a 3:59 relay. Only took 4:01 to final in 2017. The challenge is that South Africa seems hesitant to stack this relay – they didn’t use Schoenmaker at the Commonwealth Games, for example.

Baker might not be the backstroker if she is still slightly injured. Not much of a fall off if they have to use Smoliga.

Either will get the job done

I’d be curious if they’d consider Regan Smith if Baker is hurt and Smoliga is only 58.7ish. Smith has already been 58.4 this year and is on the roster in the 200 back only.

If Regan burns the house down in the 200 I would think they would strongly consider it. As you know relay picks are completely discretionary. If the coaches think she’s the fastest she’s on it no question. Obviously they’re not going to assess Smith based on what she swam a year ago!

The real key —- and I hope the coaches guess right —- is who has the legs left on the last night of the meet. Baker (and Seebohm) were tired, slower than their individuals last go round. Freshest legs will be the youngest legs and that would be Smith. Only one of the three who has legs for a 200 back at this point and the speed to do a 58 low. And might as well test her on a big stage, because she may be the #1 option going into Tokyo.

They would need at least 1:06 low on the breast leg for that, not sure that will happen. I would favor Canada over Australia. Not see any other nation than the US, Canada and Australia seriously fighting for a medal.

They wouldn’t though – given how fast C1 can swim in a relay, Jess Hansen delivering an ordinary split leaves the Aussies in a great position.

Australian women know how to deliver…unlike our men.. 🙁

Damn, I missed that at Rio. Was it Seebohm or C1, or who actually was it that delivered? Can’t remember.

In the relay, both.

According to form, Australia should win the World Championships and scare the WR, then collapse at the 2020 Olympics and not earn a medal.

Scribble I wish you weren’t possibly onto something!

If the aussies are top 3 after the breast then they may well do some damage! But without Seebohm’s usually reliable 58s that match the USA, Canada and Russia. They may have a lot of catching up to do after the mid way point.

Dahlia will be the key leg. If she gives the US a full second lead over Australia then Manuel will hold off Campbell.

Manuel is in C1’s head, and she’s absolute money when things are on the line. If they’re next to each other and C1 goes off slightly ahead, she’ll go out too fast and Simone will run her down a la Rio 100 free.

And the Pan Pac individual swims too…

Simone was in a post-NCAA, compressed LCM season. This year —- no collegiate season, dedicated pro-level LCM training year-round. It will be a completely different story. After the U.S. was so dominant in Rio, the PanPacs are a let-down year, and have been historically.

C1 always delivers in relay. You cite the Rio individual, but the two relays were quite another story

That’s only ever happened in the individual race. In relays C1 has utterly dominated Manuel.

Australia has Emma McKeon in fly. She could easily overtake Dahlia. US has to rely on their first two swimmers and build up a good enough lead to hold off the Aussies for the back half.