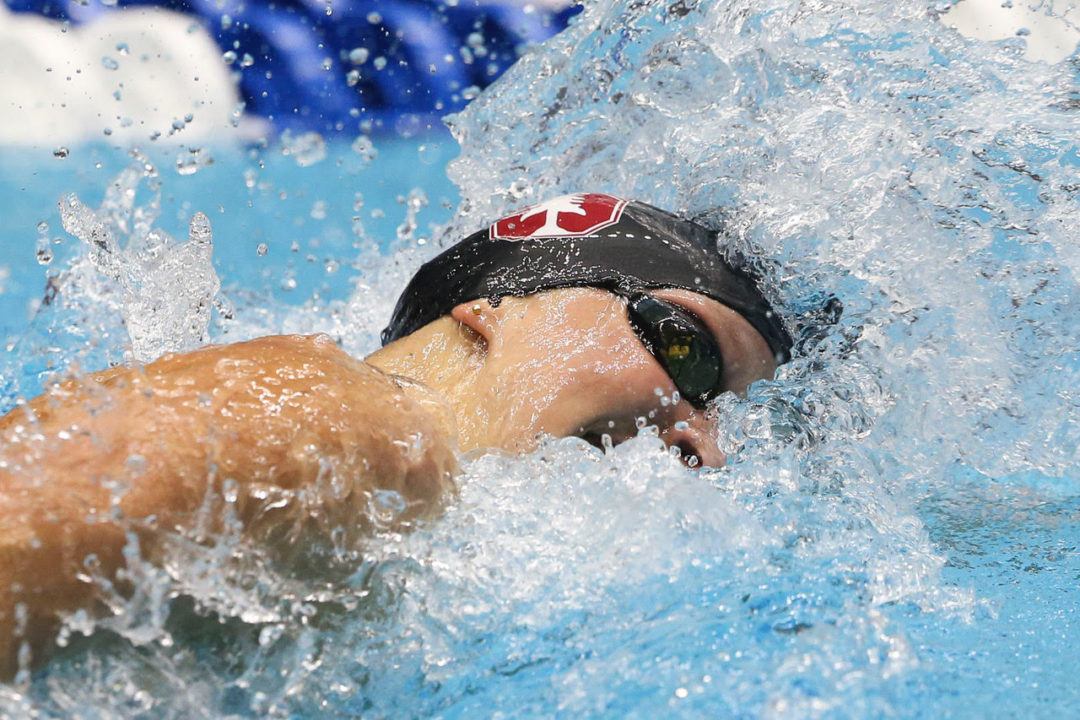 Katie Ledecky will look to lead Stanford to a second straight NCAA title in the 800 free relay. Archive photo via Tim Binning/TheSwimPictures.com

At the 2017 NCAA Championships the Stanford women absolutely dominated the 800 free relay on opening night, providing their competition with a little preview of what the meet would be like as they rolled to the title with a winning margin of 160.5 points. Though they’re the heavy favorites to win the team title again this year, they may have their work cut out for them to retain the 800 free relay crown.

Though the combination of Simone Manuel and Katie Ledecky seems virtually unstoppable in this relay, the Cardinal will likely be forced to leave the defending 50 and 100 free champion out of this mix this year. With the graduation of Lia Neal, Stanford no longer has a viable option to use as the anchor on the 400 medley relay other than Manuel (the relay she didn’t swim last year), with their next fastest free sprinter, Janet Hu, on butterfly duty (though unlikely, they could also use Ledecky in this spot). Without Manuel they’re still in title contention, but it won’t be easy.

Swimming without Manuel at Pac-12s they lost a close battle with Cal by just over a second. There’s been a bit of speculation that Stanford rested even less than usual for Pac-12s this year after a few swimmers peaked a little too early last season, but we won’t know for sure until the meet kicks off on Thursday.

Cal had freshman Robin Neumann led-off in a big best time of 1:43.38, a time she validated individually (1:43.6). Kathleen Baker and Katie McLaughlin had identical legs of 1:43.29, and Amy Bilquist finished it off in 1:42.66. All three of their returning swimmers were a bit quicker at NCAAs last year, including a 1:42.6 lead-off from Baker and a 1:42.0 leg from Bilquist. Holding McLaughlin and Neumann constant from their bests, they project to come in around the 6:50-6:51 mark as well.

Cal won’t be the only team challenging Stanford for the win, as Michigan boasts three swimmers ranked inside top-7 in the country this year, and four within the top-20. Their ace Siobhan Haughey, who was 4th in the individual 200 last year at NCAAs, was left off the 800 free relay at Big Ten’s as a precaution as it was rumored she wasn’t feeling well. Without her they still won in a time of 6:55.43, making them the third seed behind Cal and Stanford.

You can essentially throw that time in the trash and consider them the top seed, as their in-season add-up times equal 6:52.04, faster than Cal was to win at Pac-12s. Haughey proved she was fine winning the 200 free at Big Ten’s in 1:41.66, with sisters Gabby DeLoof and Catie DeLoof 2nd and 3rd in bests of 1:42.91 and 1:43.32 respectively. Rose Bi also PB’ed leading off the relay in 1:44.15, giving them a formidable foursome that could give Cal and Stanford fits.

The question with Michigan is, given three of their four swimmers went lifetime bests at their conference meet, will they be able to go better at NCAAs? Even if they all go about the same as their Big Ten times, with relay takeovers added in, they should finish right around where Cal and Stanford are projected. That makes for an incredibly exciting race, but with arguably the greatest freestyler of all-time on Stanford’s anchor, it’s tough to bet against them bringing it home. Of course, if Manuel ends up swimming, it’ll be a race between the Bears and Wolverines for 2nd.

Behind those three, there should be a great battle jockeying for position within the top-8, with four more teams sub-6:57 this season.

Along with Pickrem, the Aggies have junior Claire Rasmus, an NCAA A-finalist last year in the 200 free who was went a lifetime best 1:43.62 at SECs. Sophomore Katie Portz also had a personal best leading off their relay in 1:44.7, and senior Kristin Malone swam a full second under her PB on the third leg.

While Michigan has four swimmers ranked inside the top-20 this year, Virginia actually has four inside the top-18, including one who wasn’t even used on their relay at ACCs. Jen Marrkand, Paige Madden and Eryn Eddy have all been between 1:43-high and 1:44-low this year (all 1:43 on the relay), and then they have Megan Moroney who ended up unloading a best of 1:43.60 to take 2nd individually after being left off the relay. In addition, they have two more swimmers who have gone 1:44 this season, showing some great depth. They’ll be in the mix for a top-4 finish this season, and the future is bright in this event with only one of their six sub-1:45 swimmers graduating.

In this second tier, Virginia look to have the best chance to improve, with the other three likely to be very similar to their conference times. Nonetheless it should be an exciting battle.

Barring a DQ or a big upset those should be the top-7, with a close race brewing for 8th. Georgia, Texas and Tennessee have all been 6:58 this year, and Minnesota has been 6:59.5. The Longhorns were 4th last year, but lost their two fastest legs in Madisyn Cox and Tasija Karosas to graduation. Another team to watch for is Kentucky, who return 3/4 swimmers from last year’s 6th place team including breakout star Asia Seidt (1:43.5 split at SECs) and Geena Freriks (1:43.0 split last year).

If Simone swims the 800 free relay again, that’s a wrap.

highly doubt she will.

She did last year.

Last year they had Neal to anchor the 400 medley relay. She had a 46 split which was enough for them to win (with a cal DQ) this year, there is probably no one within two seconds of what Manuel will split in that relay.

I’m not picking Standford to win any of the free sprint relays. There is no current replacement for Lia Neal. They don’t have the speed. The numbers just don’t add up. Simone can’t do it alone. That’s why I’m choosing to put her on the 800 free relay instead of the 200 free relay. Stanford can win both medley relays.

I had the same thought… except they had Lia last year to throw on the end of a medley relay instead of Simone. I dont think they’ll have that option this year to subsitute another freestyler on the relay. My money is still on Stanford for this relay, because I think Drabot and Forde will show up much bigger than they did at PAC12s