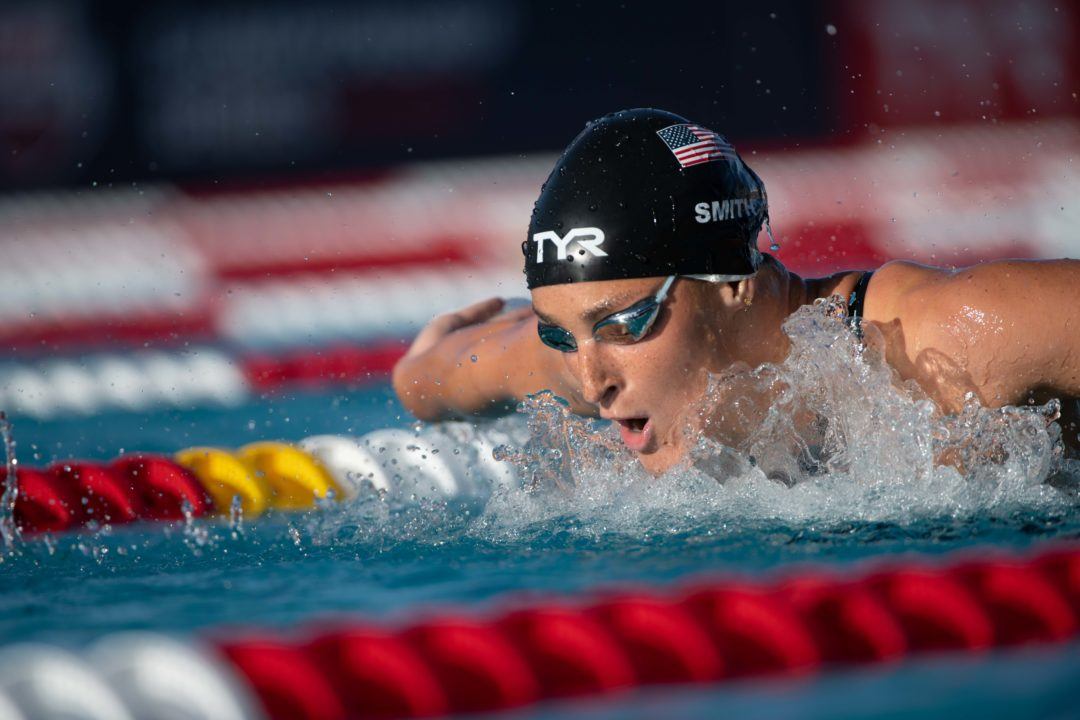 Leah Smith is on track to win her second consecutive national title in the women's 400 IM. Archive photo via Mike Lewis/Ola Vista Photography

The women’s 400 IM at U.S. Nationals had the potential to be an epic battle between some of the country’s top swimmers. But now, under various circumstances, the top two spots look to be locked down for Leah Smith and Melanie Margalis.

Katie Ledecky, the sport’s most dominant athlete, recently branched out from her traditional freestyle events to the 400 IM during the college season, setting the American Record at the Pac-12 Championships and finishing as the runner-up to Stanford teammate Ella Eastin at NCAAs. However, despite being the 4th fastest American this year at 4:38.88, she hasn’t entered it at Nationals.

Eastin, who shattered Ledecky’s AR at NCAAs by nearly two seconds, has been absolutely on fire all year. She was disqualified at last summer’s World Trials in this event after initially placing 2nd to Smith (in a PB of 4:36.96), and was primed for redemption here. However, she has recently come down with mono, and is now questionable to compete in Irvine. Even if she does, the 400 will be the toughest of her four entries, and the smart move may be to wait it out until day 5 and give the 200 IM a shot.

Madisyn Cox was also expected to be a player here, but received a 2-year doping suspension last week for Trimetazidine. While she specializes in the 200, winning a bronze at last summer’s World Championships, she did go a personal best of 4:37.94 in March before the suspension was handed out.

So with no Ledecky or Cox, and Eastin’s status up in the air, it looks like Smith and Margalis have a clear path to 1st and 2nd.

Smith really broke out in this event last summer, winning World Trials in a massive best time of 4:33.86. She took a bit of time off early on this season but has been rounding into form nicely in the lead-up to Irvine. She’s steadily improved from May (4:43.2) to June (4:39.3) to July (4:37.6) on the Pro Series, and projects to be right around where she was last year, if not better. Before she went that 4:33 in Indianapolis, her only in-season swim of the year was a 4:42.94.

Margalis hasn’t raced this event at a selection meet in four years, and while she was still hoping not to swim the 400 IM at Nationals back in May, it looks like she will. There’s really no reason not to. She noted in that interview at the Indy Pro Swim that her training group in Georgia had really been putting in the 400 IM work recently, and it certainly showed. After swimming a personal best in January at 4:37.43, she clocked 4:36.81 to win in Indianapolis over the likes of Eastin, Ledecky and Hali Flickinger. She’s the fastest woman in this country this year, and with some rest, could be getting down in the 4:33-4:34 range.

Flickinger, who trains with Margalis in Georgia, hasn’t really seriously competed in this event either over the past few years. However, she’s done three of her four fastest swims ever this season, including a best of 4:39.04 in early July, and is now certainly in the running for a top-3 finish. The 24-year-old is also entered in the 100 fly on day 3, so she may not end up even swimming this (especially if she locks up a qualifying spot on day 1 in the 200 fly), but she’s not averse to doubles and could very well do both (at least in prelims, they are back-to-back so the turnaround in finals would be pretty tight).

While Ledecky and Eastin may both be absent here, Stanford will still be well represented with rising sophomore Brooke Forde and rising junior Allie Szekely.

Bethany Galat, who was also DQed for the Lochte rule last summer, has a season-best of 4:43.8 this year as well, five seconds better than she was before going 4:37.69 at the 2016 Olympic Trials. No one in the field has a single stroke as world class as Galat is in breaststroke, and if she can use that to her advantage she could jump up into the top-3.

Two others in the running for a top finish will be Ally McHugh and Evie Pfeifer.

McHugh was 4th at World Trials last year in 4:40.25, dropped that time by .03 to win silver at the World University Games, and then nearly took that down with a 4:40.51 in May. Pfeifer has improved leaps and bounds this year, improving her yards time by seven seconds to take 11th at NCAA in her freshman season with Texas, and since then has knocked her LC best down by five seconds with a 4:41.95 in Columbus. Both of their trajectories are pointing straight up.

Others who will be in the mix include current and future Florida Gators Kelly Fertel, Savanna Faulconer and Vanessa Pearl, 15-year-old Mariah Denigan from the Northern KY Clippers, and 16-year-olds Kathryn Ackerman and Emma Weyant.

Darkhorse: Asia Seidt. Seidt’s personal best in the event is just a 4:47.28 from last year, but she was a 4:48.3 earlier this month in Columbus where had a breakout performance in the 200 IM (2:12.6). It’s also worth noting her 4:48 was from the prelims, scratching out of the final, so there may be more in the tank there.

Note: we’ve left Ella Eastin out of our previews, because of the uncertainty about whether she’ll race. Even if she’s at less than 100%, she’s probably still good enough to make the final, we just don’t know if she’ll be there or not.

Is Margalis even swimming this? This events seems wide open to me

If she gets on the team in 200 free on day 2 then why to bother with IM races. If she doesn’t succeed in free event then 400IM will be the best remaining chance for her to be selected for Pan Pac and WC.

She’ll be a prohibitive favorite in the 200 IM, but might not want to wait that long…

It’s true she has good chances at 200IM after Cox is gone. But it will be too risky to put everything on just one race at the last day of the meet. Something unpredictable like broken goggles or sickness or simply bad day can happen.

Margalis has had great freestyle closing speed lately and has a great back half. This race should be close and exciting between her and Leah.

To the whole no one has a single stroke as world class as Galat is in breastroke-Leah Smith’s freestyle begs to differ.

Leah Smith has probably the toughest program at Nationals: 200-400-800-1500 free and 400IM. Why did she entered that many events? Will she swim all of them? If not then which event will be dropped? It can be 400IM.
Also will she be tapered for this meet? I think her major competitor this year is Ariarne Titmus in 400 and 800 free. In both events Leah has better personal bests and in both events Titmus declared herself superior of everybody leaving Ledecky just two years to reign. It can happen to be the competition of ambitions between them. Therefore she may skip 200free and 400IM in Tokyo. If so she has to swim these events at Nationals to have options… Read more »

She skipped the 1500 last time

At WC but not at Trials.