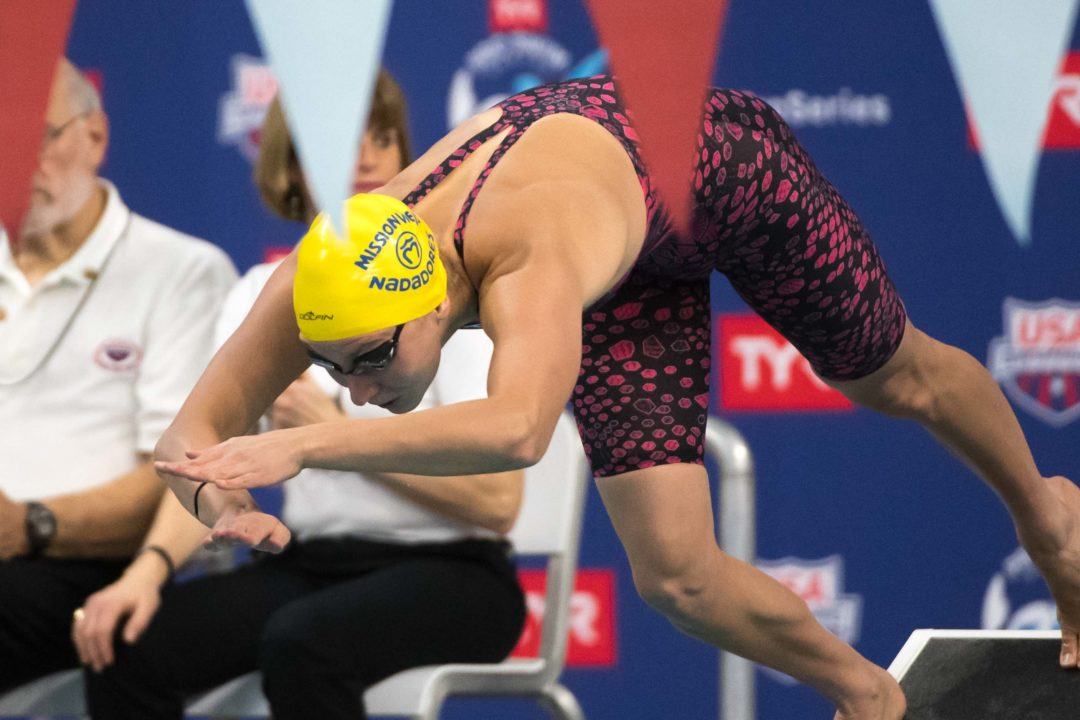 After winning the 50 free shootouts in Austin, Margo Geer is looking to come out on top in another round of 50 frees. Archive photo via Mike Lewis/Ola Vista Photography

It’s the last night of finals at the 2018 TYR Pro Swim Series stop in Mesa and swimmers are getting ready for the 400 free, 50 stroke shootouts, and 200 mystery IM. In the shootouts, the top 8 swimmers in each of the respective strokes will compete in the quarterfinal. The 4 fastest swimmers then move on to the semifinal, with the fastest 2 from the semifinal moving on to the final. Those swimmers then go head-to-head to determine the winner. In the mystery IMs, swimmers won’t know which stroke order they’re swimming in until they draw a lane number. The stroke order varies from lane to lane.

It was all Marwan El Kamash tonight as he was the only swimmer to break 3:50 tonight. El Kamash is the Egyptian Record holder with his 3:46.3 from last summer’s Worlds. His teammate, Indiana postgrad Zane Grothe, finished 2nd as he held off Jordan Wilimovsky down the stretch. Wilimovsky is an open water World Champion and Grothe is the American Record holder in the short course 500 free.

Leah Smith completed the 200-400-800 sweep at this meet as she dominated in 4:07.25. This was her first meet of the 2018 season, but she was still a few hundredths faster tonight than she was in the final at this meet last season. Runner-up Hali Flickinger was the only other swimmer to break 4:10, finishing just a few tenths sshy of her season best from Atlanta. Cierra Runge nabbed another bronze as she outpaced Winter Nats 500 champ Ashley Neidigh (4:15.05). and Vietnamese Record holder Vien Nguyen (4:16.71) was in position to challenge Neidigh for 4th, but Neidigh and Sophie Cattermole (4:16.31) pulled ahead in the closing meters.

Leah Smith got to start with freestyle out of lane 1, flipping in 28.07 to take the early lead. Smith then had to swim backstroke, but Zoe Bartel started to catch up as she was swimming fly. Isleta eventually took over the lead with free on the 2nd leg. Smith took over the lead again as she swam fly on the 3rd leg, but she had to swim breast on the final lap. Isleta and Bartel both had to finish with breast as well. Smith was able to hold off the field in 2:18.19, followed by Callie Dickinson (2:18.79) and Eleanna Koutsouveli (2:18.85).

Daniel Sos led with a 25.93 free leg up front, followed closely byASU’s Grant House. Gianluca Urlando then took over by 3 seconds as he had free on the 2nd leg. He still led through the 3rd leg, but Sos was catching back up. Both men had to close with breaststroke. Urlando was able to hold off the field in 2:06.09, while Jarod Arroyo swam free on the final leg to touch 2nd. Arizona’s Isaac Stump swam back on the final leg to run down Sos for bronze.

How did Lia Neal finish 5th in the first Quarterfinal, by then finish Second overall in the 50 Free? I thought only the top 4 move on?

Normally yes. I’m not sure why, but Kennedy didn’t swim the semifinal, so Neal got bumped up.

Wonder how Comerford will swim at nationals this summer— hard to gauge what these times mean when likely she isn’t broken or into crazy hard training coming off a break and college season.

I don’t know what Mallory will prioritize…improving the 200 closer to her short course level, or more speed toward the 50/100. None of the long course races suit her as well as the 200 short course with all those turns and underwaters.

In watching these races it’s typically the swimmer who stays underwater longest who has the edge. I have no idea why they don’t make that the ultimate priority. If it’s me I’m not taking a stroke until forced.

Mallory Comerford’s best event in long course is by far the 100 free. She must focus on that event for Tokyo. She must continue to take power and work her speed. 50 free/100 free more than 100 free/200 free. If she wants an individual medal and especially the best of the medals in 2020 that’s clearly in the 100 free. No 100 fly in individual and no 200 free in individual earlier in the meet if she wants to beat girls like Simone Manuel or the Campbell sisters. She has a 52 low potential in the 100 free. Her goal in the next 2 years must be to lower her 50 free PB to 24.20/24.30 and the 52 low in… Read more »

In this 50 free competition she had the longest underwater. That was the way she got under 1:40 in SCY. Her 200 free at this meet doesn’t look promising. Besides Ledecky and Smith cannot predict now who else will be on 4×200 relay.

Dullest one of these meets in quite a while

Adrian wasn’t the greatest either, weird

It was a really quick turnaround, especially because a lot of the swimmers stopped between the semifinal and final to sign autographs for kids on the spectator side. Though that one race did seem a bit rougher than the other finals.

Damn, Smoliga had a huge swim tonight. She will be a force in the 100 back, which I think might be the strogest event in the world right now.

I don’t see a write up for Bergen tonight, but Phillip Heintz went 1:56.67 for the 2nd fastest 200 IM of the year, and Sarah Köhler went 8:20 in the 800 free. Germans are using this meet for Euros qualifying.

Where are you getting Chinese Nats results?

Nice to see the yanks adopt a knockout “skins” event

Big fan of the format at meets like this, always interesting to see how folks do in them

I thought I would hate it, but really enjoyed it. The only reason I tuned in was to see Nathan Adrian. Glad I did.

Hey! I would have placed in that heat of women’s 400 free with my best time as a 13 year old! (It helps that the 8th place swimmer practically stopped after 200.)

She improved her time at 200 free.