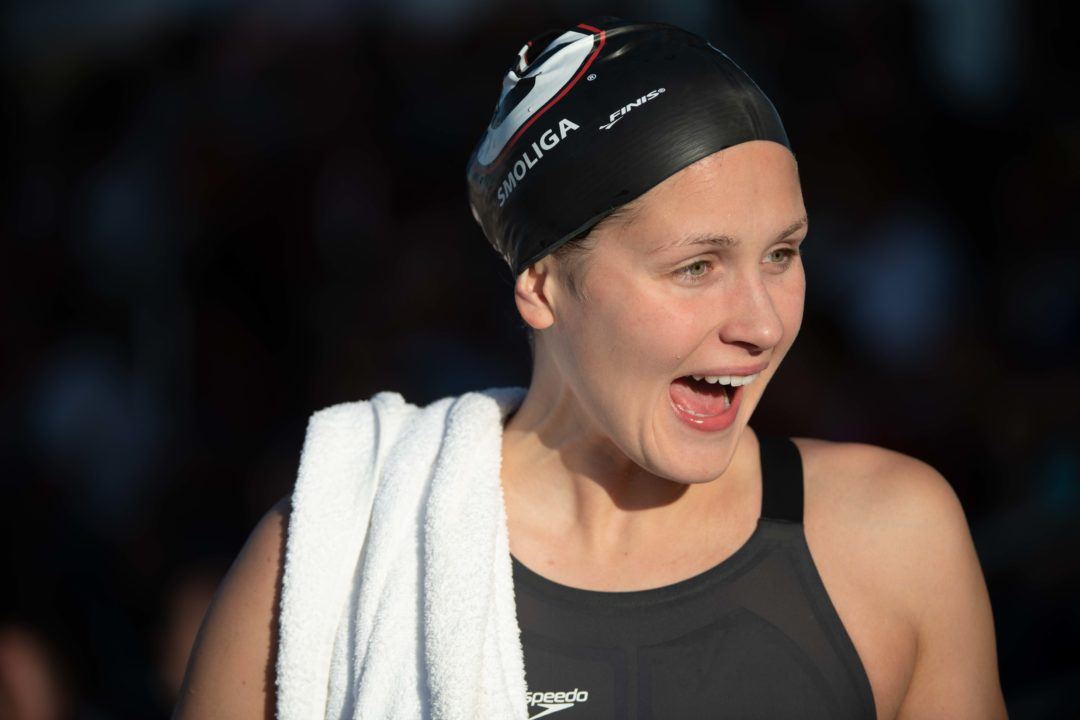 Olympic backstroker Olivia Smoliga put up a lifetime best in the 50 back shootouts at the 2018 TYR Pro Swim Series stop in Mesa, and it was an American Record to boot. Current photo via Mike Lewis/Ola Vista Photography

Olympic backstroker Olivia Smoliga put up a lifetime best in the 50 back shootouts at the 2018 TYR Pro Swim Series stop in Mesa, and it was an American Record to boot. Smoliga, who knocked 5 seconds off her 200 back time earlier in the meet, took down the record as she raced fellow National Teamer Ali Deloof in the final round. She touched in 27.43, clipping the former mark of 27.48 done by Kathleen Baker at 2017 Worlds.

I’m not sure if it’s really relavant but the wind looks like it is at her back.

The wind that day wasn’t bad. The first 2 days were a different story.

Why is she wearing a Speedo suit? Didn’t she sign with finis?

Not sure if finis has a FINA approved racing suit yet

They do. They have MANY approved suits.

not really relevant here but here’s a cool video of Abbey Weitzeil.
https://www.youtube.com/watch?v=1FcNiirTV1Y

Thank you for the link. I really hope to see her under 53sec again.

Doesn’t count since she wasn’t the lead off swimmer.

52.56 does count. How many American sprinters besides Weitzeil do you know who could split under 53? Four? (Manuel, Comerford, Romano and Ledecky ) Who else?

Bobo, when I said that i wanted to see her under 53 again the only thing it meant was that I wanted to see her again in that beautiful form that she had in 2016. The year when she was considered by very many including you the #1 American sprinter heading into Olympic Games. Her split 52.56 was the best performance on this American record silver Olympic medal relay. I wished her to be again among leading American sprinters. If you didn’t get it, then I’m sorry. That is where my abilities in English language end. Unfortunately you don’t know my mother tongue and my French is even worse than my English. So there is no reason to continue attempts… Read more »

Your English is better than mine.
You’re from?

About PBs, it’s not a question of desire or not to understand. I just responded to your first comment above. She has never been under 53 flat start. That’s just a fact. Her 52.56 relay split is relatively logical compared to her PB. Generally you add 0.6/0.7 s to the relay split and you have the flat-start time. She was in Rio in 53.20/53.30 shape. Do I consider the best time of someone her best? Yes. We can’t compare crazy Lezak’s anchor leg next to Bernard in Beijing to Lezak’s best time flat start. Did he swim the best race of his life that day? Yes. Did he give the best… Read more »

“Louis, I think this is the beginning of a beautiful friendship.” Casablanca
You are asking of my personal info that I would rather not providing on public anonymous forum. If you really want to know I can give it to you via private channel [email protected]
The country where I was born and educated doesn’t exist anymore on the world map. The area where I was brought up had a strong historical influences of at least five cultures and languages. It doesn’t mean that I’m fluent in five languages but I lived among people who care less about purity of the language considering it just a communication tool. Therefore those people had well developed sense of humor and… Read more »

How many American girls have split under 53 in history?
Maybe I forget one or two girls but I have in mind Weitzeil, Manuel, Comerford, Romano, Ledecky, Coughlin and Franklin.

You’re right. Torres in free and medley relays in Beijing in 2008.