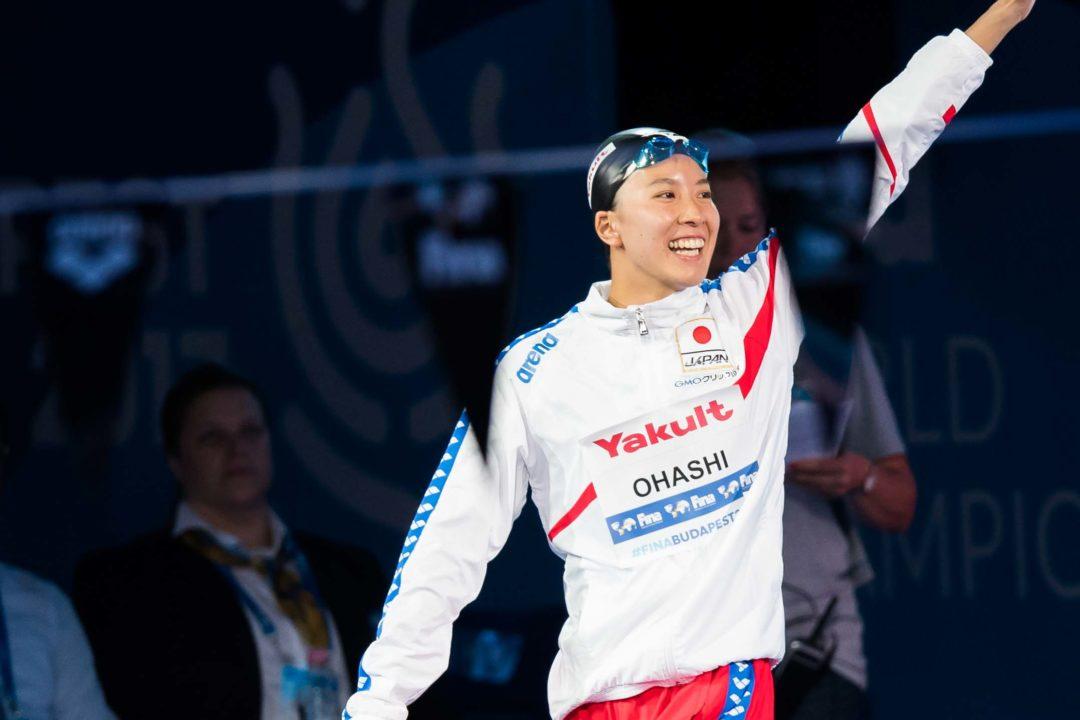 Swimmers are getting ready for the first finals session of the 2018 Pan Pacific Championships in Tokyo, Japan. We’ll see the races for the championship titles in the 100 breast, 200 free, 400 IM, women’s 800 free, men’s 1500 free, and mixed 400 medley relay tonight. For a recap of how the prelims session went, click here. On top of the good races to watch tonight, we’ll also see the Americans competing to see whose the fastest between the A-final, B-final, and finals at U.S. Nationals. The fastest 2 will qualify for 2019 Worlds in individual events.

World Record holder Lilly King headlines the women’s 100 breast, while Andrew Wilson and Michael Andrew will battle international stars Yasuhiro Koseki (JPN) and Wang Lizhuo (CHN) on the men’s side. Katie Ledecky leads the 200 free, with teammate Allison Schmitt and young stars Taylor Ruck (CAN) and Rikako Ikee (JPN) also in the mix. Andrew Seliskar, who had a breakthrough at U.S. Nationals and surprised many swim fans with his win in the 200 free, is the top seed in that race. Japan’s Yui Ohashi is the heavy favorite for the women’s 400 IM victory, while World Champion Chase Kalisz battles Japanese Olympic champion Kosuke Hagino in the men’s race.

**Tonight’s session will be streamed live on the Olympic channel.**

Katie Ledecky took it out quick, swimming under World Record pace up until the 350. She fell back from the pace after halfway, but still crushed her own Pan Pacs Record in 8:09.13. That was the 5th fastest performance in history and her 5th time under 8:10.

As usual, Ledecky was well ahead of the field, but there was an intense race for 2nd between Australian teen star Ariarne Titmus and Olympic medalist Leah Smith. Titmus took it out faster, but Smith started to close in on the back half. It came down to the touch, with Smith running out of room into the finish. Titmus broke 8:20 for the first time in 8:17.07 breaking the Oceania Record. That makes her the 10th fastest performer ever in this event. Smith clipped a hundredth from her lifetime best in 8:17.21, less than 2 tenths shy of the silver.

Jack McLoughlin took it out with the lead as Robert Finke trailed closely. Jordan Wilimovsky started to reel them in after the 500, moving up to take over the lead while Finke also pulled ahead of McLoughlin (14:55.92). The Americans battled closely, with Finke just a few tenths behind until the end of the race. Wilimovsky extended his lead in the closing splits, winning in 14:46.93. Finke broke 14:50 for the first time, taking a nearly 7-second chunk off his best in 14:48.40.

Olympic champ Lilly King popped off to the early lead as expected and was the clear leader throughout as she won it in 1:05.44, just a tenth slower than her time from Nationals. Australia’s Jessica Hansen came in clutch down the stretch, chasing down Japan’s Reona Aoki (1:06.34) into the wall in 1:06.20 for the silver. That was another best for Hansen, this time by over 4 tenths. Aoki is still chasing the Japanese Record after coming within hundredths of it in 1:05.80 earlier this year. She’ll get another chance later on at the Asian Games.

Japan’s Yasuhiro Koseki was quick off the blocks and took the lead early. It was a tight race through to the finish, but Koseki got the job done, out-touching Australia’s Jake Packard 59.08 to 59.20. That snapped the USA win streak tonight and gave the home crowd their first gold of Pan Pacs. Koseki was also just 4 hundredths shy of the Pan Pacs Record set by Japanese breaststroke legend Kosuke Kitajima back in 2010. Koseki has already been sub-59 this year with his 58.78 Japanese Record from the Mare Nostrum. Packard’s time was a best by a few hundredths and gives the Australians silver in both 100 breast championship races tonight.

Brazil’s Joao Gomes won the scrap for bronze, touching in 59.60 ahead of the USA’s Andrew Wilson (59.70). Wilson and U.S. Nationals winner Michael Andrew have locked down the 2 Worlds spots in this event. Andrew was back in 7th tonight with a 1:00.04.

The young talent took the spotlight here as Canada’s Taylor Ruck shot off the blocks to the lead and never let up. Ruck smashed the Pan Pacs Record as she held off Japan’s Rikako Ikee with a 1:54.44 to Ikee’s 1:54.85. That was a new Canadian Record for Ruck and a Japanese Record for Ikee. Ruck is now the 5th fastest performer ever in this event, while Ikee is tied for 10th.

Katie Ledecky, the favorite in this race coming into the meet, was just over half a second shy of her nationals time to take bronze in 1:55.16, marking her 2nd medal of the night. Allison Schmitt, the 2012 Olympic champion in this event, was just off the podium in 1:56.71 for 4th. She was about a second faster than that in Irvine and has secured her individual Worlds spot.

Katie McLaughlin (1:57.34) used her back-end speed to win the B heat, but couldn’t match her lifetime best 1:56.88 from prelims. Her prelims time would have bumped Leah Smith out of the top 4 between Pan Pacs and Nationals, but her finals time has her out of the top 6. The top 6 Americans in order are Ledecky, Schmitt, Gabby Deloof, Leah Smith, Simone Manuel, and Melanie Margalis. Only the top 4 are guaranteed a relay spot for Worlds.

Townley Haas, the 5th fastest American ever in this event, took the lead from the start. He was well ahead in 50.56 at the halfway point, but Andrew Seliskar made a big push to close the gap on the 3rd 50. Seliskar trailed Haas by a second at the 100, but started to run him down in the last 25. Haas was able to hold him off, winning in 1:45.56 to Seliskar’s 1:45.74. Seliskar did manage to run down Japan’s Katsuhiro Matsumoto, who went a lifetime best 1:45.92 for bronze, clipping his former best by a hundredth.

Blake Pieroni and Zach Apple battled for the B final win, with Pieroni out-touching Apple by just a tenth, 1:46.68 to 1:46.78. With that, Apple bumps Olympian Jack Conger out of the top 6 Americans for Worlds qualifying. Pieroni was 2nd at Nationals behind Seliskar, but with Haas posting the fastest American time to win gold tonight, Pieroni won’t swim this event individually at 2019 Worlds. The American top 6 in order after tonight is Haas, Seliskar, Pieroni, Conor Dwyer, Jack LeVant, and Apple.

It was all Yui Ohashi in this one. Ohashi and teammate Sakiko Shimizu broke out to the early lead, with Ohashi well in front. Ohashi dominated through the breast leg and held on to her huge lead to win by almost 2 seconds in 4:33.77. That makes her the fastest woman in the world this year. American Olympic medalist Melanie Margalis trailed by body lengths through the front half, but made up some ground on breaststroke and charged through the free leg to run down Shimizu (4:36.27) for silver in 4:35.60. Shimizu held on for bronze in 4:36.27.

Though Margalis took the silver tonight, she won’t be swimming this race individually at Worlds. Brooke Forde, who took 2nd at Nationals in 4:35.09, takes the 2nd spot by a few tenths. National champ Ally McHugh is safe with her 4:34.80 from Nationals, though she’ll be swimming in the B final later tonight. Forde was 4th in the final tonight in 4:39.22.

Daiya Seto was just a couple of tenths shy of the World Record split on the fly as he took off with the lead up front. Chase Kalisz trailed both Seto and Kosuke Hagino through the front half, but changed gears on the back half to dominate this race. Kalisz was over a body length behind after backstroke, but he was over a body length ahead of Seto by the end of the breast leg. He continued to extend his lead through the free leg, missing the Pan Pacs Record by just a few tenths to win in 4:07.95. Seto faded to 3rd in 4:12.60, while teammate and Olympic champ Hagino used his strong freestyle leg to pull ahead for silver in 4:11.13.

Jay Litherland was 4th tonight in 4:12.87, nearly running down Seto. Though he was a few second off his best, Litherland is still in a good position to take the 2nd Worlds spot. Sean Grieshop would have to make a significant drop in the B final to beat Litherland’s 4:10.21 from Nationals. Grieshop swam his lifetime best 4:12.72 at Nationals.

Japan and Australia battled it out with their 2 men up front and the women taking on the back half. Ryosuke Irie gave Japan the fastest back leg of  the field in 52.83, while Yasuhiro Koseki threw down a 58.57 for the fastest breast leg. After Rikako Ikee‘s 55.53 fly leg, Japan held a big lead, but Cate Campbell tore through the anchor leg in a blistering 50.93 for Australia to clinch the gold. The Aussies put together the 2nd fastest mixed medley relay ever in 3:38.91, while Campbell’s 50.9 was the fastest split in history and the first ever sub-51. Japan held on for a new Japanese Record and the silver.

The U.S. was never really in the race. They were behind off the start since they used a different strategy. They had the women bookend the relay, while the men took on the middle legs. World Record holder Kathleen Baker was out in 59.29, while Michael Andrew took on the breast leg in 59.21. There was too much ground for even Caeleb Dressel to make up as he put up 50.50 a fly split. Olympic champion Simone Manuel anchored in 52.71, but couldn’t run down the Japanese for silver as the USA took bronze.

If anyone wants to look at Pernille blumes crazy race again haha: https://m.youtube.com/watch?v=6JbxN0l2tFI

Come on dude. It’s not the first time someone has done that. Cate Campbell did it in the 200Fr final at Aussie Nationals. Blume presumably thinks she can find the 8 hundredths she needs to get the world record in the 50m. I think she can but she needs to improve her dive even more. Imagine knowing you are in shape to do a WR but knowing that after that race there is no other opportunity. that being said she should have been concentrating on getting a silver in the 100m. she had a chance of gold given Sjostroms form.

The difference is C1 did that at Australia’s SCM nationals, in the off-year of SCM worlds. She wasn’t the favourite in the 200 and wasn’t qualifying for anything, so she had nothing to lose by cruising the second 100.

no.she is a mardy little brat beaten by the world’s best. seeking to make a point and failing spectacularly.

I think she was just doing whatever she wanted to do, but hey, glad you know best.

Did she break any rules?

What does “mardy” mean? Some type of Aussie slang I guess.

I mean 23.98 isn’t failing spectacularly. It is failing, but also really really fast.

I was NOT expecting the hand-touch there and it surprised me way more than I expected.

4:30 am on the east coast…. shEeeeeeEEsh

..is it bad that i just stayed up…