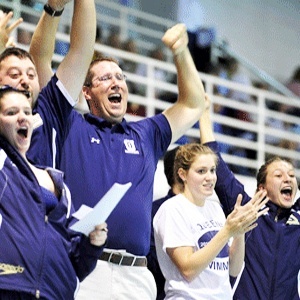 It's February, and you know what that means! It's time for conference championships, and a lot of them. In preparation, we’ve put together a listing of championship meets in the NCAA’s Division II. Archive photo via Queens Athletics

It’s February, and you know what that means! It’s time for conference championships, and a lot of them. In preparation, we’ve put together a listing of championship meets in the NCAA’s Division II. We’ve done our best to track them all down, but as there are many meets going on around the nation this month, if your favorite meet isn’t on this list, let us know and we’ll do our best to track down more information. Keep in mind there are several D2 conference championships that include D3 and NAIA teams, and we’ve done our best to label them accordingly.

Also, be sure to check out the primers for Division 1 and Division 3.

**Conference Carolinas will be participating in the BMC Championships this year**

Guess who’s not on the list who’s going to crush the competition at sun coast conference? Go Emmanuel lions!

I see that Emmauel will be competing at the Sun Coast Conference, but I can’t find any information on the meet other than the date and location. Do you know of any links?

I don’t think there is a website created yet. 🙁 this is the first year in the new conference.

I’ll go ahead and add it to the list and hope that more info comes out in the days leading up to the meet.

Where is Greater Midwest and Mountain East

Its funny how Davis and Elkins is posted in 2 conference Bluegrass Mountain Conference and the Great Midwest. I think whoever wrote this article needs to confirm their facts before posting as I do believe a team cannot compete in 2 conferences at once especially within the same weekend!