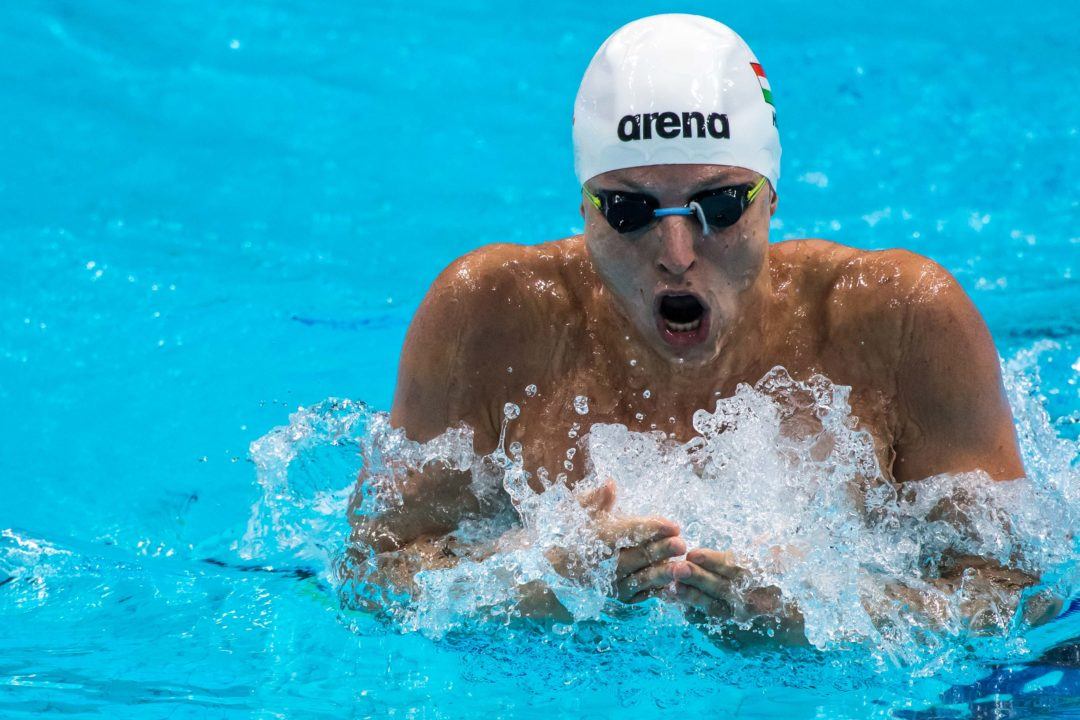 David Verraszto will seek his 5th straight medal and 3rd straight title in the 400 IM at the European Championships. Archive photo via Mike Lewis/Ola Vista Photography

Going off of lifetime best times, there is a clear favorite for gold in both the men’s 200 and 400 IM at the 2018 European Championships.

German Philip Heintz surprised a lot of people when he popped off a 1:55.76 in the 200 IM last June at their National Championships, but couldn’t quite recreate that performance at Worlds, placing 7th in 1:57.43. He has performed on the international stage before, winning the European SC title in 2017, World SC silver in 2016, and also finished 6th at the Rio Olympics. Already a 1:56.67 this year, his fastest ever outside of that one meet last year, he’s got a clear path to gold here.

His biggest challenge will likely come from Great Britain’s Max Litchfield, who swam three consecutive 1:56s last summer to place 4th at the World Championships. However, he is coming off a shoulder injury that forced him out of the Commonwealth Games earlier this year, and therefore is a bit of a wildcard with a season-best of just 1:59.68. His countryman Duncan Scott will also contend for a medal after going a lifetime best 1:57.86 at the Commonwealth Games, and youngster Thomas Dean and former NCAA champ Mark Szaranek will keep both swimmers on their toes in the prelims (with only two per country advancing out of the heats). Dean recently won the European junior title in 1:59.17, and Szaranek has been as fast as 1:58.39 from last year.

Others who will be in the mix to medal include Switzerland’s Jeremy Desplanches, who joined Litchfield and Heintz in the World Championship final last year, defending champion Andreas Vazaios of Greece who is coming off a white-hot NCAA campaign with NC State, and Russian Andrey Zhilkin. Zhilkin was 4th at last summer’s World University Games in the event but knocked two full seconds off his best at the Russian Championships in April down to 1:58.17.

And then there’s Spain’s Hugo Gonzalez, who had an outstanding freshman season with Auburn before flopping at NCAAs. He was the top seed entering the meet in both IM events but ended up placing 10th and 30th overall respectively. However, he did produce a lifetime best in LC a month later in 1:58.03, and with the 400 not on his schedule here, looks to priming for a big performance in the 200.

While the 200 is relatively wide open, Hungarian David Verraszto towers over the field in the men’s 400 IM. He’s now medalled at four consecutive European Championships, winning the last two, and has stepped up big with a pair of silvers at the last two World Championships. He’s been as fast as 4:07.47, is the top European this year at 4:11.98, and shouldn’t’ have a problem winning his third straight title. He’s never been a premier medal threat in the 200, only breaking 1:59 once back in 2011, but the 400 is where he thrives.

Litchfield is the only other swimmer in the field who has been under 4:10, clocking 4:09.62 to take 4th last summer in Budapest, but again is a bit of a question mark coming off that injury. His season-best is 4:16.61, which is only 11th fastest among Europeans, but I think he’s had enough time to properly prepare and should be strong here.

Desplanches will be a factor here as well, going 4:13 both this year and last, and Szaranek should also be in the mix. Richard Nagy of Slovakia, Federico Turrini of Italy and Gergely Gyurta of Hungary had a close battle in placing 2nd, 3rd and 4th two years ago in London, and Olympic finalist Joan Lluis Pons Ramon (ESP) and World Championship finalist Jacob Heidtmann (GER) also come in with an international resume.

A little less experienced, Austrian Patrick Staber and German Johannes Hintze should also be factors having been 4:15 this year.

I fancy Duncan Scott as top Brit in the 200IM. We know his fly/free are good. His back is developing nicely (55s) and his breast split was much improved (34.6) at Commonwealths. Litchfield’s fly/back/free looked as good as ever in Rome, but his breaststroke will clearly need some time to come back, which is to be expected given the nature of his injury.