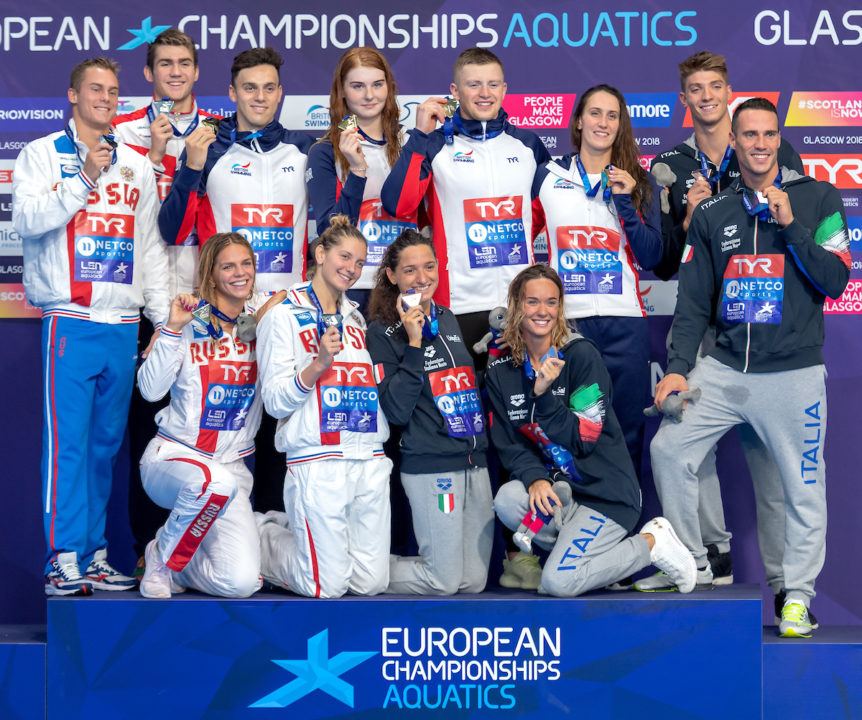 Thanks to 23 gold medals in Glasgow, including 10 earned in pool swimming, Russia has passed Germany for the top of the all-time medals table across disciplines, based on a traditional Gold-Silver-Bronze sort. Current photo via Andrea Staccioli/ Deepbluemedia /Insidefoto

After 23 gold medals in Glasgow this month, 10 of which came from pool swimming, Russia has surpassed Germany to move to the top of the all-time medals rankings in the history of the European Aquatics Championships.

Russia entered the meet 2 golds behind the Germans, which was assured to not be enough due to Russia’s dominance in artistic swimming (or synchronized swimming, as it’s most familiar). Russia, who scored medals in all 5 disciplines contested at the event, led the medals tables this year in 3 of 4 disciplines: they had 10 golds in pool swimming, 5 in diving, and won 8 of 9 events in synchro (Ukraine won the other, in the combination routine).

Germany still has the most total medals with 434-leaving them with still a 75-medal margin over Russia. Russia had a +28 medal margin in 2018, meaning if that pace continues, it should take them through the 2024 event to catch Germany in total medals.

Because the European Championships go back to 1926, there is a period for both modern nations that predates the cold war as well, unlike the World Championships, for example.

The medals table win was Russia’s first since 2010, and 7th overall. That’s the second-most ever, behind only the East Germans who won 8-straight medals tables from 1970 through 1989.

We counted 17 nations that have yet to win a medal at the European Aquatics Championships: Albania, Andorra, Azerbaijan, Bosnia and Herzegovina, Cyprus, Georgia, Gibraltar, Kosovo, Latvia, Liechtenstein, Luxembourg, Macedonia, Malta, Moldova, Monaco, Montenegro, and San Marino. Liechtenstein almost got off the schneid when Julia Hassler finished 5th in the 1500 free.

Armenia did take their first crack at a medal table, via a bronze medal on the 10 meter synchro from Vladimir Harutyunyan and Lev Sargsyan. That puts the country into a tie with Turkey for 40th-place all-time in the medals table. The pair are just 20 and 21-years old, respectively.

You can’t add medals of Soviet Union and Russia together. There were 15 different parts in SU, now independemt countries

Be prepared for them to invade another country next.

If you knew which country , you could prostrate yourself before them to impede their advance by a millisecond perhaps . Wait , they got a whole squadron & more to their Nth Syria formerly disused secretly prepared air base completely unobserved .How is that possible? As within the elections are they super smart or you guys super dumb?

Also, what positions did USSR, East Germany etc place on this table in 1990?

Better swimming through chemistry. In this photo, Morozov and Efimova have been popped for Performance Enhancing Drugs. Watch Icarus!