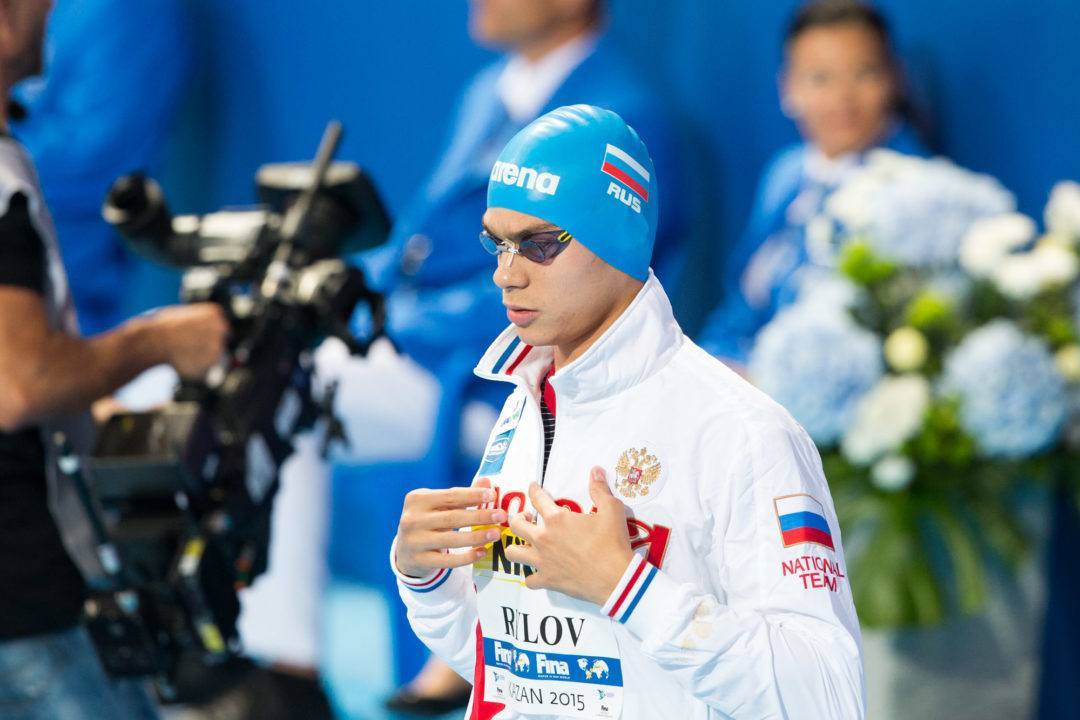 While Murphy and Larkin are 2 of the big names that come to mind in the gold medal conversation, Russia's Evgeny Rylov is definitely in the picture as well. Archive photo via Tim Binning/TheSwimPictures.com

The 5th day of competition at the 2017 FINA World Championships will set the stage for the men’s 200 back. The 2015 World Champion, Australia’s Mitch Larkin (1:56.66), will return to defend his title, but 2016 Olympic Champion Ryan Murphy (1:54.30) of Team USA will also look to remain on top of the international podium. Larkin took a long break after Rio and hasn’t been up to the same speed he was at in 2015 (when he went his personal best 1:53.17) or 2016 yet, but he didn’t have to do too much of a taper to qualify for the meet, so he could make large improvements in Budapest. Murphy was in a similar spot at U.S. Trials, as he didn’t have to worry too much about being fully rested for Trials, especially in this event where he and teammate Jacob Pebley were far ahead of the field. Murphy was within tenths of his personal best 1:53.62, while Pebley (1:54.78) was just a hundredth shy of his personal best, so we could be looking at 2 Americans on the podium if they make marginal improvements from their Trials performances.

While Murphy and Larkin are 2 of the big names that come to mind in the gold medal conversation, Russia’s Evgeny Rylov is definitely in the picture as well. Rylov was the bronze medalist at the Rio Olympics and also took bronze at the 2015 World Championships. He recently put up a personal best 1:53.81 at the 2017 Russian Championships and is the fastest man of 2017 so far. If he can replicate his performance, he could upgrade that 2015 bronze medal to a gold one this summer.

There are 2 more frontrunners for a podium spot in China’s Xu Jiayu (1:54.03) and Japan’s Ryosuke Irie (1:55.86). Jiayu had an explosive performance at the 2017 Chinese Nationals, missing Murphy’s 100 back World Record by just a hundredth and crushing a personal best 1:54.03 in this event. Irie is a longtime international veteran and Olympic medalist in this event. He was off his game in Rio last summer, finishing 8th in the final, but he’s already been faster than he was at that meet with his 1:55.86 this year. Irie’s teammate Kosuke Hagino (1:56.39) has decided to trade in the 200 free for the 200 back this time around, and could give the Japanese 2 in the final if he’s close to his personal best 1:55.43 from 2013. The Chinese may manage to get 2 in as well if Li Guangyuan (1:55.53) can match his personal best form this season’s Chinese Nationals.

Looks to be between Murphy and Rylov. Xu = the X factor. Pebley could contend; Larkin has the capacity to do so but would have to lift immensely from what he has produced so far this year

I actually see Hagino as a bit of an x-factor. PB of 1:54.7, while a few years old, is around what Pebley’s is, and the fact that he dropped 200fr for 200bk says to me that he thinks he could do something good in this event.

It will be a dog fight between Murphy and Rylov, but, Regardless of what goes down I don’t see Murphy improvimg his PB.

No one mentioned the biggest talent of all: Kliment Kolesnikov 1.55 at Russian championships and only 16 yrs old!

No Larkin and no Hagino in the final…