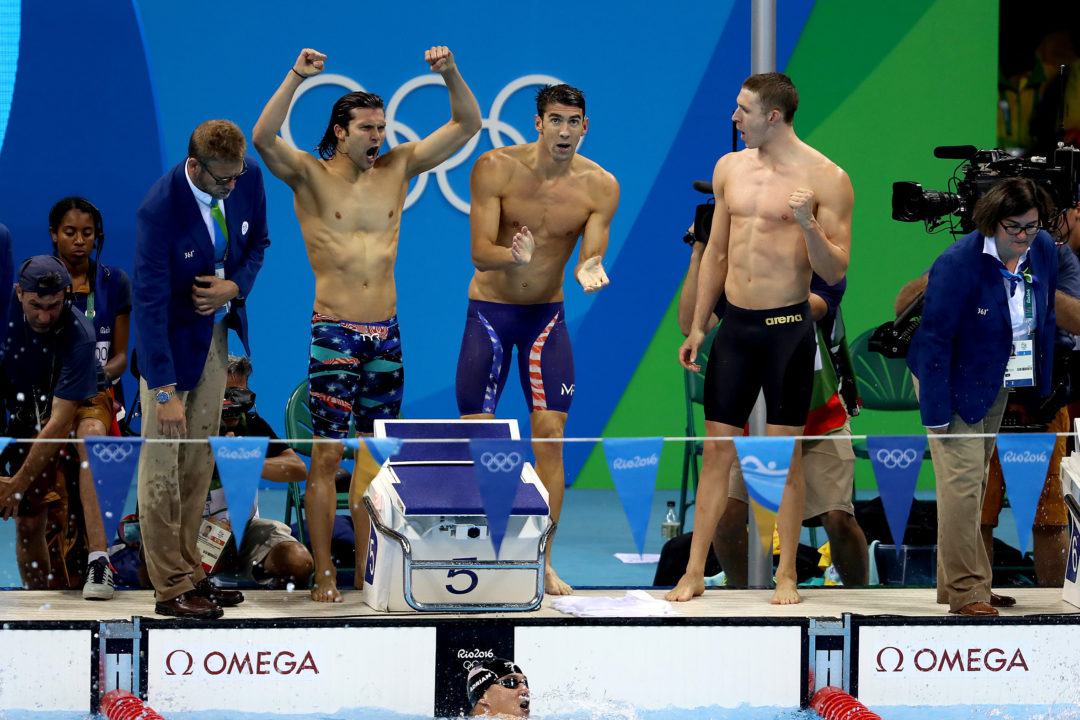 You can find links to all of our event-by-event previews and a compilation of our predicted medal-winners here. 2017 FINA... Current photo via Simone Castrovillari

One of themes heading into this meet has been how shallow the relay entries are across the board,  both in terms of depth at the top and in the overall number of entries.  There plenty of countries entered in the men’s 400 medley relay, there doesn’t appear to be much drama at the top.  For the second straight year, it looks like the USA and Great Britain will be the top two, with perhaps a dogfight behind them for bronze.

On paper, the squads from both the USA and Great Britain should look pretty similar to what we saw in Rio last year, where the Americans swam the fastest time ever in textile (3:27.95).  Michael Phelps is gone, but Ryan Murphy, Cody Miller, and Nathan Adrian are all back.  Matt Grevers and Kevin Cordes actually won their respective 100s at the USA’s trials last month, and both have plenty of relay experience.  Caeleb Dressel blasted a world-leading time in the 100 fly at the same meet, and even tired at the end of a very heavy schedule, he should at worst be within a few-tenths of Phelps’s 50.3 split from last summer.

Adam Peaty is in such of a class of his own currently that Great Britain would be in the medal hunt if their other three legs were merely competent.  James Guy (fly) and Duncan Scott free) are much more than competent, and should be able to stay pretty close to their American counterparts.  Thus, it falls on the shoulders of backstroker Christopher Walker-Hebborn.  If he can go 53-low (although he bowed out of the individual events, reportedly due to sickness), Great Britain should be neck and neck with USA until the final touch.

Australia returns Mitch Larkin and David Morgan on back and fly, and those are two solid legs.  On breaststroke, Daniel Cave is about a second off where Jack Packard was last year.  Cam McEvoy will be need to get closer to his 47.0 from early last year in order to help replace the 46.72 Kyle Chalmers threw down anchoring this relay to a bronze medal.

After getting locked out of a medal at home last year, Brazil will be looking for some redemption in this event.  The entry times for their top swimmers add up to a faster time than the 3:32.84 from last summer’s final, and all four swimmers on that squad return, so they’ll have some experience.  It’d be particuarly helpful if Marcelo Chierighini can anchor under 48; he split 47.72 in the morning in Rio, but only 48.50 in finals.

As great as the American backstrokers are, China could very well be in the lead after the first leg, thanks to Xu Jiayhu, who flirted with the world record earlier this year.  They’ll have some solid legs in the middle, then will be relying on Yu Hexin for the anchor, as Ning Zetao, the 2015 world champion in the 100 free, will not be competing.

Russia is typically right in the mix for this event, and while only two men from last year’s final remain (Evgeny Rylov and Vladimir Morozov), there’s some depth here, and it doesn’t look like they’ll lose too much from the middle two legs.  They should be a lock to make the final, but will need a big swim out of some to realistically challenge for a medal here.

Nicolo Martinenghi‘s been making headlines all year, as the Italian has taken down the junior world record in the 100 breast and throwing down other impressive swims.  Italy also has veteran experience on the anchor leg thanks to Luca Dotto, and Piero Codia is solid on fly, but they’ll really need Matteo Milli to break the 54 barrier in order to be a factor.

Japan is another country we’re used to challenging for medals here, often due to a strong front half.  Ryoksuke Irie and Yashuiro Koseki are seeded 8th and 5th, respectively, in their individual events, so Japan once again should be close to the leaders at the halfway point, but Yuki Kobori will need to be significantly faster than his 51.98 seed time before handing it over to Katsumi Nakamura for Japan to have a shot at a medal.

Don’t think it’ll be as close as this, personally.

Walker-Hebborn really the hinge of this race. I have him about 54.0.

Usa will be the favorite, with Gbr pretty close, but this time China could be a real factor.
Oviously, every leg is important in a relay, but the first one is particular important and if Xu will swim at WR pace, China has the breastroker and flyer to remain in leading position.
The freer (what if Sun will be scratching the 1500 to anchor the medley relay?) is a relative weakness, ok, but the enthusiasm of being in the midst of the fight could give an important boost.

Medals in this one look fairly clear cut – USA, GBR, CHN. Only potential intruder may be RUS.

GBR will push USA hard but unless CWH can deliver something around 53flat rather than 54.0; its likely to be a case of too far with the Peaty weapon being expended on the effort to bring them back to parity rather than taking the race away. Scott can probably attain relative parity with the USA anchor but USA will most likely have extended the margin (however modestly) on fly

We could see insane splits from Dressel and Adrian if it’s close.