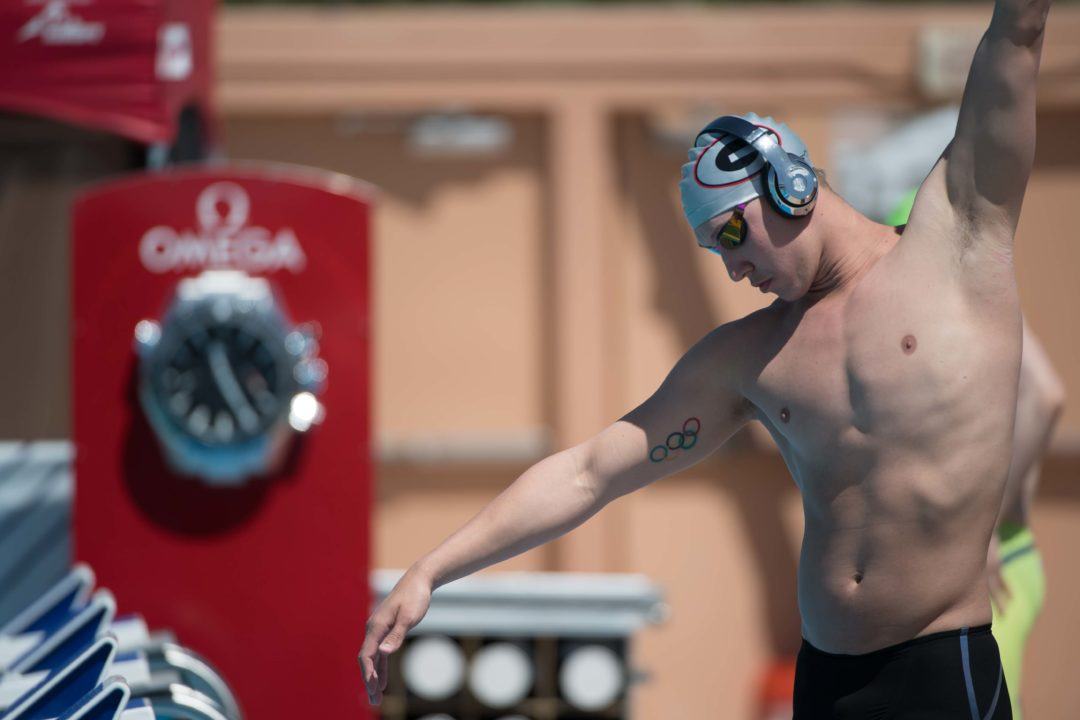 With Phelps and Lochte out of the picture, we'll likely see a pair of fresh faces representing the red, white, and blue in this event. Current photo via Mike Lewis/Ola Vista Photography

The U.S. will likely see a pair of fresh faces representing the red, white, and blue in the men’s 200 IM in Budapest. Olympic champion Michael Phelps is now retired, and Ryan Lochte is barred from competing at Nationals after the infamous gas station incident. Additionally, David Nolan, who placed 3rd at 2016 Trials, is no longer swimming, and World Champs medalist Conor Dwyer is coming off a long break from training after Rio. While this event has been practically locked down by Phelps and Lochte for well over a decade, the door is now wide open for some of the up-and-comers to grab a roster spot.

Georgia’s Chase Kalisz, Cal’s Josh Prenot, and Texas’ Will Licon are among the men who may be inclined to go for it now that Phelps and Lochte are out of the picture. Heading into Trials, Kalisz is the frontrunner after setting a personal best 1:57.21 in season at the 2017 Arena Pro Swim Series in Atlanta. If he’s able to improve on that, he could be far ahead of anyone else.

We could see a 3-way battle for the 2nd spot between Licon, Prenot, and Dwyer. Of the men who will swim the event at Trials, Dwyer is the only man to have broken 1:58 since 2015. However, Licon and Prenot aren’t far behind, as both put up 1:58-lows in 2015 and didn’t swim this race at Trials, so we may not have seen all their cards in the event yet.

Age group phenom Michael Andrew placed 6th in this event in semifinals at Olympic Trials, but then opted out of the final. Andrew has already improved his best time this season. He’ll look to break through the 1:59-barrier after putting up a 1:59.12 at the 2017 Arena Pro Swim Series in Indianapolis. He’s got the speed and versatility after winning a world championships title in the short course 100 IM, but matching the endurance of the Kalisz types in the field will be his biggest challenge.

There are several other returners in this race who were finalists at 2016 Olympic Trials, including Georgia teammates Gunnar Bentz and Jay Litherland along with Pac-12 rivals Abrahm DeVine and Andrew Seliskar. Last summer, Georgia’s Bentz and Litherland finished 4th and 5th in the event respectively. Bentz made huge strides during the NCAA season, and could compete for a spot in this event is he can translate his improvements into the long course pool. Litherland, a 2016 Olympian, is better known for his talent in the 400 IM, but he’s an excellent IMer so he could surprise us in the shorter IM in Indy.

Cal’s Seliskar hit a slump in this event after 2013, but then he came within 2 hundredths of his best time with a 1:59.86 at last summer’s Trials. Like Bentz, he’ll look to move on his momentum after a great NCAA season. Stanford’s DeVine, who finished one place ahead of Seliskar at 2016 Trials, has been a few tenths faster with a lifetime best 1:59-low.

DARKHORSE: Cal’s Matt Josa was DQed in the yards version of those event at NCAAs due to a violation on the breaststroke leg, but would have been fast enough to make it into the final. Should he choose to enter this event and work on his breaststroke leg, Josa could be a factor. As of now, his personal best is a 2:00.94 from 2015 Nationals, but with the speed he showed at NCAAs, we could see a sub-2:00 swim from him.

Kalisz and Prenot for me but I doubt very much we’re gonna see eight men go under 1.59.2. Maybe four or five. Kalisz is USA’s only hopeful for a medal in this event IMO.

This new wave of IMers, all except Litherland probably have backstroke as their weakest stroke. A lot of fly-breaststrokers.

It’s going to be interesting – Lochte won the last 4 world titles, and Phelps won the 3 before that. Maybe this will be Laszlo Cseh’s chance… 🙂

I would argue that freestyle is MA’s weakest stroke. If the IM were just fly-back-breast, he’d probably win at Trials.

A new world without the 4-time olympic champion in that event and without the world record holder.
Kalisz first
Then a 4-guy battle in my opinion between Bentz, Prenot, Andrew and Licon.
If Andrew, Prenot and Licon want to qualify they need a big lead over Bentz before the freestyle leg.
Very hard to predict. Andrew will try to survive and Bentz will try to catch up with the leaders.
Time for Bentz to finally have the big swim I expect from him for so long. I give him one last chance! 🙂

Michael Andrew should be in contention through the breaststroke.

This might be the most competitive and exciting race of the meet.

Huge fan of Michael Andrew, and I am really hoping he can make the team here. 1:57 is attainable for him, and that just might be enough! Lets see what happens.

Also a fan. While Kalisz, Licon, and Prenot have the edge in my mind, Andrew’s got as much of a shot as anyone else.

IMO, if he doesn’t take the fly out in 24.8 and instead focuses on easy speed for that first 50 (he’ll still be right with the front of the pack), he’ll finish much stronger and will have a very solid shot at making the team. Taking the fly out as fast as Phelps and Lochte when they went 1:54’s is a bit ambitious for where he’s at right now… At the moment, he’s a few steps away from being able to do that successfully.

MA will challenge for second. He will just have to go out super fast and hopefully he will hang on for freestyle I can see him have a breakout swim in this event at nationals. 1:57 maybe.

only way MA has a breakout swim of that level is if he changes his freestyle stroke. Since it’s unlikely that he’s done that, it’s unlikely he’s going to be under 1:58.7 in my opinion. The kid needs to fix his underwaters and free if he wants to be at the front of the pack.

5
0
Reply
He Gets It Done Again
Reply to  Blackflag82

I disagree, the issue is not his freestyle technique. He went 22.22 at age 17 in the 50. He can swim free. The problem is that with his sprint focused training a 200m LC race is a little long for him. In any 200m LC event he’d go out fast and fade on the last 50. In the 200 IM that last 50 happens to be freestyle. The question really is, does he have the endurance to hold on? He says he upped his yardage this year. I agree with HSWIMMER. He’s been 1:59.1 this spring, unrested I assume, so a 1:57 isn’t that much of a stretch.

True . For me , Michael has one of the less efficient & horrible freestyle stroke i have ever seen . And at age 18 , with his height , i am sure he can do better and improve so much in that sector . thats just an observation from a fan of swimming . Nothing else

By this logic, every swimmer would be equally good at each of the four 50m events… because it’s “all about power” and technique “doesn’t mean anything”. LOL

Freestyle technique is enormously important in the IMs… swimmers are already taxed significantly from the first three legs and an inefficient freestyle, regardless of how fast they are in a rested 50, is a huge disadvantage.

2
0
Reply
sven
Reply to  He Gets It Done Again

His 50 freestyle technique is good, but there’s a reason the technique that Nathan Adrian uses in the 50 free is not the same technique Phelps and Lochte use on the last 50 of the IM. The shoulder driven technique is incredibly powerful when the body is fresh, but in any kind of extended sprint, a hybrid/lope stroke is almost always the more effective style. I firmly believe that if Michael makes some tweaks to the way he swims freestyle at the end of the IM, or even for the 100 free, he’ll get faster.

1
0
Reply
Swam
Reply to  He Gets It Done Again

The whole idea of USRPT is that you are always tapered, so it’s hard to say you can expect much more

I hesitate to make predictions about those two. Gun to my head, I’d probably flip a coin.

You would flip a coin if there was a gun pointed at your head? That is very odd.

The gunmen that tend to come after me are interesting characters.

All three guys are looking pretty strong, but I’m with you… Prenot looks ahead of Licon and IMO has a shot to beat Kalisz, too. Didn’t he go 1:58 in prelims at one of the Pro series meets this spring? Same meets he’s going 2:10 in the breast… I’ll be surprised if he can’t drop to at least a 1:57 low.