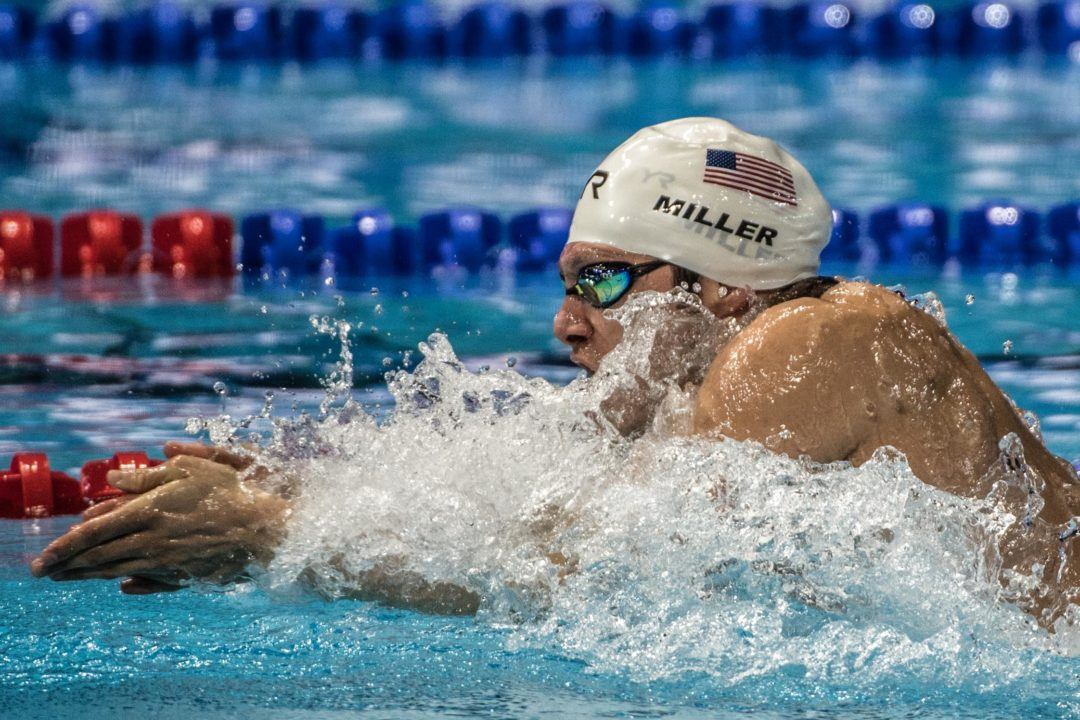 The men's 100 breast field is as stacked as ever, and it looks like it'll be just as tight a squeeze to make the team this summer as it was at last summer's Olympic Trials. Archive photo via Mike Lewis/Ola Vista Photography

The men’s 100 breast field is as stacked as ever, and it looks like it’ll be just as tight a squeeze to make the team this summer as it was at last summer’s Olympic Trials. Rio Olympians Kevin Cordes and Cody Miller both return to battle for a roster spot. Miller, the Olympic bronze medalist, and Cordes have traded the American Record back-and-forth, and have to be considered the frontrunners as the only men in the field to have broken 59 seconds.

There are a handful of men entering with lifetime bests in the 59-mid range. Andrew Wilson is a major threat with a personal best of 59.5 from the 2016 U.S. Open. He smashed NCAA Divison III Records with speed that indicated he could throw down a 59-low in Indianapolis. Josh Prenot, the Olympic silver medalist in the 200 breast, and Nic Fink, who represented the U.S. in this race at 2015 Worlds, are also on the cusp of 59-low. Prenot busted through the 1:00 barrier at Olympic Trials, lowering his time to a 59.6. Fink has been slightly fastest with a 59.5 from the World Cup in 2015, but was shy of that last summer with a 59.8 at Trials.

Another man coming in with a sub-1:00 entry time is age group standout Michael Andrew. After placing 4th in the event at Trials last summer, Andrew will be chasing his own National Age Group Record of 59.82. Fellow age group standout Reece Whitley, who shredded the National High School Record in this event with a 51.84 in the yards pool, could be joining him under the 1:00-barrier from the looks of his improvements during the yards portion of the season.

Will Licon was a finalist in this race at 2016 Olympic Trials, and now looks like even more of a threat after his performances during the NCAA season. Licon was the NCAA champ in all 3 of his individual races, including both breaststrokes. After shifting his focus from the 400 IM to the 100 breast, Licon has developed even more speed in this event. His best is a 1:00.3 from Trials, but it wouldn’t be surprising to see him dip under 1:00.

Also looking good after NCAAs are Connor Hoppe and Carsten Vissering. In the long course pool, Vissering owns a personal best 1:00.86 from 2o15 NCSAs. Hoppe, on the other hand, made a big improvement at 2016 Trials with a 1:00.89. He was close to making finals at 2016 Olympic Trials, but finished 10th in semis. With best times separated by just hundredths, we could see them battling closely for one of the finals spots.

2016 Junior Pan Pac champion Jacob Montague dropped his best time down to a 1:00.6 last summer. Montague has continued to improve during his first year in the NCAA, earning a silver medal in the yards version of this race at the 2017 Big ten Championships. Also in the running is 2017 Big Ten champ Ian Finnerty, who has already been within hundredth of his best this season with a 1:00.77 at the 2017 IU Bucceto Open.

DARKHORSE: Texas A&M’s Jonathan Tybur just missed out on semifinals at Olympic Trials with a 17th place finish. His personal best stands at a 1:01.55 from that meet, and he’s already been within tenths of that with a 1:02.35 in April.

I see Wilson have a big swim this summer. Then Cordes or Miller. I still don’t know. Cordes looks good right now but he can sometimes not handle the pressure very well in the last 25 meters. Miller is at home and is a bronze medalist in Rio. But with Miller….
I pick Wilson and Cordes.
And I’d like to see Whitley under the minute.

Who is Andrew Wilson?

Miller 58 high, hopefully with a DQ

Hopefully? This is someone who represented the country and earned bronze at the Olympics. You guys should show him a little decency and respect.

You do realize there is clear evidence he cheated and is a cheater? What respect?

I see the winner going 58.5 Fast pool/prelims-finals only. That leads to breakout times in stacked events in non-Olympic years.

Can’t get excited about this. Breastroke is the equivalent of race walking in track & field. Slower form of moving from point A to point B and results often depend on who does or doesn’t get DQ’d.

Probably one of the most ignorant comments I’ve seen on SwimSwam but I guess that’s why there is a comment section.

This guy is probably still frustrated at how he couldn’t do a legal kick back in his age group swimming days.

Haha true. If there were an equivalent race in track it would be a crab walk

I’d compare it more to hurdles. Not as fast and often depends on who doesn’t hit the hurdles. Which I would say ADDS to the excitement rather than being a detractor. How fast can they go despite the inherent disadvantage of the event? Who has the finesse to succeed when the mechanics of the stroke are not conducive maximizing propulsion while minimizing drag? Fast breaststroke is the closest thing to art that the sport of swimming offers, in my opinion.

Personally, being one of those swimmers who can do everything fairly well EXCEPT breaststroke, I’ve always had a soft spot for watching fast breaststroke because I am in complete awe of how they move through the water so well. And… Read more »

I’m a breastroker, and the amount of spectators and parents who have approached me to say they love watching me swim the stroke is absurd. It is one of the more graceful and dynamic stroke of the strokes. Even if the 100 BR doesn’t excite you, I’m sure the 4×100 medley relay does – how these swimmers perform at trials will have a major impact on the relay lineup.

Cordes and Wilson. I am very baised agaimst Miller, because the guy has an technique that is clearly against the rules, and has been Dqed for it before, yet refuses to change it and seems to actually embrace it. Also Whitley will be under a minute

Same choices for me too .