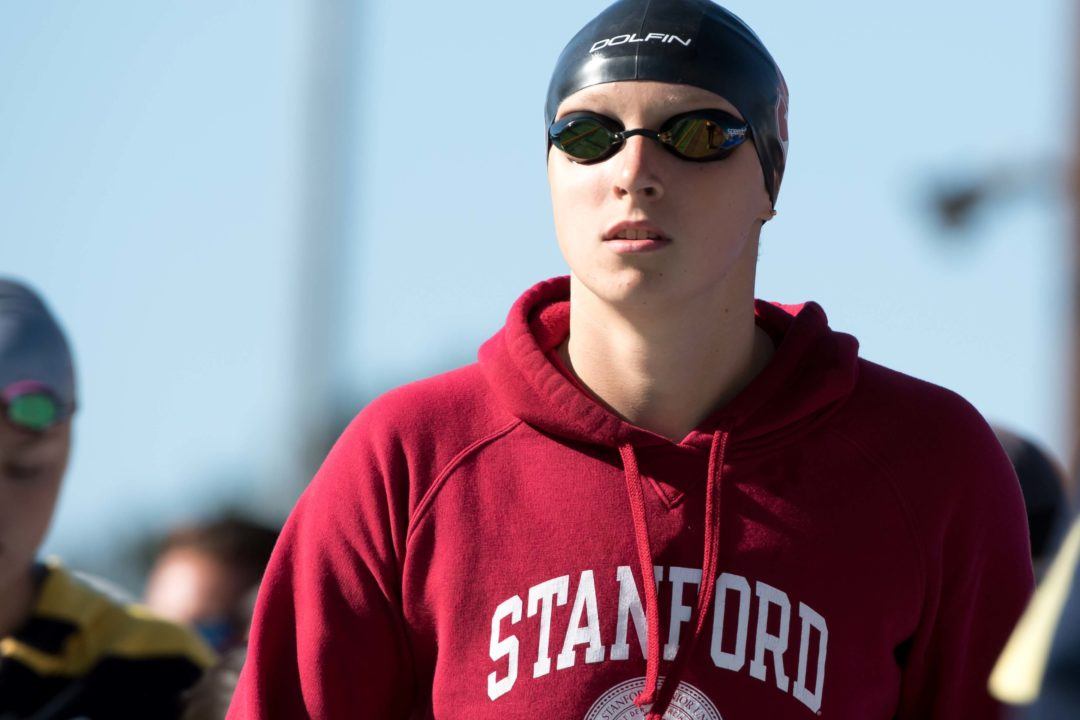 The award for NCAA female swimmer of the year was a tough one to call with several swimmers breaking records and winning multiple events. Archive photo via Mike Lewis/Ola Vista Photography

TO SEE ALL OF OUR 2017 SWAMMY AWARDS PRESENTED BY TYR, CLICK HERE.

The award for NCAA female swimmer of the year was a tough one to call with several swimmers breaking records and winning multiple events, but when it came down to it, the award went to Katie Ledecky. In her first season in the NCAA, Stanford’s Ledecky won all 3 of her individual events at the 2017 NCAA Championships. Ledecky swept the distance freestyles and tied Louisville’s Mallory Comerford for the gold in the 200 free. She also played a role in Stanford’s American and NCAA Record-setting 400 free relay and 800 free relay.

Ledecky was also a 2-time champion at her first Pac-12 championships. She scorched an American Record in the 500 free at that meet, throwing down a blistering 4:25.15 to win it. That took down her own former records by over a second. She surprised some people when she opted not to swim the 1650 free there, instead going after the 400 IM. She took down the American Record in that event, beating out reigning NCAA champ and teammate Ella Eastin in 3:57.68, though that mark was later broken again by Eastin at NCAAs. Ledecky doubled up that night with the 200 free immediately after the 400 IM, coming up just short of the title to teammate Simone Manuel.

Ledecky also had some record-breaking swims outside of her championship meets. Before breaking the American Record in the 500 free at Pac-12s, she had set it at the Ohio State Invitational. At that meet, she also smashed the 1650 free American Record by 10 seconds and the NCAA Record by 20 seconds in 15:03.92 (she has since broken this record). Additionally, Ledecky took down the 1000 free NCAA Record by 10 seconds just 2 months into her collegiate career when she posted a 9:10.49. She was faster than that in her American Record mile swim, though, lowering it to a 9:08.94 on the split.

Ledecky 3 wins with one of them being a tie and 2 relay wins…. Ledecky wins the award

Licon 3 wins with one of them being a tie and 2 relay wins… and Dressel gets the award with no relay wins?

Perhaps they valued dressels 2 ncaa and American records over Licons relay wins. Not saying the relay wins count for nothing but if dressel had been at texas he would’ve had some too. If Kathleen baker, the only one you could realistically argue for over ledecky had set 2 NCAA records like dressel there is a fair shot she would have won the award. Gotta look at the context.

An edit to my comment: I know licon set a record as well but 2 records>1 record dressel performed better individually.

Dressel probably deserves it, I just think it is way closer than people are making it out to be. I think there might be an excitement bias since sprints free fly is way more exciting than breastroke and IM. But yeah I’m probably wrong.

I think the gap between Ledecky and Baker in this award is even closer.

SCCoach- keep in mind that records played a role here also, not just finishes. And the entire season is taken into account (though NCAAs is certainly the most heavily weighed). Ledecky and Dressel set the most individual American records throughout the season and won all of their events (a tie for 1st is still 1st, and there’s no scoring taken into account in this instance so no reason to count it otherwise). Relays are great and contributions are noted, but those wins aren’t evaluated as heavily as individual performances here because that has a lot to do with the depth of the teams too. This award is for an individual.

And Licon and Dressel had very similar performances at WC’s… oh that’s right, Licon didn’t even make the world’s team and he didn’t swim some of the fastest races of all time in LCM. That’s probably why Dressel won

UH, the award is “NCAA” Male Swimmer of the Year. As such, World Championships results & long course meter times have absolutely no barring on the outcome.

An amazing athlete and person.