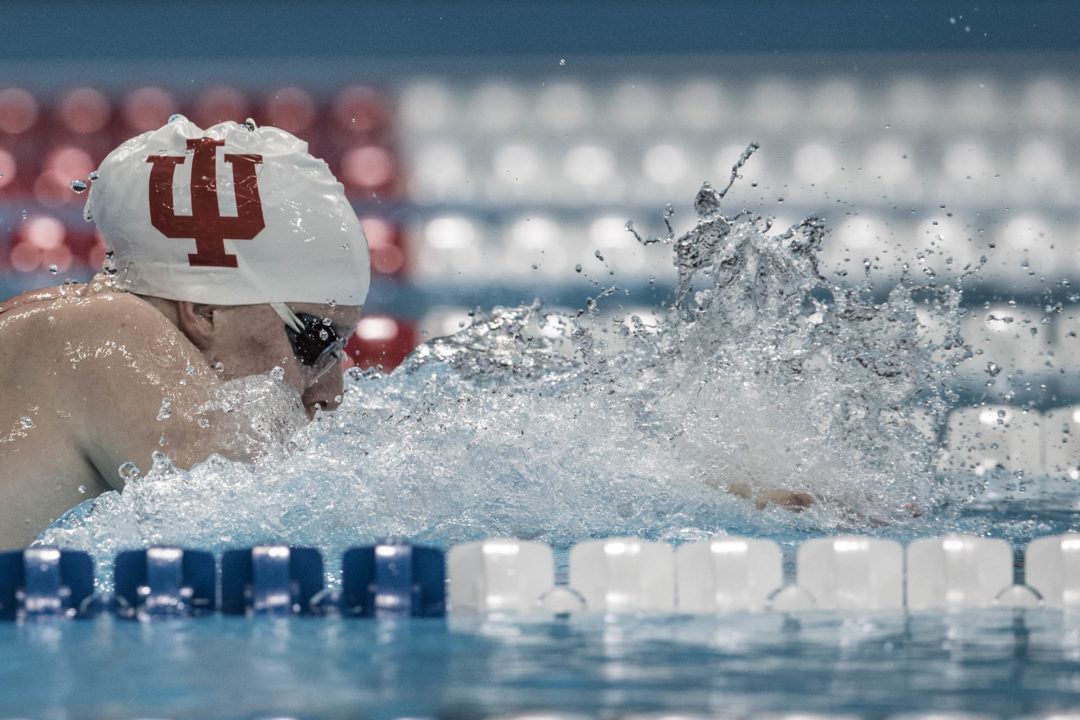 The Big Ten Women's Championships continue to bring the heat on a busy weekend in college swimming, with Lilly King breaking the first American record of the 2017 collegiate postseason. King went 56.30 to cut a half-second off her own American and NCAA 100 breast records. Archive photo via Mike Lewis/Ola Vista Photography

The Big Ten Women’s Championships continue to bring the heat on a busy weekend in college swimming, with Lilly King breaking the first American record of the 2017 collegiate postseason. King went 56.30 to cut a half-second off her own American and NCAA 100 breast records.

The Indiana sophomore won the event by 2.6 seconds over a field full of top-shelf breaststrokers. In fact, second and third place in the Big Ten race (Minnesota’s Lindsey Horejsi and Kierra Smith) would rank #6 and #7 in the NCAA rankings, depending, of course, on swims at other conference meets around the country tonight. King currently leads the NCAA ranks by more than two seconds.

Last season, King became the first swimmer ever under 57 seconds, and now she threatens to become the first ever under 56. Here’s a look at her splits tonight compared to her splits at the NCAA Championships last year when she set the record:

King came back in under 30 seconds, the first time on record we can find a female swimmer coming back that fast in a 100 breaststroke. That also bodes well for King’s 200 breast, which takes place tomorrow.

Bear in mind, too, that King was 57.35 at Big Tens last year before dropping another half-second at NCAAs. If she can accomplish a similar feat in her sophomore season, King will challenge a 55-second 100 breaststroke swim.

I have a video on my youtube channel, not the best quality but better than no video.
https://www.youtube.com/watch?v=detj7P87pyw

Is there a video

Breaststroke has changed the most in terms of being faster than any stroke since the 1970’s. The changes of allowing you to got below the hairline with your head and the one dolphin kick in the start and turns has made it about 9 seconds faster than 1976 while fly is only about 6 seconds faster. King does a 56 and in 1976 the American record was only 1:05 while fly is at 49 now for women and it was 55 in 1976.

I agree, and the changes made the breaststroke more explosive and interesting.

I can’t still believe it. Now it’s clear she was much less rested at SCM world championships last December which explains her defeat.
That’s an astonishing performance. I never expected that in the post-olympic season.
Congrats to Lilly King. She must have the goal to break the LCM world record now.