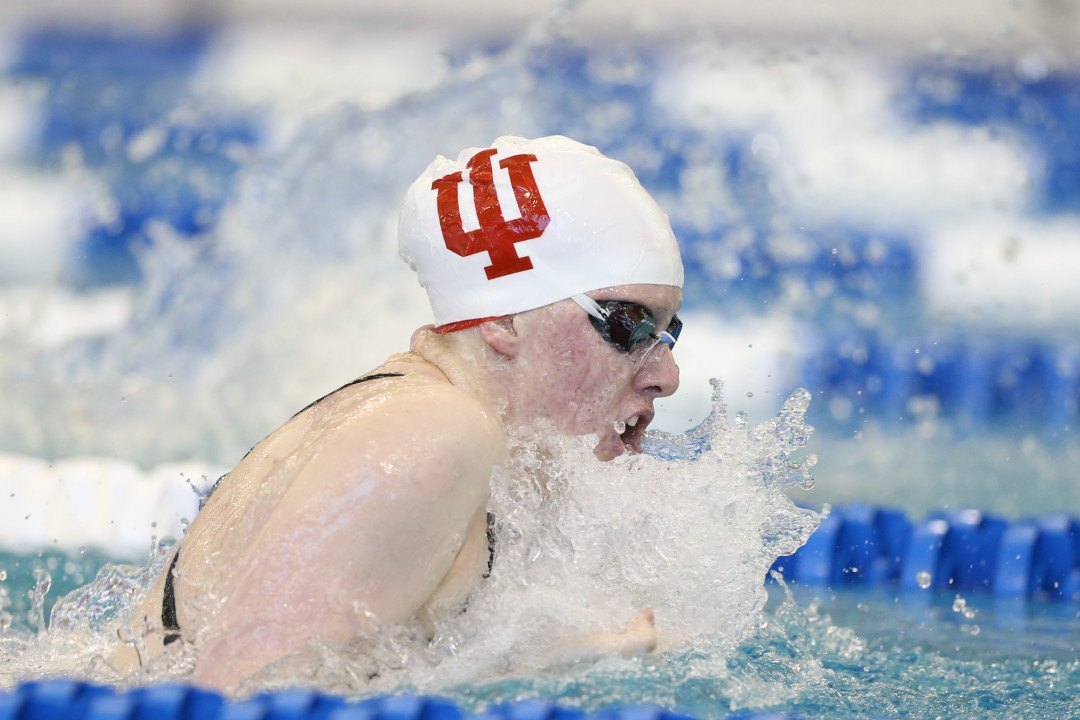 Indiana sophomore Lilly King has been named the 2017 Big Ten Swimmer of the Championships after winning all three of her individual events, plus the 400 medley relay, in addition to swimming the fastest 100 yard breaststroke ever. Archive photo via Tim Binning/TheSwimPictures.com

King opened up her week with the fastest-ever medley relay split in a 50 breaststroke, and followed that with a two-second improvement to win the 200 IM in 1:55.90 – a race where she was almost 2 seconds better than her competition on the breaststroke.

With that 200 IM swim, she now becomes a three-event A-finalist threat at NCAAs, after scratching the opening 200 IM at last year’s NCAA Championship meet.

Next, King swam a ‘casual’ 56.53 on the 400 medley relay that was two-tenths faster than she swam at NCAAs last year, foreshadowing what was to come next.

On Friday, King unloaded by taking half-a-second off of her Big Ten, NCAA, and U.S. Open Records in the 100 breaststroke with a 56.30. The fastest time that anybody had ever been previously (her NCAA-winning time from last year) was 56.85, and the fastest that anybody not named Lilly King has ever been is a 57.23 from Breeja Larson in 2014. That’s almost a second clearance over everybody in history over just 100 yards.

On Saturday evening, in the final session of the meet, the Olympic champ had one more big show-down, which was the most anticipated mano a mano showdown of the entire meet. The 2016 NCAA Champion in the 200 breaststroke King would have to fight off the 2015 NCAA Champion in the 200 breaststroke Kierra Smith, and the battle was everything it was hyped up to be. King opened up over a huge early lead – going up over a second in the first 50, and extending it by another half on the second.

But Smith, whose specialty is this 200 breaststroke, fought back coming home. She took half-a-second back on the third 50, and another 8-tenths in the last lap, but King wound up holding her off 2:04.03-2:04.37. The optics of the battle, with the two sitting four seconds clear of the field by the time they finished, was phenomenal. The result was the 2nd-fastest and 5th-fastest performances in history.

King was the obvious choice as the only swimmer to win all 3 of her individual events at the meet. The Diver of the Meet was equally as clear, as Minnesota’s Yu Zhou won both springboard events and was 3rd on the platform for Minnesota, who took 4th as a team in spite of being without All-American Brooke Zeiger, who scored 74 points at last year’s Big Ten Championships.

Minnesota also picked up a Freshman of the Year honor, with Tevyn Waddell being named as the winner after finishing 1st in the 100 back in 52.09. She was the only freshman to win an individual event at the meet.

While the second place Hoosiers and 4th-place Gophers picked up all of the individual honors, it was the Michigan Wolverines who defended their title and got the B1G team trophy. They did it with depth and by top-end talent, including a double event win from G Ryan in the 500 and 1650, with huge improvements of 4 and 14 seconds, respectively, from her best times last year.

At the bottom end of the conference, there were a few teams who well out-performed expectations. The Rutgers women, specifically, moved up a spot (and 59 points) from their 2016 finish at this meet, in spite of graduating their best swimmer Joanna Wu.

Congrats to Rutgers on the significant improvement! They are a team on the rise!

It’s kind of crazy that between King and Peaty we now have 2 athletes who have been about a full second faster than anyone else ever in the 100 of their best discipline (yards for King and meters for Peaty).

If Lilly King swam for NCST, we would have a video by now.

Tom Dolan was liked that too but maybe they both have a lot of confidence which helps them be great swommers.

Disagree! She stood up for clean athletics. That is the ultimate in sportsmanship. Plus she backed it up because she’s a beast.

totally right – she has serious guts when it comes to standing for what feels right + amazing performances to back that up naturally .

She definitely displayed a bit of unsophisticated, non-critical thinking, “Ugly American” at the Olympics. The issue of doping is very complex, not black and white, thus the range of penalties. But she’s young, so plenty of time to mature.

The issue of doping is very complex???!!!!????? There is no black or white???!!!!!???? That is the biggest load of baloney I have read on this site in a very long time. Doping is NOT a complex issue. It IS black and white. Don’t believe me? Pull up a chair and let’s have a nice little chat with Shirley Babashoff, Nancy Garapick, Enith Brigitha, Cheryl Gibson, Jenny Thompson, Mary T. Meagher, Jackie Willmott, Sharon Davies, and on and on and on. You tell them that this is a complicated, non-black and white issue and then step back for the explosion.

Lol. Doping is always black and white with Americans…until we bring up Rick Demont. He was screwed, right?

The doping violation against Rick Demont was an identical scenario to the one against Etienne Medeiros, yet the Americans want to asterisk Medeiros’ name, and throw a parade for Demont.

Whether it’s right or not – whether or not Demont is more worthy than Medeiros – at least I hope that opens your eyes to the gray areas.

Not even close to being analogous. And, yes Rick was completely screwed.

You literally can’t. Even if you believe there’s a difference, which is fine if that’s what makes you happy, you’re still acknowledging a shade of gray. Which was the original poster’s point.

So Americans only see black and white? See through this See-through…..Nancy Garapick is Canadian. Cheryl Gibson is CANADIAN. Jackie Willmott is BRITISH. Sharon Davies is BRITISH. Edith Brigitta is DUTCH. Want more who weren’t just Americans? Kristian Egerszegi is HUNGARIAN. Lubov Rusonova was from the SOVIET UNION. Catherine Plewinski is FRENCH. This isn’t something you can sweep away as being American arrogance. This affected swimmers from ALL countries who were cheated out of gold medals because of doping. This is not a grey area. This isn’t argued as a complicated issue so that we can turn the other way and feel sorry for the cheater. Cheating is cheating and when a clean athlete is robbed of a much deserved medal,… Read more »

You referenced a group of swimmers from one particular time period when the East German sponsored doping program was egregious and game changing. Not all cases are that black and white.

1. What is your position on an Olympic athlete (Efimova) who goes to GNC and asks for a legal supplement to help her get a little more energy during the day, is given a supplement that has DHEA, for reasons either due to language barrier or naivety doesn’t properly check the ingredients and tests positive. The caveat is that there are several studies (including a National Institute of Health study) that indicate DHEA provides no performance enhancement. Should she get a warning, 3 month ban, 2 year ban,… Read more »

Please help me understand. You cite an example where an American lost an Olympic gold medal and a Brazilian woman was allowed to compete in the Olympics after both did something very similar. You then use this example to complain about a pro-American bias.

Of course doping is a complicated issue. The prohibited list changes every year, some substances are added, some are removed, some sentences are increased, some are decreased, new medicines are introduced every year that may have had an initial clinical intent yet have (or are perceived to have) a performance enhancing effect, biochemist and physiologists debate every year about what is/isn’t performance enhancing, legal supplements are routinely found to be tainted, livestock juiced with certain substances can cause positives in athletes consuming contaminated meat, the CAS rarely votes unanimously (kinda like our Supreme Court), athletes from poorer countries can’t afford expensive lawyers (like Montsho) and thus don’t have similar legal representation as athletes from the Western world, some substances which… Read more »

Hey, what are you, the spin doctor? Maybe you should join the DJT crew and team up with KellyAnne Conway or this guy below?

Facts are facts. Doping is cheating. The truth does not care what you believe.

I was in Thailand during the Olympics & Lily ( compared to the classy Japanese winner of the 200) did come off as an ugly . They know that western athletes come to Thailand to train & source performance enhancements all the time .. So it was seen as hypocritical & plain aggro.

As things have progressed ( regressed?) Russia didn’t need to worry .They could have just hacked the result .What is a scoreboard compared to the whole US election & now the French election & the German election & of course Brexit . They didn’t think it would be that easy .

Respect Lilly for being honest and forthright. She is brave for being honest. This moves the sport forward. Do not denigrate a female swimmer for being strong, confident, and secure. Go Lilly. Do not damage her while supporting politically correct swimmers who look out for their wallets and reputations only.

Do you think she understands the difference between DHEA and stanozolol? Between meldonium and EPO? Between HCZT and Furosemide? Opening her mouth and blurting out obtuse, unsophisticated rhetoric does not make her a beacon of virtue or wisdom, and certainly doesn’t move the sport forward.

7
-4
Reply
Know It All
Reply to  Muppet Beaker

4
0
Reply
Young Earther
Reply to  Know It All

Very convincing argument. I bet your also talented at shouting “the earth was created in six, 24 hours days”, or “the earth is 5000 years old”. As you said in your statement above, no need to know… who needs to know what an allegory or parable or metaphor is… who needs to know what foreshadowing or imagery or is… who needs to know what hyperbole is. If it says it in the good book, by gosh it must be so. Sophisticated critical thinking like yours must make life very black and white. I’m guessing most collegiate and Olympic athletes are glad you’re not helping USADA or WADA craft policy or adjudicate cases. No medals for you Carl Lewis, you took… Read more »

what does being a female have to do with it?

Minnesota was 4th not 3rd

it will come un due time ….i guess

Check out this YouTube link – 100 breast Lily King. There is no sound, but still we can see it.