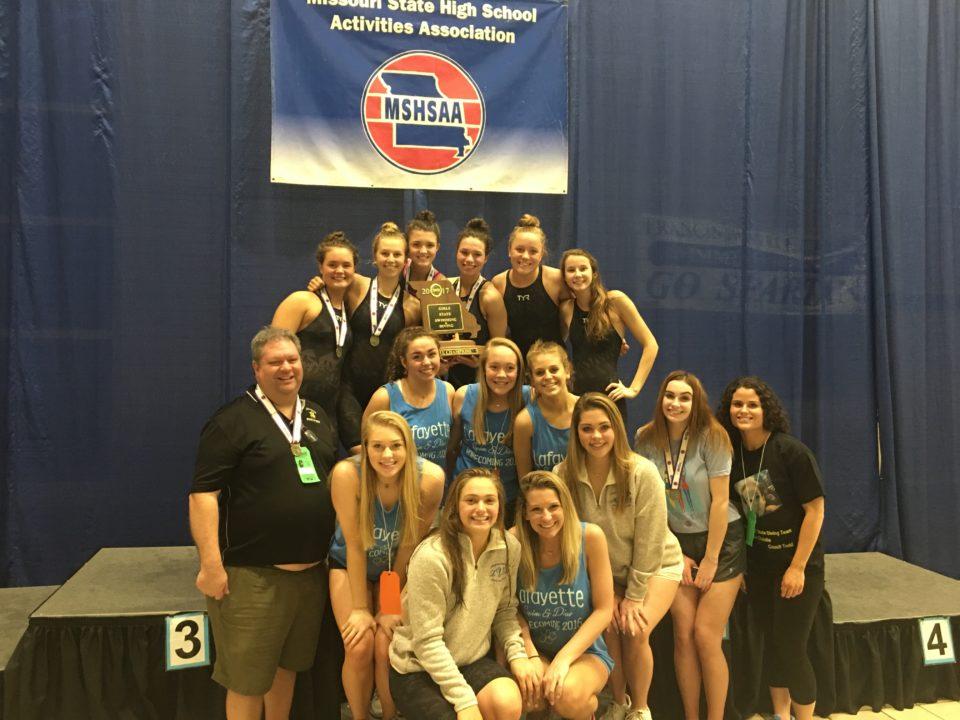 Two MSHSAA Records were rewritten and Lafayette prevailed at the 2017 MSHSAA Championship where the team battle came down to the last relay. Current photo via Shawn Klosterman

2017 represents a landmark in the history of MSHSAA Girls Swimming as it is the final year that the girls Championship meet will be contested all together in one class. The recent decision to split into two classes, with the top 48 schools being assigned to class 2, will mean that after this year there will be two State Champions in the books, and also that there will be two sets of MSHSAA Records starting with the 2017-18 season.

The uncertainty of this unknown path brings with it an underlying worry that somehow achievements could become diminished after the split. Some coaches and fans already claim to lament the decision, while others are excited for the potential for growth that the split may bring.  No matter how one feels about the upcoming change, the thought of it has created a feeling on deck that forces historical records to carry with them a new reverence and makes honors achieved at this meet carry more weight as to their importance in relation to the legacy of MSHSAA Swimming & Diving.

Among those accolades in the 2017 MSHSAA Championship were two State Records. The first was a thirteen year old Medley Relay mark hacked by over a second, and the second, an eight year old standard broken twice by two different girls, the two best 50 freestyle aces that Missouri high schools have ever seen.

The team battle appropriately came down to the last event, with Todd Gabel’s Lafayette squad taking the final relay win to become MSHSAA Champions by just 3.5 points. This was the Lancers’ 11th title in the 42 year history of MSHSAA girls swimming, and the second under Gabel’s tenure. This was also the second time under his watch that the title was decided in the exact same fashion, matching a 3.5 point fight to the finish win over Springfield Glendale in 2010.

The Rockbridge squad of Ellie Zweifel, Nicole Williams, Ellie Flanagan and Bettie Logan were not able to match their spectacular 1:43.99 MSHSAA Record swim from prelims, but still easily handled the rest of the field, winning the event by over two and a half seconds.

Marquette’s Alyssa Lemon went into the final of the 200 freestyle as the second seed out of prelims, but had what was by far the largest time drop to take the MSHSAA title by over a second. The incredibly tight heat saw six girls at 1:52 in the prelim, leaving fans thinking it could be anyone’s race, and with Lemon getting her feet to the wall fourth at the 100, her impressive back half was an added treat for spectators.

Krystal Caylor would not have been picked as the favorite to win the 200 IM by anyone other than possibly herself and Chiefs Head Coach Pete Hill. The Kickapoo senior with the unending positive attitude cut over five seconds from her lifetime best to put herself in position to win this event, holding back an incredibly strong and experienced field.

When Amber Green lowered the MSHSAA 50 Freestyle Record to 23.24 in 2009, it was during the era of full body rubberized suits, and any in attendance that day would have noticed that she was not wearing one. Her suit in ’09 was one of the few competed in that year that would have been legal by today’s standards. Some of us purists might have felt a little sting if that record had been beat in one of those suits. Now those non-permeable materials are gone, but today’s tech suits might still be better than what Green wore that year. I don’t say that to diminish any of the accomplishments of today’s athletes– I say because this author is glad that when this record went down, it went down in a way that left no doubt. Molly Moore had sliced .02 from the mark in the prelims, but in the finals she crushed her own PR again, taking it down another .15. Amazingly, that swim was not enough, as Anna Miller would not be outdone and blocked Moore from both re-setting the record and from defending her title in the event. Miller cut an incredible .48 from her preliminary swim to touch at 22.89, making her the first girl in MSHSAA history to dip below the 23 second barrier.

Missouri State commit Ashley Yarbrough successfully defended her MSHSAA title on the one meter springboard. Elle Christe was also among the top three in the 2016 Championship, this year moving up one place for Runner Up and scoring valuable points for the Lancers.

Cor Jesuit’s Karisa Franz took complete ownership of the 100 fly, taking a slight lead at the touch of the first 50 and then leaving the rest of the field behind. Her split of 28.64 coming home was over a second faster than any other competitor. Emily O’Connell got out with Franz below 26 seconds for the first split, which helped her to cut .93 from her prelim time to move up from fourth seed, touching at 56.09 for second place.

The second showdown between Miller and Moore did not disappoint. The two sprint stars were out with identical splits at the 50, touching at 24.59 to the feet. Miller, the Senior, was able to bring the race home in 25.77 versus Moore’s 26.50 to take the win. Miller’s double sprint title would earn her Athlete of the Year honors for 2017. Ellie Wehrman’s finish is also notable as she was the 6th place seed out of prelims, and dropped .61 overall from her original seed to move up to third place. It was Wehrman’s second 50 that made the difference for her as well, as she was fifth at the halfway point of the race.

Boise State commit Brittany Wen completed her title defense in the 500 Freestyle with expert pacing, managing to hold steady throughout until she could finally seal her win on race ending splits that set her apart. Wen had been beat in this event both at the COMO Invite and the during Friday’s prelim session, but the veteran Senior kept her cool, knowing she could get the job done at the meet that mattered most. Wen cut 2.85 from her preliminary swim, and was joined on the podium by teammate Beahan who cut 5.37 to move her way up from 6th to 3rd, scoring big points for the Kewpies.

Delaney Thomas (23.89,) Katie Haefner (24.99,) Cate Behl (24.41,) and Claire Vanbiljon (23.77) moved up from third seed out of prelims to bring a MSHSAA title defense for Lafayette, and major points toward their team title. They were the only team in the field boasting two sub-24 splits. Francis Howell cut 1.49 from their preliminary swim to move into the Runner Up position from the fourth seed out of prelims. Marquette, the top seed into finals, improved by .25 but was still forced to settle for third.

Parkway Central’s Madison Brown finished sixth place at the 2016 MSHSAA meet, and was originally the fifth seed coming into the preliminaries this year. She was able to cut two full seconds from her personal best to establish herself as a threat by taking the number one seed into finals. The Senior was able to drop another .48 in finals, making her the only competitor below the 56 second barrier and claiming the title for the Colts.

The Rockbridge duo of Williams and Zweifel managed to repeat their 1-2 sweep of the breaststroke for the Bruins, earning the points that put them back into position for a possible team title and forcing Lafayette to sweat the outcome as they headed into the final event of the evening.

Columbia Rockbridge had moved up from 8th seed to 6th after the dust settled on the preliminary round of the 400 Free Relay on Friday. The Bruins fought hard, moving up another spot in finals to take fifth, dropping an incredible 6.99 seconds from their original seed time along the way, but it was not enough. The Lafayette team of Petrosino (51.70,) Behl (53.32,) Thomas (51.79,) and Claire Vanbiljon (53.17) took the clear win with over three seconds between them and any other team in the final heat, touching at 3:29.98 to secure the 11th MSHSAA title in program history.