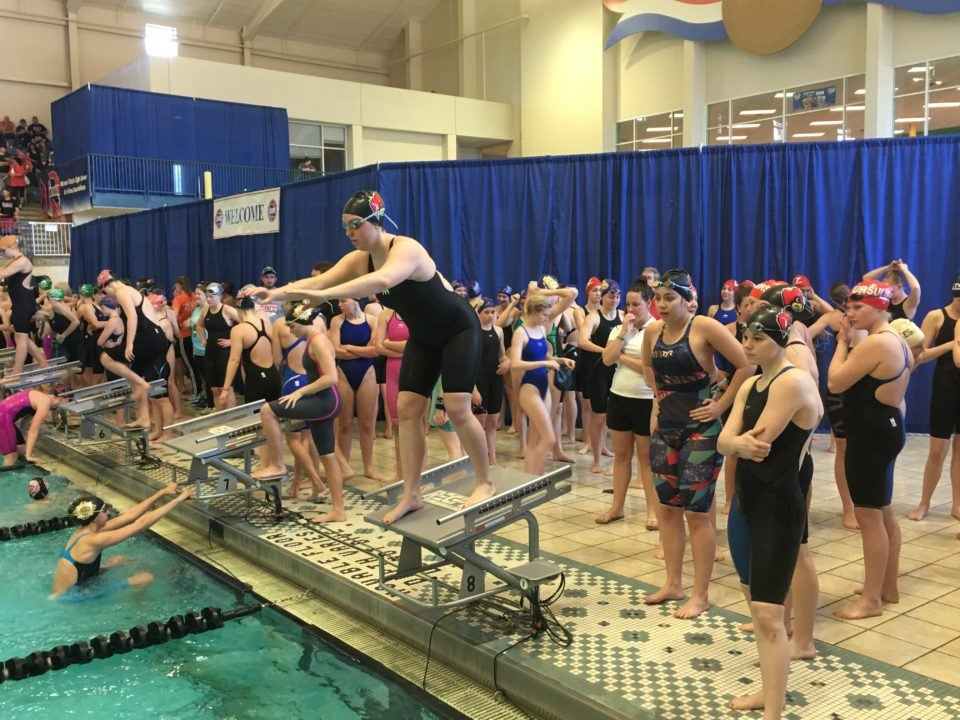 Missouri High School Records in the 200 Medley Relay and the 50 Freestyle were broken at the 2017 MSHSAA Prelim in St Peters. Current photo via Shawn Klosterman

As you can imagine, the atmosphere for the rest of the session was electric, and set swim fans up for an even more exciting final on Saturday.  For example, in the very next event the final will be led by six athletes all seeded between 1:52.00 and 1:52.81, led by Lafayette’s Franceska Petrosino with Marquette’s Alyssa Lemon right near her with 1:52.06.

The 200 IM saw four athletes improve to times below 2:06, with Kickapoo’s Krystal Caylor having dropped 5.83 seconds from her seed time to take the top lane assignment for finals at 2:04.41.

The 50 free final will feature eight swimmers at 24.2 or better, led by Defending MSHSAA Champion Molly Moore from Summit Prep New Christian Academy who lowered the MSHSAA Record with 23.22.  Moore’s time erased the 23.24 mark set by Eureka’s Amber Green in 2009.  She will be challenged by Anna Miller from St Joseph’s Academy at 23.37.  Miller is the top seed in the 100 free ahead of Moore, as they touched in 51.26 and 51.49 respectively.  In that event they are joined below 52 seconds by the Lafayette pair of Delaney Thomas at 51.85 and Claire Vanbiljon at 51.93.

Other events to watch in Saturday’s final:

Diving will be contested Saturday at 9am, and Swimming Finals will begin at 3pm at the St Peters Rec-Plex.