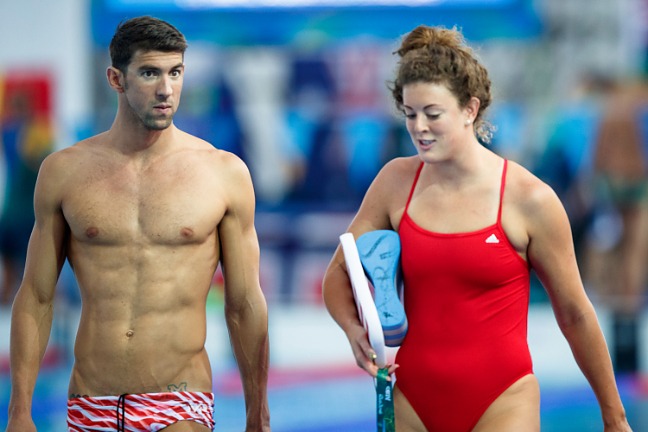 “Being involved in Awareness Day and with SAMHSA gives us the chance to emphasize that paying attention to mental health is another important component of growing up healthy," says Michael Phelps of his and Allison Schmitt's involvement in a special event. Archive photo via courtesy of Rio2016.com

Olympians and longtime training partners Michael Phelps and Allison Schmitt have been selected to serve as Honorary Chairpersons of the Substance Abuse and Mental Health Services Administration’s (SAMHSA) Health Awareness Day national event. The official event is set to take place on Thursday, May 4th at The George Washington University School of Media and Public Affairs Jack Morton Auditorium, with the goal of focusing attention on the needs of children, youth and young adults who experience behavioral health disorders, such as mental illnesses and addictions.

Both Phelps and Schmitt will receive SAMHSA’s Special Recognition Award for having spoken openly about their own behavioral challenges experienced in their lives. For 23-time Olympic gold medalist Phelps, the Baltimore native notched two DUIs over his career. He has described the period after his 2nd DUI as especially dark. “I was in the lowest place I’ve ever been. Honestly, at one point I felt like I didn’t want to see another day. Felt like it should be over,” he said. Phelps subsequently spent time in a treatment center in 2014, after which, the 31-year-old emerged healthy, driven and ultimately back to form, as he clinched his 28th Olympic medal in Rio last summer.

Schmitt, who trained with Phelps both in Baltimore and then in Tempe, Arizona under Bob Bowman, in 2015 spoke candidly about her post-London depression. Even having won Olympic gold at the 2012 Games, Schmitt didn’t feel like herself and suffered from lack of confidence. She encouraged others to seek help and recognize that ‘it’s ok to not be ok.’

“Allison and I are excited to be a part of this national effort. As we travel all over the country, we’re often asked about our training, diets, and routines for staying fit,” said Michael Phelps. “Being involved in Awareness Day and with SAMHSA gives us the chance to emphasize that paying attention to mental health is another important component of growing up healthy.”

Maybe include Ryan Lochte, so he and Michael could give a seminar on healthy human sexuality. Ryan and Michael were the two most visible swimmers for a decade with global influence, and they spent that decade on a mysogynistic bender. TV shows & media reports all capturing their hedonistic lifestyles while they could have been respecting themselves and influencing youth to develop good habits and relationships. Now we have Nathan Adrian, Conor Dwyer, and others who do exemplify and model respect for women. This is a sensitive topic but one worthy to be included as it affects everyone. Anthony Ervin has been an open book on this subject, admitting to his own deviant lifestyle after his first Olympics and the… Read more »

Is there nobody out there who is happy &/ or adjusted to their circumstances?

They should have gotten married..

Well, Michael found someone else. They are great friends. Michael has mental health issues to begin with the ADHD which has co-morbidity issues that people thought back in the 1970’s that you would grow out. Also, people with ADHD have a higher percentage of having drinking problems or drug problems.

Just because they are friends? Do you not have friends of the opposite sex?