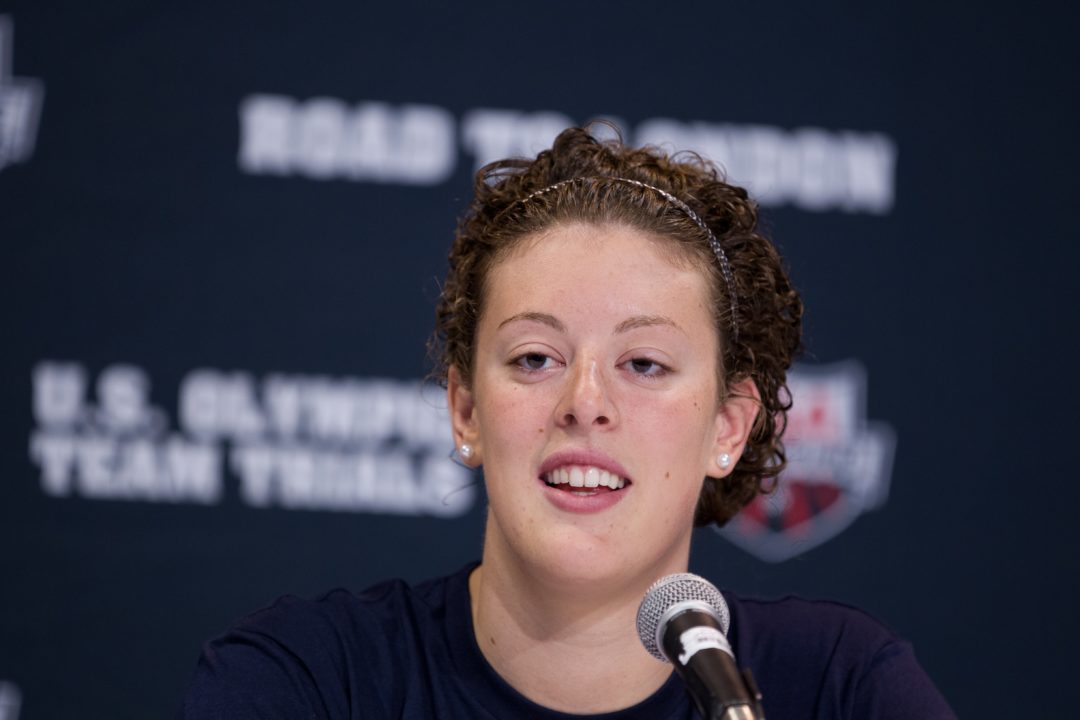 Five-time Olympic medalist Allison Schmitt opens up on the subject of her post-Olympic depression and encourages others not to be afraid to seek help. Current photo via Tim Binning/TheSwimPictures.com

To everyone around her, Olympian Allison Schmitt, appears to be the most cheerful girl in the room.  A jokester, a story-teller – someone who makes others laugh and whose smile is infectious.  Such is not always the case behind the scenes, however, as the five-time Olympic medalist has bravely opened up about her post-2012 Olympics bout with depression.

In an interview with the Associated Press last weekend at the Arena Pro Series meet in Charlotte, Schmitt described how, immediately following her performance in London, she started “feeling depressed” and not being able to identify exactly why.  Confounding to be sure, as Schmitt had performed incredibly at those Olympic Games, earning an individual gold in the women’s 200m freestyle, silver in the women’s 400m freestyle, as well as three medals as a member of the women’s 4×200 freestyle, 4×100 freestyle and 4×100 medley relays.

But, the success was not enough to let Schmitt bask in her Olympic glow. “I didn’t like myself,” Schmitt told the AP. “I didn’t like that I was feeling like that. I thought if I suppressed it, it would go away. But it was something where I needed help from outside sources.”

Returning to the University of Georgia after the Games, Schmitt was not seeing her usual gains in the pool and even failed to qualify for the 2013 World Championships squad, as well as the American team headed to 2015 Worlds in Kazan this summer.  Regarding her inability to get things back to her Londonesque-self, Schmitt said, “I don’t want to say it was (a lack of) confidence at the pool….it was more about the confidence in myself.”

“Maybe the post-Olympic blues started it, and it just kept crashing down from there”, she continued. This inner struggle was ever-present both in the pool and out most recently, as Schmitt was faced with a terrible personal tragedy in the form of a younger cousin committing suicide just a couple of weeks ago.

Without getting into any detail regarding treatment or even an official diagnosis, Schmitt stressed in the interview that it is important to let others dealing with any form of mental illness know that they are not alone.  “I know a lot of athletes who are very strong, who have a strong will, a strong passion,” Schmitt said. “They don’t really like to show their other side, their emotional side. That’s something very prevalent in athletes. That’s something in the future I would like to work on, to let them know it’s OK not to be OK.”

Schmitt will be representing the United States at the Pan American Games in Toronto this summer and will be joining Coach Bob Bowman at his new post as head of the Arizona State University swimming and diving program. Embodying the positive outlook Schmitt holds for others, longtime coach Bowman commented of Schmitt, “I’m not concerned at all.  I have no doubt she can get back to where she once was.”

I once read that success is a greater challenge than failure. Allison reached the top and we are all proud of her. I sincerely wish her the best no matter where her life path takes her. No matter where that is, she will always be a champion and a great inspiration to so many.

I’m so happy that Allison is swimming well again, but I’m even happier to hear that she’s feeling better! I was baffled about why her results in the pool fell off so quickly and assumed she had lost motivation; it sounds like that is somewhat true, but it never occurred to me that she might be suffering from depression. I admire her for seeking help as well as for her willingness to share her personal struggle with the world so that others might benefit from what she’s learned. Keep up the good work in AND out of the pool, Allison!

Bravo Allison! You’ll help many by being this open. You are a true Champion. Glad you are feeling better. You are loved whether you get another gold or not. Thank you!