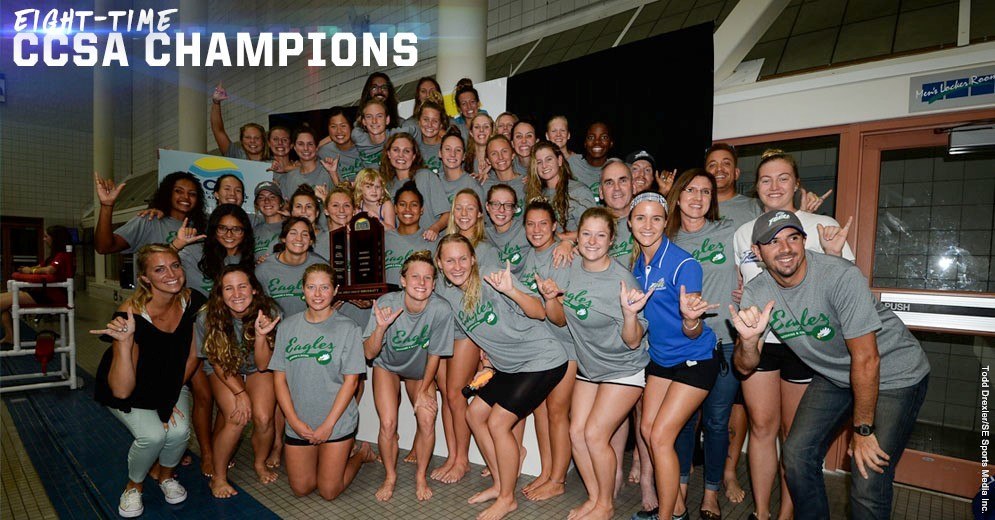 The final night of the 2017 CCSA Championships came and went, but it was familiar faces holding the trophies as the FGCU Eagles and the UMBC Retrievers defended their titles yet again.  UMBC notched the three peat on the men’s side, while FGCU won their 8th title in 9 years and further cemented their dynasty.  This was also Dave Rollins first season at the helm of the Eagles and he continued their winning ways, while getting his first Conference Championship title as a head coach in the process.

In the marathon event of the meet, the 1650, Kyrylo Shvets from Incarnate Word won easily in an NCAA B Cut time of 15:27.82.  He was nearly twenty seconds ahead of second place finisher and teammate Nathan Coppock who came in at 15:46.01, and was followed by Peter Wakely of Gardner-Webb who finished in 15:51.59.

On the women’s side Delia Weber from Liberty dethroned defending champion Lauren Ogelsby from Gardner-Webb as Weber went 16:40.72 to pull away from Ogelsby who finished in 16:50.82.  Freshman Liz Zeiger was able to get FGCU on the podium as her afternoon swim of 16:58.50 was good enough for third.

The men’s 200 Back saw a pair of swimmers hit NCAA B Cuts, and saw the UMBC Retrievers put up huge points with a sweep of the event.  Sophomores Alexander Gilese and Ahmed Wahby each hit B Cuts going 1:44.59 and 1:46.06 respectively.  Their teammate Garrett Wiochowski was then able to hit the pad in 1:47.40 to completely the sweep and further the Retrievers lead.

On the women’s side Doris Eichhorn from FGCU grabbed the win, coming from behind and just out touching Liberty’s Victoria Tschoke in 1:58.09 while Tschoke was 1:58.14.  Sandra Wilk from FGCU rounded out the top three going 1:59.89.

The men’s 100 Free was much of the same as the 200 Back as it was all UMBC again, this time going 1-2.  Freshman Ilia Rattsev took the crown in 44.23, while teammate Gregor Spoerlein went 44.31.  Jacob Zeidler from Old Dominion, and Connor Bos from Gardner-Webb literally matched each other stroke for stroke down the stretch and ended up in a tie for third at 44.78.

On the women’s side FGCU displayed their depth in the sprint group as Fanny Teijonsalo, Hannah Burdge, Katie Latham, and Gracie Redding dominated the event taking 1,2,3,4, and all going under 50.  Teijonsalo led the way in 49.26, followed by Burdge at 49.48, Latham at 49.94, and Redding at 49.99.

The men’s 200 Breast saw Jordan Mintz from Gardner-Webb win in 1:58.82, which was also good enough for a B Cut.  UMBC’s Kyle Paxton and Connor Ganley followed in 2:00.14 and 2:01.23 respectively to further distance the Retrievers from the field.

On the women’s side it was Alicia Finnigan from Liberty just touching out FGCU’s Christina Kaas Elmgreen by 2 one hundredths at the wall to get the win, Finnigan touched at 1:57.08, while Elmgreen hit the pad at 1:57.10.  Tessa Walsh from Gardner-Webb finished in third with a time of 2:01.12.

The final event of the meet saw the UMBC team of Ilia Rattsev, Jared Vance, Connor Ganley, and Gregor Spoerlein put one final exclamation point on the three peat as they took the event in 2:58.21.  Gardner-Webb followed in 2:59.18 and Florida Atlantic University rounded out the top three in 2:59.48.

On the women’s side FGCU left no question as to who was on top after that opening event DQ as the team of Katie Latham, Gracie Redding, Hannah Burdge, and Fanny Teijonsalo led wire to wire going 3:17.83.  Liberty finished second in 3:21.98, and Campbell was third in 3:26.64.