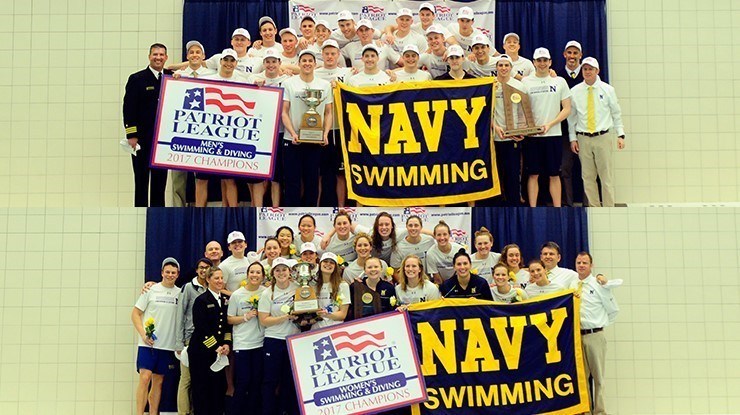 The Navy Men and Women won their respective titles at Patriot League Championships this past weekend.  The Navy women scored their 6th championship title, while the men continued their winning ways keeping their streak alive at 14 straight.  That was not without a little worrying in this years program, however, as the Army men pushed Navy to the very limit.

The men’s meet featured a dramatic back and forth battle between the Midshipmen from Navy and the Cadets from Army.  Navy and Army were virtually even every step of the way through out the meet, however, Navy was able to take 3 out of the 5 relays, whereas Army only took two.   That extra relay coupled with Navy going 1,2,3 on the 3M board on the final night all but sealed the 14th straight victory for the Midshipmen.  To finish it off the Midshipmen won the 400 Free Relay with the team of Joseph Jaime, Vince Everman, Zachary Piedt, and Bjorn Davis putting up a pool record 2:56.62 to finalize the win.

On the women’s side of the meet the Navy women led wire to wire winning every relay and setting pool records in 4 of the 5 relays.  In the 200 medley relay Elizabeth Graeff, Lauren Barber, Hannah Briant, and Kenzie Margroum came in at 1:40.59 good enough for the pool record and just off the conference record set last year. In the 800 Free Relay the team of Lauren Barber, Casey Lawson, Charlotte Meyer, and Kenzie Margroum set the new pool record of 7:11.29.  The 200 Free Relay saw the team of Olivia Morrell, Hannah Briant, Ally Warnimont, and Kenzie Margroum go 1:31.36, just off the conference record set by last years Navy team.  Finally Navy threw one final touch on an impressive win with one more pool record in the 400 Free Relay as the team of Morrell, Meyer, Barber, and Margroum go 3:18.95, again just of the conference record set last year.

One of my favorite swimmer names, the Army freestyler Evin Rude. No wonder he’s fast with a name like that!!