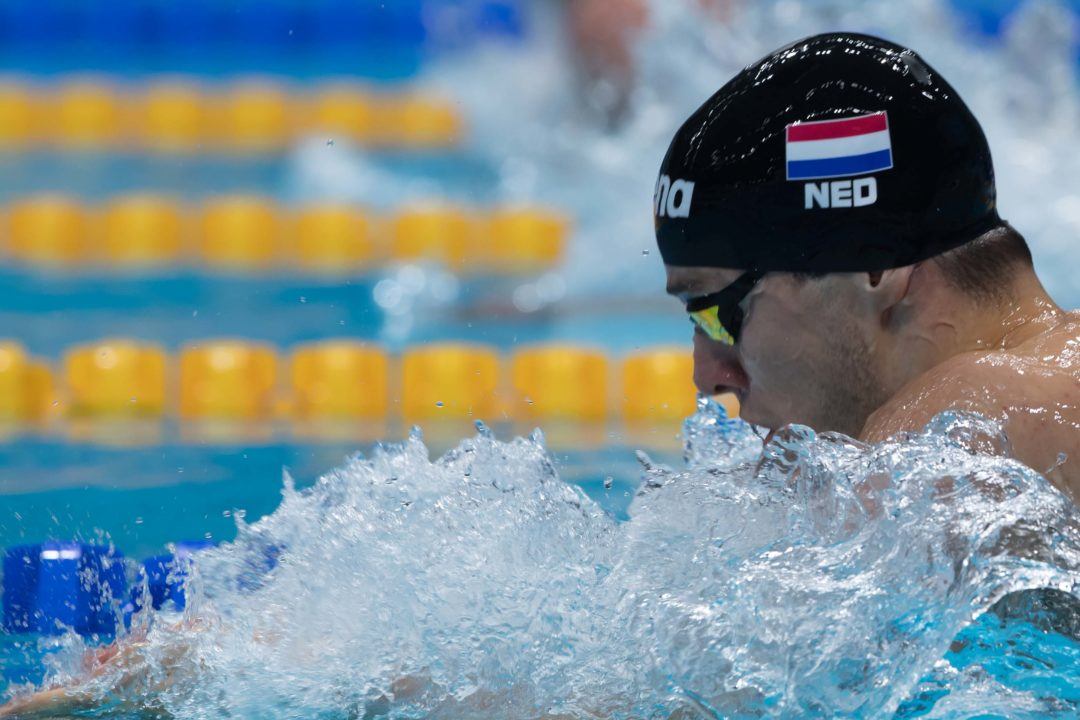 Dutch swimmer Arno Kamminga raced his way to the #2 seed in the men's 200m breaststroke in Eindhoven, clocking a new national record in the process. Archive photo via Mike Lewis/Ola Vista Photography

Cluster #1 of the 2017 FINA World Cup Series is almost complete, with the day 2 finals session just hours away in Eindhoven. Even with medalists now having the option to not swim prelims, several big names were still in the Pieter van den Hoogenband Swimming Stadium pool getting warmed up to make their final push to close out the first 3 World Cup meets with maximum cash earnings.

Ever-present Katinka Hosszu of Hungary was one of those swimmers, as the Iron Lady took the top seed in the 100m backstroke in a time of 56.95. Finishing less than a tenth behind was American Olivia Smoliga, who notched a mark of 57.03 to set herself up nicely for tonight’s final. Hosszu will also race the 400m IM’s fastest heat tonight.

Coming in as the 4th seed in the women’s 100m back was Colombian swimmer Isabella Arcila, the national record holder in this event who lowered her own mark with her morning swim. Entering the meet with a personal best mark of 58.30 from the 2016 Short Course World Championships in Windsor, Arcila scored an even lower Colombian national record this morning by firing off a new PB of 58.12.

Another national record was broken in the form of Arno Kamminga, the Dutch breaststroker who slid into the #2 position in the 200m distance this morning. Clocking a time of 2:04.74 to fall just .4 off of the top mark by Russia’s Kirill Prigoda in the AM heats, Kamminga hacked almost 2 solid seconds off of the previous 200m breast national record that stood at 2:06.80 by Sebas van Lith since 2015.

Belarusian athlete Ilya Shymanovich is also very much in the 2breast mix, situated 3rd with a swift 2:04.95. Tonight, however, the final field will include Germany’s Marco Koch and Russia’s Anton Chupkov, so nothing is guaranteed podium-wise with all the big guns lined up.

The men’s 100m freestyle saw South Africa’s Chad Le Clos wrangle up the top seed in a solid 47.08, while Russia’s Vlad Morozov, who earned 2 event wins yesterday in the 100m IM and 50m free, clocked a 47.29. Both men will see the 2016 Olympic champion in the LCM version of the event, Australian Kyle Chalmers, enter the field for tonight’s final.

The high-octane arsenal of women sprinters prolific in this World Cup were present again this morning in Eindhoven, led by Femke Heemskerk in the 200m freestyle. She nailed a morning outing of 1:54.11, with Italy’s Federica Pellegrini right behind in 1:54.61 to land in the final, where the on-fire Swede, Sarah Sjostrom, will be in the mix.

Sjostrom did get a splash in this morning, taking the top seed in the 50m butterfly. She notched an easy-looking 24.55, with Dutch woman Ranomi Kromowidjojo also under 25 seconds in 24.95. Both will be chasing Therese Alshammar’s 24.38 WR set way back in 2009. Of note, Australia’s Cate Campbell was also in this race, finishing 5th in 26.14 and will be in tonight’s final.

And WRs in finals! belmonte pips the Iron! And SS lowers 200 free!!

Belmonte Garcia just went 4:18.9 in the 400 IM for an out of nowhere world record! Holy crap

Mireia was almost 3 seconds back at the end of the backstroke leg, caught up to Katinka on the first 50 of breaststroke, and just motored past her. Either Katinka gave up, or spun her wheels a little too much in the first 200. 4:18.94 to 4:25.18. New World Record by nearly half a second. Wow!

Hosszu went 3 seconds above her PB in the 100 back 15 min later, maybe not feeling well. But amazing achievement by Belmonte! Now Sjostrom is the sole leader again with 7 WRs. It’s time she stops missing the 50 fly s/c WR by small margins.

SS missed that one but compensated on the 200 free…

She was also 2s behind Hosszu’s WR pace after backstroke and ahead by the end of the breaststroke. What a monster back-half.

Sjöström vs Pellegrini. Can’t wait to see.
Also good to see more US swimmers in the pool.
Next year it should be LC, Budapest/Rome/London, Florida/Texas/California, Tokyo/Sydney/Beijing, 3 days meets of Olympic events over weekends. Surely there would be prize money enough from broadcasting. NCAA medallists’ prizes would be paid to their colleges. No FINA at all. Just a question of organization, everything else is given.

bernhard reitshammer of austria swam a 47.81 in 100 free prelims – thats a national record too