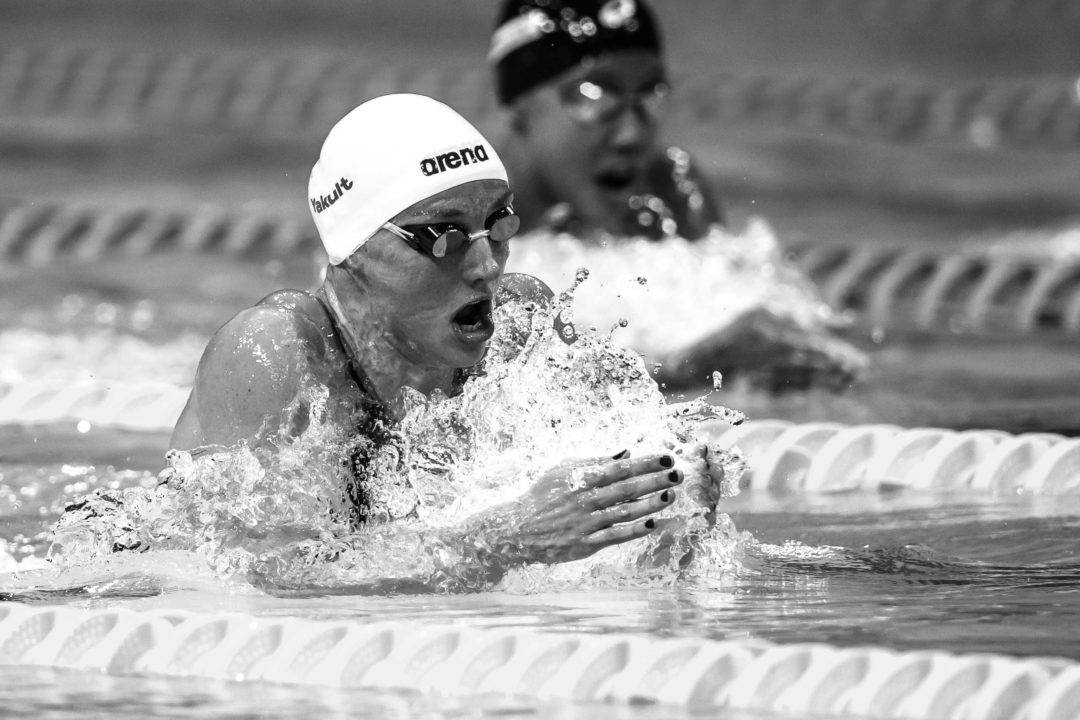 Katinka Hosszu will go for her first gold medal of these championships in the women's 200 IM. Current photo via Mike Lewis/Ola Vista Photography

Four finals and four semis will take place during the second of eight finals sessions at the World Championships in Budapest, with two of the sport’s biggest stars kicking off today’s action.

The men’s 100 breast final goes off first, with Great Britain’s Adam Peaty fresh off attaining the ten fastest swims in history after going 58.21 and then 57.75 on day 1. Peaty is poised to repeat as World Champion in this event, and will challenge his own world record of 57.13 set at the Olympic Games.

American Kevin Cordes is the running favorite for silver, after setting an American Record in the semis at 58.64. His teammate Cody Miller currently sits 3rd at 59.08, but it’s very tightly bunched with the other five swimmers behind them all 59.24 or better.

Another world record will be on watch during the second race of the night, as Sweden’s Sarah Sjostrom looks to lower her 100 fly mark of 55.48 after breaking the 100 free world record on day 1. There’s a great chance it falls after she looked comfortable going 55.96 and then 55.77 in the prelims and semi-finals.

Australian Emma McKeon tied the Aussie Record of Jessicah Schipper in the semis at 56.23, also tying her for 4th fastest performer in history. American Kelsi Worrell sits 3rd, and was 56.44 in prelims, while teenagers Rikako Ikee and Penny Oleksiak follow them in 56.89 and 57.07 respectively.

The first of the semi-finals will be in the men’s 100 backstroke, where China’s Xu Jiayu looked very smooth posting the top time of the prelims in 52.77. He’ll swim alongside Russia’s Grigory Tarasevich (53.18) as well as defending champ Mitch Larkin (53.72) in the second semi.

Lilly King (1:05.20) and Yuliya Efimova (1:05.60) not surprisingly posted the top times of the prelims in the women’s 100 breast, and will wait one more day before going head-to-head in the final. Katie Meili will swim with Efimova in semi 1, and Ruta Meilutyte will race King in semi 2.

From one rivalry to another. The men’s 50 fly will be the first finals showdown between Caeleb Dressel and Joseph Schooling, though the two are a bit friendlier than King and Efimova.

Both have had great starts to the meet, as Schooling has lowered his Asian Record in the event twice, and Dressel has a pair of American Records from this event and the 100 free, when he led off his American team to gold in the 400 free relay.

The women’s 100 back semis will be without Olympic champion Katinka Hosszu, as she scratched out after the 2nd fastest morning swim of 58.80. Hosszu’s scratch allows her to adequately prepare for the 200 IM final, which is shortly after these semis.

Kylie Masse led prelims in 58.62, and will hunt down Gemma Spofforth‘s world record of 58.12. Joining her in the second semi is Olympic silver medalist Kathleen Baker.

In the first semi we’ll see Emily Seebohm, the defending champ, who was the third swimmer under 59 this morning in 58.95. She’ll be joined by the other American, Olivia Smoliga, as well as Olympic bronze medalist Fu Yuanhui, who barely squeaked into these semi-finals in 1:00.52. She’s been 58.72 this year, so look for some outside smoke from her in lane 1.

The men’s 200 free is second last on the program, and will be a fun one to watch.

The first semi is led by defending champ James Guy of Great Britain and Townley Haas of the United States, and out in lane 1 we’ll see South Korean Park Tae Hwan. The three of them are 2nd, 3rd and 4th fastest in the world this year, so we should see some 1:45s if not 1:44s from these guys.

Olympic champion Sun Yang, who won the 400 free yesterday, leads semi-final 2 after being the only man under 1:46 in the morning at 1:45.78. The rest of the semi is tightly bunched, but Guy’s teammate Duncan Scott could give Sun the biggest challenge after being 1:45.80 earlier in the year.

The crowd will go nuts as the women’s 200 IM final closes things off. Hungary got a surprise bronze medal from their men’s 400 free relay team on day 1, and now they’re in for their first gold if all goes according to plan.

Melanie Margalis of the U.S. had a sensational swim last night in 2:08.70, becoming the fastest American ever in a textile suit. Canadian Sydney Pickrem broke the national record to qualify 3rd overall in 2:09.17, but they could be battling for bronze as we know what Great Britain’s Siobhan O’Connor is capable of. O’Connor qualified 4th in 2:09.72, but chased Hosszu last summer in Rio becoming the 3rd fastest performer ever in 2:06.88.

You can find all the start lists for tonight’s action here.

What time do finals start?

So many WRs could realistically fall… so exciting!

3
0
Reply
Rafael
Reply to  The Bull

If sjostrom breatks 100 fly WR roday (and she will almost for sure), she will get the Female swimmer of the meet, maybe even the year as Ledecky probably won´t break as many WR and Sjostrom (Who will break at lest the 50 free too).

Dressel seems on a streak to be male swimmer of the meet, problem is if Peaty, Hagino, Xu or Kalizs go on a WR break streak,,

Wouldn’t say that SS breaking W100fly WR is a “given”. Whilst it certainly could, she’s hardly going to be challenged to win so that impetus is not likely to be present. Its been her freestyle rather than fly that’s been on the boil this season; the fly has just maintained its usual level of excellence … which happens to be at least one level above any others.

I love Kalisz as much as the next guy, but what WR is he or Hagino realistically gonna break? While I think they can contend for gold/be the favorite in the 2/4IMs, but they’re a long way from the WR. Maybe they could take down Lochte’s textile WR in the 4IM, but that would still have the be a lights out swim.

In order of likelihood in my opinion:

Sarah might crush the 50 free based on her 100 testerday.. even more likely than Ledecky..

Men’s 50 fly is the one I expect most tonight cuz we all know who will win the other three finals.

Right, exactly what I thought.