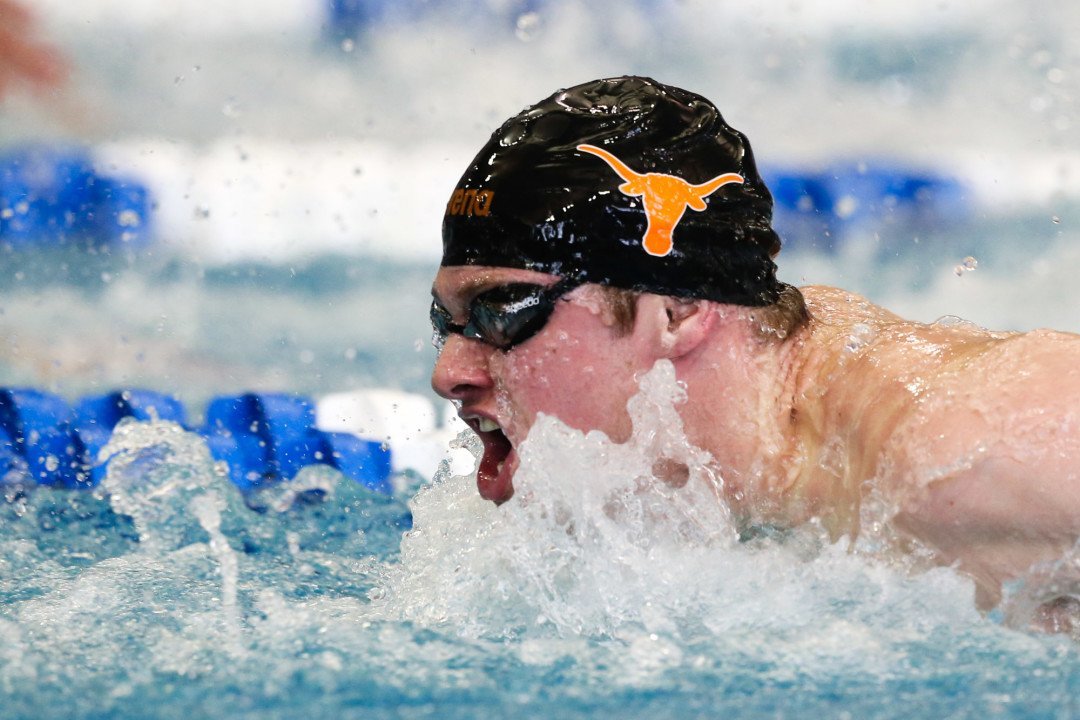 The Texas men are in position to defend their NCAA title, but the battle for the rest of the top 5 spots could get interesting. Cal and Florida are separated by 16 points right now, with the Golden Bears sitting in 2nd. Current photo via Tim Binning/TheSwimPictures.com

This year, we’re introducing a new angle on our traditional up/down rankings: and that’s the idea of “burned swims.” Basically, this will keep a tally of the number of swims that a team took (including scratches and DFS) to get to that number of up/downs. This is relevant because, for example, while Cal and Stanford didn’t have any finalists in the 500 free at the women’s meet, they also only had one swimmer entered between the two of them.

Note: Diving is expected to be completed by 3PM Eastern Time. We will update these up/downs then. The 1650 will be held this afternoon, with the top 8 swimming in finals. We’ve included projections for the 1650 in our summary.

Cal will look to put a dent in Texas’ lead in the 200 back, with Ryan Murphy and Jacob Pebley looking like they could go 1-2 for the Golden Bears. They also got a boost from Jeremie Dezwirek, who moved up into the consolation final.

Tennessee and Alabama each have a finalist, giving them a chance to move up into the top 5 after this event ahead of Georgia.

Texas did well in this event this morning, getting John Murray and Brett Ringgold into the A final, and Matt Ellis into the B.

Behind the Longhorns, NC State will look to gain some ground on Cal and Florida with their finalists, Simonas Bilis and Ryan Held. The Gators will send Caeleb Dressel into battle, though, and may pick up 1st place points if he can win the title.

Texas has Will Licon in the top 8 here to keep things going. Cal will look to distance themselves from the rest of the top 5 with Josh Prenot in the A-final and Connor Hoppe in the B-final.

Texas and Georgia will make the biggest moves in the 200 fly. Texas has Jack Conger and Joseph Schooling set to battle for the title. Georgia brings Pace Clark and Gunnar Bentz back in the top 8, and Mick Litherland will swim in the consolation final for the Bulldogs.

Things went as expected in the 400 free relay prelims, as the top 8 seeds all made it back into the championship final. Tennesse, Louisville, and Arizona will get a boost after improving to make the consolation heat.

The Texas Longhorns bring back the most A-finalists, with 6 ups. They also have the highest number of total finalists, bringing back 8 overall. The Texas men are in position to defend their NCAA title.

The battle for the rest of the top 5 spots behind the Longhorns could get interesting. Cal and Florida are separated by 16 points right now, with the Golden Bears sitting in 2nd. Cal has 4 ups and 1 down, while the Gators have 1 up and 2 down. However, Florida has Mitch D’Arrigo and Arthur Frayler with the potential to get top 8 points in the mile.

NC State has a 35 point lead on Georgia, but if they hold their seeds from this morning, the Wolfpack should be able to keep themselves ahead of the Bulldogs. NC State has 4 ups to Georgia’s 3 ups and 3 downs, but Georgia has nobody in the mile and NC State is projected to have 1 up, 1 down.

Alabama could potentially move into the top 5 as well. They’re 19 points behind Georgia, and bring back 3 ups and 2 downs to finals. They’d have to perform well in their races to make up the ground and pull ahead.