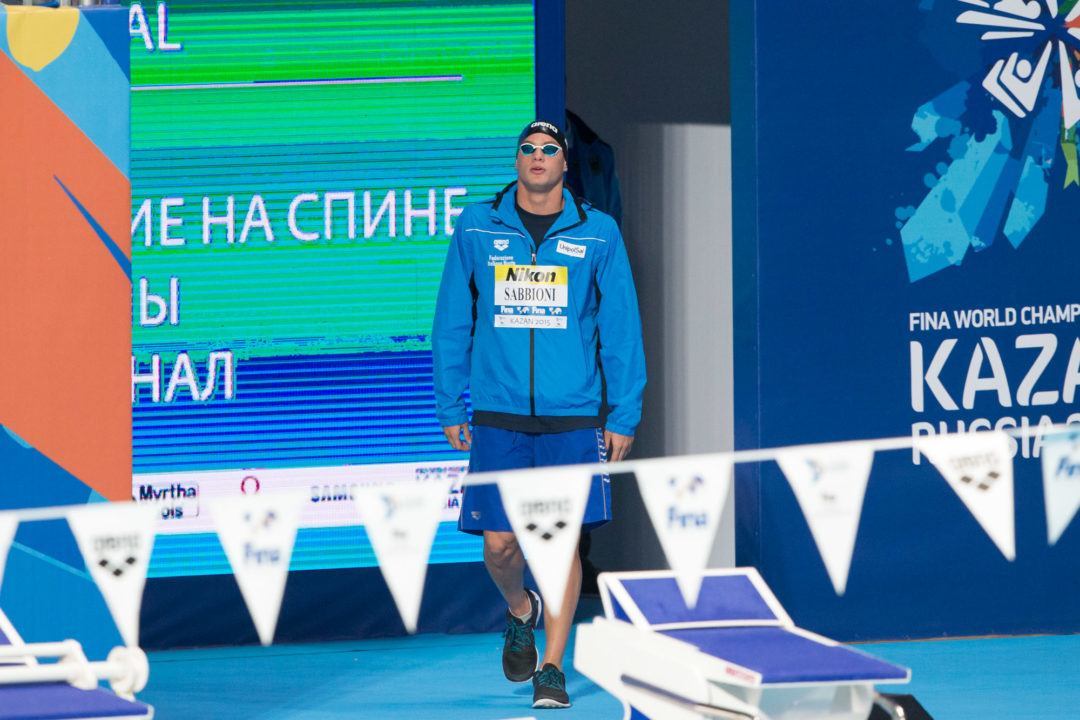 The Italian Spring Assoluti National Championships and Olympic Trials opened in Riccione on Tuesday, with 574 athletes from 141 teams. The meet is doubling as a selection meet for the Italian teams who will compete at 2016 Olympic Games in Rio de Janeiro, the 2016 LEN European Championships in London in May, and the 2016 European Junior Championships.

The Italian Federation has declared that its team for Rio will be made up of Italian medal winners from 2015 FINA World Championships in Kazan and of those swimmers who achieve the A, B, or C standards from the following table.

Olympic selections will be made as follows:

Defending champion Simone Sabbioni (Army / Swim Pro SS9) opened the Assoluti Championships with Italy’s third ticket to Rio (Gregorio Paltrinieri had already secured a spot on the team after his gold medal and in the 1500 in Kazan last summer, as had Federica Pellegrini with her silver in the 200 free) and a new national record in the 100 back, winning in 53.34 to take another 3/100 of his old mark.

Christopher Ciccarese (Rome Golden Flames / CC Aniene) was runner-up for the second year in a row; this time he finished in 54.63. Third place went to Michele Malerba (Larus) in 54.85. He touched 7/100 in front of Niccolò Bonacchi (Army / N Pistoiesi), last year’s third-place finisher, and 13/100 ahead of Matteo Milli (CC Aniene).

Italian record-holder Andrea Toniato (Yellow Flames / Team Veneto) avenged his third-place finish at the 2015 Assoulti with a win in 27.53 this year. Second place went to former national record-holder Fabio Scozzoli (Army / Imolanuoto) in 27.80, which is exactly what he went last year as runner-up. Lorenzo Antonelli (Larus) was the bronze medalist with 27.83.

Defending champion Alice Mizzau (Yellow Flames / Team Veneto) repeated her title with a 4:07.26, just over a second slower than her winning time from 2015. Diletta Carli (Rome Golden Flames / Tyrrhenian Swim) was runner-up for the second year in a row; she touched in 4:08.66, nearly 2 seconds off her 2015 time. Martina de Memme (Army / Livorno) rounded out the podium with 4:09.86.

Gregorio Paltrinieri (Rome Golden Flames / Coopernuoto) and Gabriele Detti (Army / SMGM Team Lombardia) went 1-2 in the men’s 1500 free, both sailing under the Rio qualification standard. Paltrinieri was dominant, but Detti was never far behind. They finished in 14:42.91 and 14:46.48, respectively, adding Detti’s name to Paltrinieri’s on the Rio list (note: Paltrinieri had already qualified thanks to his gold medal in Kazan). While Paltrinieri’s worldwide rank remains at #2, Detti improved his PB by 3.4 seconds and moves to #3 for the season.

With defending champion Marco Orsi (Rome Golden Flames / Uisp Bologna) out with injuries, the men’s 100 free belonged to Luca Dotto (Forestry / Larus). Dotto assured his spot on the Italian squad for Rio with a 48.40, finishing nearly a body length ahead of Luca Leonardi (Rome Golden Flames / Blue 91). Leonardi went 49.04 from the outside lane, surging over the second half of the race. Filippo Magnini (CC Aniene) was third in 49.31, touching out teammate Jonathan Boffa, who dropped a half-second to finish with 49.44.

The women’s 400 free relay provided an exciting ending to the first day of competition in Riccione. The CC Aniene “A” team of Miriana Durante (56.62), Rachele Ceracchi (55.91), Federica Pellegrini (53.30), and Marghertia Panziera (55.76) edged Army’s Letrari (55.55), Giorgia Biondani (56.59), Alice Nesti (55.49), and Erika Ferraioli (54.10), the same quartet that broke the national record at last year’s Spring Championships. CC Aniene were down by 4/10 when Pellegrini took to the water, and led by nearly 2 seconds when Panziera took over. Despite a strong anchor from Ferraioli, CC Aniene were able to get to the wall first and score a 3:41.59 to 3:41.73 victory over the defending champions.