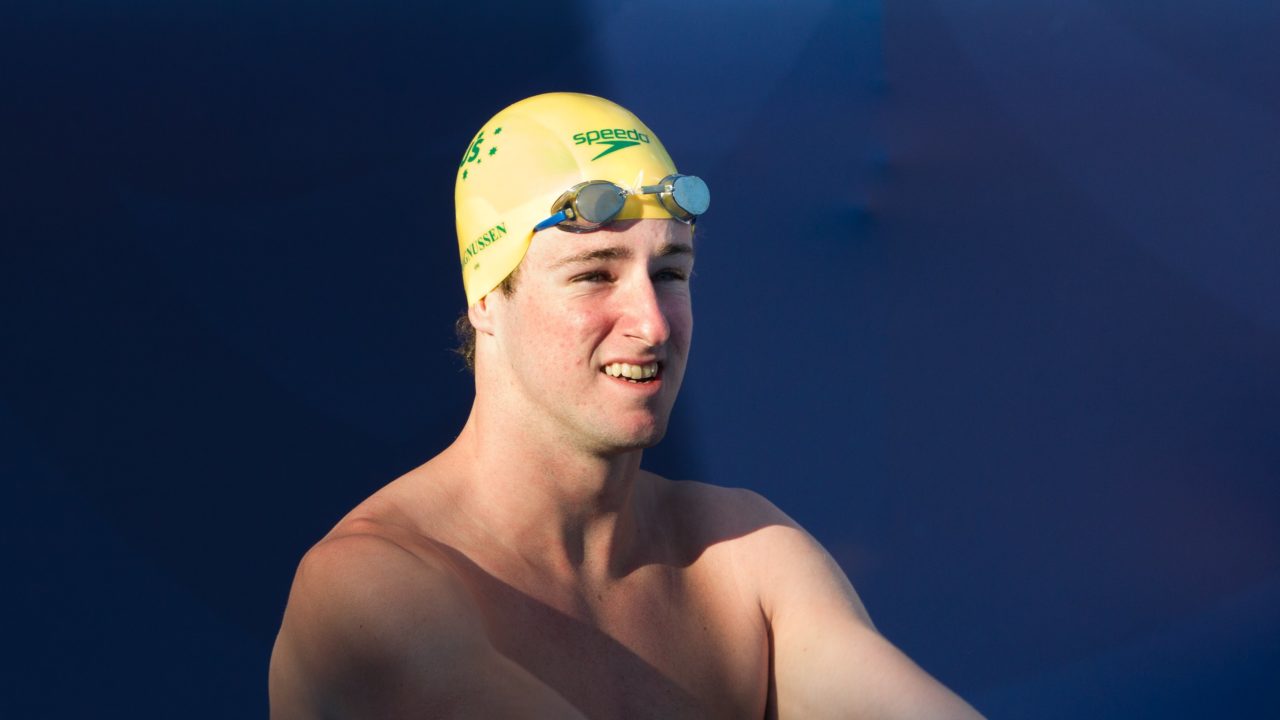 James Magnussen is the oddsmakers' favorite in the 100 free, but not by much. (Photo: Tim Binning/TheSwimPictures.com)

We here at SwimSwam do not gamble on swimming. It would be all sorts of unethical, and we’d probably be pretty good at it.

But, that doesn’t mean that it’s not a little entertaining to check out who the favorites are in different races according to bookmakers: people who ultimately have a lot of money riding on the ability to correctly pick winners of sporting events.

Last year at the Summer Olympics, all of the major European sports books were taking bets on swimming; thus far, all we’ve found is odds from Sky Bet and Coral.Co.uk.

See a comparison of odds at the two books here.

Below, check out some of the more interesting bets in the races. For simplicity’s sake, we’ve boiled down the wagers to what the payout will be on a $10 bet, in addition to getting your $10 back. We’ve combined the two books and listed the highest pay-out among the two at the top of the article.

Sun Yang’s coaches may not feel as though he’s in the best shape of his career, but with how little real competition there is in this 400 free, he is still one of the heaviest favorites.

The defending Olympic Champion Yannick Agnel is a big favorite in this 200 free, despite only a week ago deciding he would swim this race at all. The smart bet here would be to take ‘the field,’ which isn’t an actual betting option, but put ten on Izotov, Lochte, Stravius, and Fraser-Holmes each, and it would probably be a bigger payout.

This is one of the rare occasions upon which the defending Olympic champion is not the favorite, as the .01 difference between Magnussen and Adrian wasn’t enough to sway the oddsmaker’s of Adrian’s chance of winning again. Still, the expectation is that this is a three-man race between Magnussen, Adrian, and Morozov. Among those getting surprisingly little love is Brazilian Marcelo Chierighini, who won the Maria Lenk Trophy. He’s only pegged at a 41:1 long shot to win, tying him for 8th. That’s four spots lower than Olivier Porier-Leroy picked him. (Though, recall, that this is odds to win, not to odds to place 8th).

Florent Manaudou is the favorite in the 50 free, but a win by him would pay out a huge $32.50, with Adrian getting $43.40 and Morozov getting $45.00. These high payouts speaks to the unpredictable nature of the event.

This might be the safest bet of the meet, even if the odds don’t state it. The American medleys aren’t as secure as they were in 2012 after so many retirements, but with a back-half of Cordes and Adrian, and some combination of Grevers/Plummer looking still like the best backstroker in the world, the question mark is Eugene Godsoe holding onto Phelps’ spot in the fly. The Australians and Japanese all have weaknesses too, though.

This race could be unbelievable. It’s got two men who have broken World Records in the race in the last year, Gyurta (who wins at every big meet) and Yamaguchi. It’s got Kevin Cordes, who you might be surprised to learn has not broken the World Record yet, despite the hype. It’s got the world leader Michael Jamieson, and Vyacheslav Sinkevich who exploded at Russian Nationals. This is one I’d stay well clear of.

The two books have vastly different opinions of Hagino’s chance at an upset. SkyBet pays out only $40, whereas Coral pays out $50.

This is one of two individual races in which Lochte is the favorite. The other is the 200 backstroke, where he takes that honor over Japan’s Ryosuke Irie and Olympic gold medalist Tyler Clary by payouts of $23.80-$26.20-Clary $43.30.

Interesting thing here: despite the fact that Seebohm actually posted the fastest overall time in 2012, she is listed at just 9/2 odds, while Franklin is 4/11. Franklin is probably seeing improved odds because (1) she doesn’t have to swim the 200 free semifinal right before like she did in London, and (2) Seebohm hasn’t yet looked up to her 2012 form.  But anything can happen in a 100, and with that kind of payout, it couldn’t hurt to put take those odds.

Although Barratt has been just a half second behind Franklin this year, the oddsmakers clearly consider this a two-person race between Muffat and Franklin. With Allison Schmitt out of the picture, picking the winner of the 200 free became a whole lot more difficult.

The oddsmakers have Australia’s Cate Campbell is the favorite in the marquee women’s event, and why not?  Kromowidjojo has yet to bring it in the 100 free this year, sitting at #7 in the world, a full second behind the leader.  Campbell’s 52.83 is #1 in 2013 by six tenths of a second over Franklin.

This one is viewed as a bit of a toss-up, with Kromowidjojo’s pure speed giving her the slight edge here.  Coral views this race as being even closer, giving Campbell 3/2 odds, meaning a $10 bet would win you $15, returning a total of $25.

The odds here aren’t particularly interesting; Jiao Liuyang, the defending Olympic champion and #1 in the world in 2013, is the heavy favorite.  The point that sticks out, though, is the “world record” bet, which comes in at 12/1 odds, easily the lowest of the women’s events.  Liu Zige (who is in the field, and given 14/1 odds) set the record of 2:01.81 back in 2009, more than 2 full seconds better than Jiao’s textile best of 2:04.06.

Franklin’s 200 back is easily the lowest-paying bet on the women’s side, returning just $1.10 (plus the $10 you originally put down) if Missy comes out on top.

Note: this post is for entertainment purposes only. Only gamble if it is legal for you in your area, and if your conscience allows it.

In case anybody is wondering about the men’s 4×100, the odds ratios favor Russia for gold, Aussies 2nd, and France/USA tied for 3rd. The odds seem to mostly go by best times for the year or added up times for relays, so there is definitely some money to be made for the more discerning swim fan.

If you refer to Swimswam’s article on this topic prior to London 2012, you could have snagged quite a tidy sum picking Chad Le Clos for the 200 fly, and a decent amount in the case of Nathan for the 100 free!
http://swimswam.com/european-bookmakers-set-odds-for-olympic-swimming/

I would almost be tempted to put in a few virtual pounds on Missy in the 100 free, and on Liz Pelton in the 200 back. Both highly unlikely outcomes, I know, but not completely outside the realms of possibility IMO, and those odds are rather tempting…

You’re on the right track, those are the types of bets I’m going to go for, the mild upsets, though I can’t afford to put down nearly as much as I’d like to! 😉

Pretty sure someone made a killing last year betting on Meilutyte and Ledecky to win their respective events.