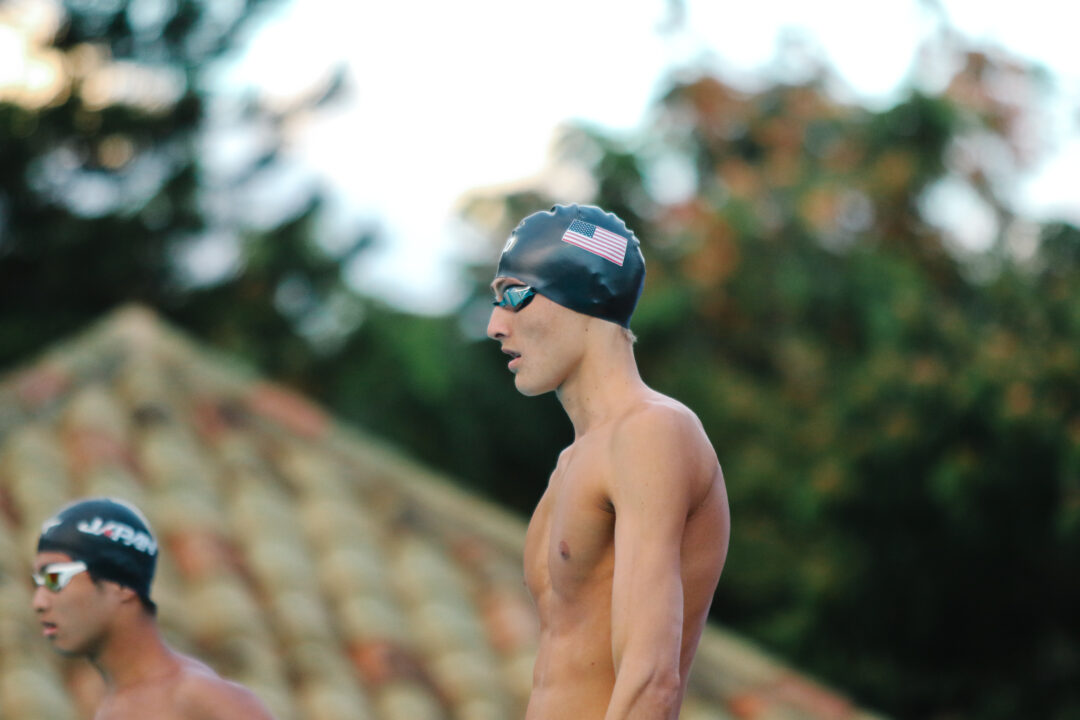 Come for Kaii Winkler's effortless freestyle stroke, stay for his splashy celebration after breaking the 15-16 NAG record in the 100-yard freestyle. Archive photo via Jon Reiter

Come for Kaii Winkler‘s effortless freestyle stroke, stay for his splashy celebration after breaking the 15-16 National Age Group (NAG) record in the 100-yard freestyle earlier this month at the Florida 1A High School Championships.

The homeschooled 16-year-old began the finals session by throwing down an impressive 18.98 freestyle anchor split in the boys 200-yard medley relay. Winkler’s South Florida Heat squad placed second out of lane five (lane one is closest to the camera).

Then only about 10 minutes later, Winkler won the 200 freestyle with a time of 1:34.18, breaking Caeleb Dressel‘s Florida high school record of 1:34.69 from nine years ago. Swimming as the top seed out of lane four, he shaved over a second off his previous best 1:35.41 from March.

Winkler was just getting started. In the 100 free final, he clocked a 42.52 to reset the 15-16 NAG record set by Ryan Hoffer in 2014. In the process, he also broke a decade-old Florida high school record (42.95) belonging to Ryan Murphy. The record-breaking win was certainly deserving of a huge celebration afterward (lane four).

Winkler is now just a couple tenths away from the national high school record of 42.34 held by David Nolan since 2011. It was his first time sub-43 as he improved upon his previous best of 43.04 from March.

Winkler is continuing his momentum from the Junior Pan Pacs in August, when he brought home a silver medal in the 50-meter freestyle (22.50) and helped the 400 free relay team set a world junior record. He anchored the relay with a 48.95 to help the U.S. take down the previous mark by just one one-hundredth of a second.

Winkler, who competes at the club level for Eagle Aquatics, was ranked as the No. 3 recruit in SwimSwam’s way-too-early rankings for the class of 2024.

I will tell you this! This young man is built JUST like POPOVICI! Stream lined! Smooth silky freestyle stroke! This could be the US’ answer to POPOVICI in the near future! JMHO!

The videos mentioned he was classified as a sophomore, which would mean high school class of 2025, but he is homeschooled, so who really knows when he’s going to graduate. So that high school lucked out in picking up Kaii as a homeschool athlete.

I was going to mention that, couldn’t tell if it was some weird angle or something he was actually doing.

Thorpe and Hackett experimented with it in the early 2000s. Some others whom I can’t recall from that era also tried a quicker 1-2 freestyle breakout that almost looked like a survival butterfly

This dude is the real deal.

This kid is insane

Is this US Government’s response to the Romanian superweapon?

Obviously still too early to say, but he’s a very promising prospect.

I think the US government ought to throw some money at the project. 😉

There’s similarities in the stroke technique perhaps. Hard to tell anything conclusive from this video.

Kaii Winkler- the big K, the big Potassium. Will he be able to neutralize the Chlorine Daddy somewhere down the road? Time will tell.

Will he compete representing USA? I know he has competed at some German national championships.

I mean he was at Pan Pacs this summer?

Thanks I missed that

So similar to David’s stroke and same body build too!!

Except probably 2 inches taller. Seems to be same hight as kibler. Chlorine father is 6’3”