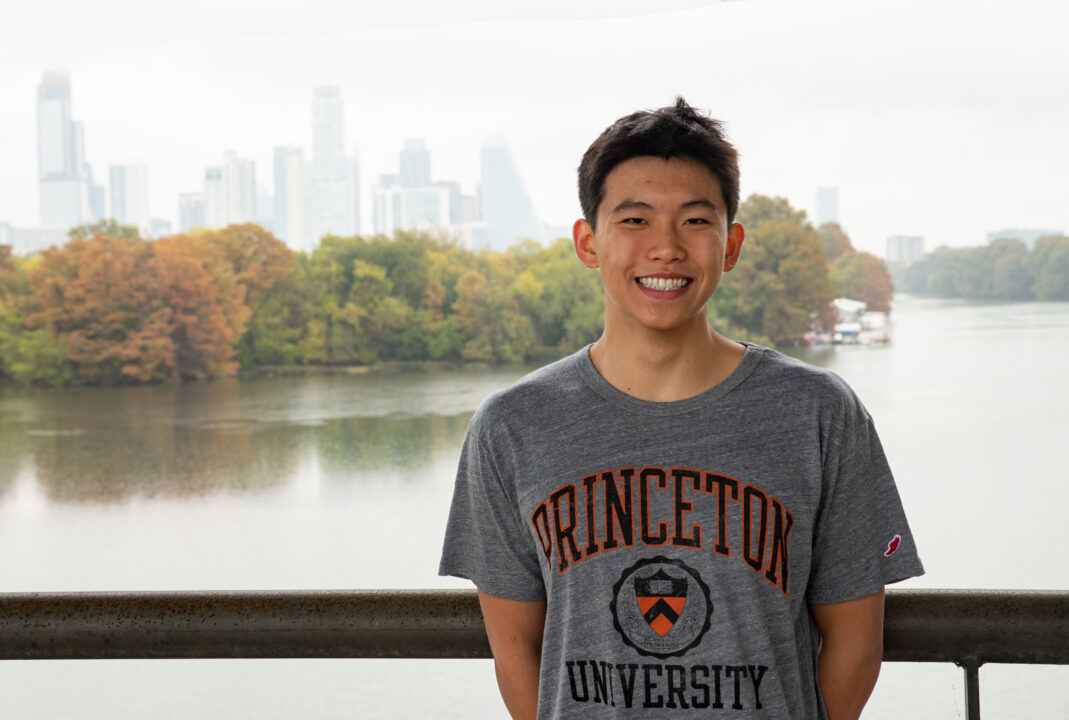 2022 National Select Camp invitee Andrew Zou, #15 in the class of 2024, has verbally committed to Princeton. Current photo via Andrew Zou

Andrew Zou, a high school junior from Longhorn Aquatics in Austin, Texas, has made a verbal commitment to the application process* at Princeton University. He will begin in the fall of 2024.

“I am beyond humbled and honored to announce my verbal commitment to the application process to Princeton University. I thank God for this opportunity, along with my family, friends, and coaches who have supported me on my journey. Lastly, I’d like to thank Coach Matt and Coach Abby for this amazing opportunity. Go Tigers!”

Zou will suit up for the Tigers in the fall of 2024 with sprinter Logan Noguchi. His 200 breast time would have scored for Princeton in the A final (along with then-sophomore Brian Lou) at the 2022 Ivy League Men’s Championships. He also would have been a B finalist in the 100 breast and a C finalist in the 400 IM.

In addition to being a dedicated athlete, Andrew is an terrific student. A Goal Achiever!

Whoa!!!! Those times are insane! Princeton’s top 20 NCAA finish is on the horizon

Way to go! Princeton is an amazing school!

Wow Princeton putting together a great 2024 class. Andrew is going to be an absolute beast.

Yes, these are good gets for Princeton, but these kids are clearly more focused on academics.

Obviously Farris was an exception and a one man recking crew, but I would be shocked if any Ivy League school places top 15 (even top 20) at NCs this year.

Fallon is a one trick pony at the 200 breast, and at best, picks up 18 points as there’s no way he’ll beat Marchand.

I’ll certainly be rooting for the ivies, but people expecting top 15 results from a few good recruits need to rethink their expectations

You seem to forget Fallon had one of the best 1000 times out of HS and is also elite at the 4IM (just swims the 100 instead). Maybe the Ivies aren’t quite at top 10 level yet, but that’s not a reason to dismiss the entire league

Re Fallon, he indeed had an elite high school 1000 (856 without competition) and an elite 400 IM (344 as a 16 yr old) but I think his approach to the sport is a little different (and IMHO smarter) than most other swimmers, in a way that doesn’t necessarily conduce to maximizing points at conferences or NCAAs. Instead of spreading himself thin, trying to be all things to all people, he seems to be focusing on a single event that he could conceivably win. This is esp true outside of the NCAA as he is obviously a better LCM than SCY swimmer (where contra Andrew he is about a second ahead of Marchand in the 2BR).

I wonder if this was part of his reasoning for picking Penn. At Cal or Texas or NC State or Florida or etc., he would need to maximize. At Penn…he can prioritize his goals (though I know they’d never say that out loud).

Great choice and congratulations Andrew! I was IM/BR at PU and dropped a lot of time and had a ton of fun. Go Orange and Black!