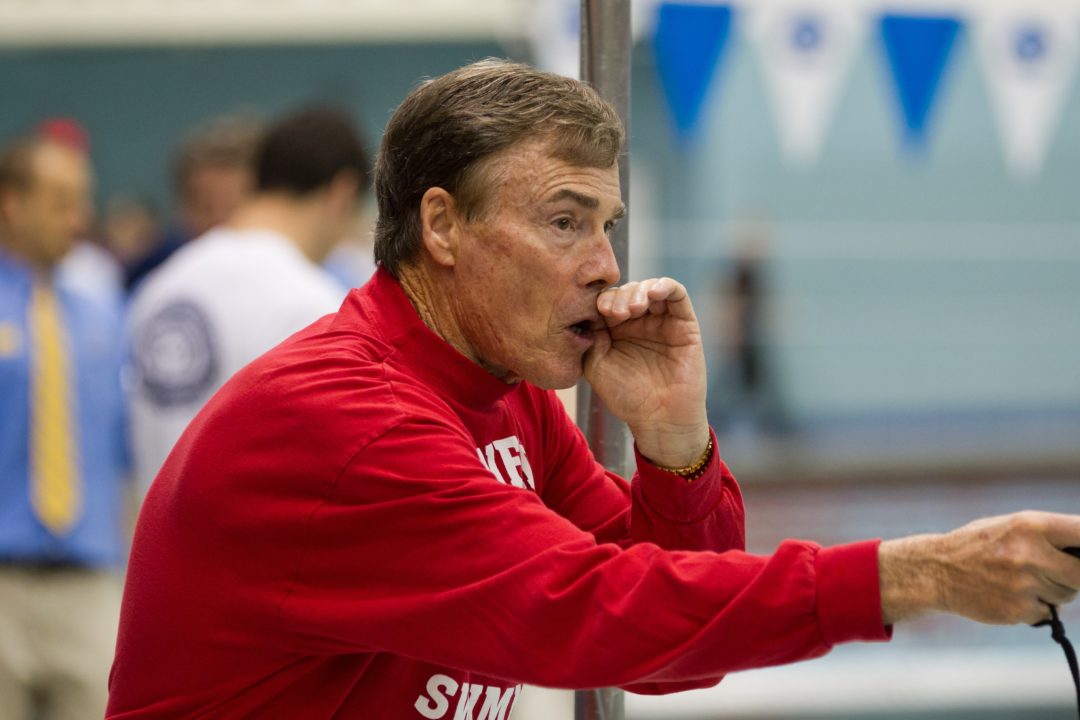 Kenney had an illustrious career at Stanford University, leading the Cardinal men to seven NCAA Championship titles during his 33-year run as head coach. Archive photo via Tim Binning/TheSwimPictures.com

Allen “Skip” Kenney, one of the most successful coaches in NCAA history, died on Sunday night. He was 79 years old.

Kenney fell and fractured his hips three weeks ago, and after surgery with the hope of regaining some mobility, his condition never improved.

The 1992 squad set NCAA meet records for points scored (632) and margin of victory (276 over Texas), and the 1998 team became the first to have a representative in every championship final (both individual and relays). The points-scored record was surpassed by Auburn in 2004 (634 points).

Kenney also led his swimmers to 31 consecutive Pac-10/Pac-12 titles, coached 134 All-Americans and 72 NCAA Champions, and was named the NCAA Coach of the Year six times and the Pac-10 Coach of the Year 20 times.

He retired as Stanford’s head coach in May 2012.

Kenney also had an impressive career on the international stage, most notably being named head coach of the U.S. Men’s Olympic team in 1996. He was also an assistant coach at the 1984 and 1988 Olympics, served on the U.S. coaching staff at the 1987 Pan Am Games, 1993 Pan Pacs and 1994 World Championships, and was the head U.S. men’s coach at the 2004 Short Course World Championships in Indianapolis.

Born and raised in Fresno, Kenney played baseball and dove at Fresno High School. Upon graduation, he joined the U.S. Marines, went through boot camp, and served in Vietnam for 13 months from 1965 to 1966, including four months as a sniper.

He said he drew on his military experience in developing his coaching style.

Kenney’s first swim coaching position came as an assistant to Don Gambril from 1968-71 at Phillips 66 Long Beach (which ultimately became the Long Beach Swim Club), and also coached at Long Beach State during that time.

Gambril was hired as the head coach at Harvard University in 1971, and Kenney followed him, staying there for one season before taking the head coaching position at the Houston Dad’s Club in Texas. He then moved to the Cincinnati Marlins, coaching a pair of swimmers to the 1976 Olympics in Montreal and three to the 1980 U.S. Olympic team that didn’t end up competing due to the boycott.

In 1979, he took over as the head coach of the Stanford men’s team, beginning what would be more than three decades of unmatched success. Prior to leading the Cardinal to their first conference championship in 1982, Stanford had not won the title since 1958-59.

His run of 31 straight conference championships is the longest in Pac-10 history (now Pac-12) across any sport.

In 2004, Kenney was inducted into the International Swimming Hall of Fame (ISHOF).

Over the course of his career, Kenney coached a total of 18 swimmers to the Olympic Games, winning 10 gold, three silver and three bronze medals. The list of Olympic gold medalists includes Kurt Grote, Joe Hudopohl, Pablo Morales and Jeff Rouse.

In spite of his success, the end of Kenney’s career was under a cloud of controversy. He was suspended by Stanford in March of 2007 after admitting that he had intentionally erased school records and top-ranked performances from the team’s media guide of several athletes who he clashed with.

The suspension led to Kenney missing the 2007 NCAA Championships, with associate head coach Ted Knapp taking over in the interim.

An investigation launched by the university found a pattern of conflict between Kenney and certain swimmers he coached, including NCAA violations of voluntary workouts and allegations of abusive treatment of athletes.

In April 2007, Stanford announced that Kenney would serve a 60-day suspension without pay and then return to his position as head coach. Kenney issued a public apology when the school announced the suspension.

After Kenney’s retirement in 2012, Knapp took over as head coach for seven seasons before stepping down in April 2019.

I swam for Skip in the early 70’s. No nonsense, to the point and always serious. I grew as an athlete under his coaching. I visited Skip the first winter he went to Dad’s for a week of long course training over Xmas vacation. The club practiced all week long, had Xmas day off, well all except for Skip and I. I thought he was kidding when he said we were going to the pool….. I should have known better.

Never liked Skip as a person, never liked him as a coach, but as a Patriot… you couldn’t find better. The man wasn’t a guru of technique but he didn’t pretend to be. He could be a jerk, sure, but he was never fake. As genuine as you get, like it or not. RIP Skip.

An ultimate builder and believer of teams. No one person is above the team. We win and lose together, whether you’re an NCAA champ or a walk-on.

I’ve taken so many lessons with me into the “real world” in life after swimming. He used to repeat the quote “Don’t let being good be the enemy of being great”. He even once said (to which we laughed at the time) “doing it 99% right is 100% wrong.”

He demanded a lot of us, but that’s part of building a culture of excellence.

I swam for Skip at Stanford from 1981-1983. Stanford had some great recruiting classes around that time (Dave Bottom, John Engs, Jon Denney, Carter Cast, Mike Conaton during my year, Dave Sims the year before, John Moffet the next year, Pablo Morales and Jeff Kostoff the following year), which put us over the top. Skip surprisingly gave me a lot of attention (I wasn’t quite at the level of those guys) and pushed me very hard because he saw potential that I didn’t think I had. He was a tough guy to swim for, but as others have noted, he truly believed that swimming was a “team sport” and advocated this to us every day. As a result, we were… Read more »

As the camp director at Stanford for the past 20 years, I had the privilege to work with/for Skip. I remember wondering how he could be such a great swim coach, when he was never a swimmer. He told me that he didn’t coach swimming, he coached people with as much passion as he had. He believed that swimming created an environment where the success of one depended on the support of many. I will be forever grateful for his mentorship and lessons. RIP, my friend.

Agreed, Kathy! Wonderful coach and man, he will be missed!

I never had the privilege to swim for Skip, but I did get a chance to know him a bit and loved talking to him about swimming and other things. He was definitely an interesting character.

The one thing I’ll say about Skip was that he was as passionate about swimming being a TEAM sport as any coach I’ve ever met. Swimming is such an individual sport–we largely swim alone with only ourselves to push us during sets and races, and glory in swimming is largely an individual thing. But for Skip, at least from the conversations I had with him as an outsider, coming to swim at Stanford meant coming to be a part of the team first.… Read more »

I had a the privilege as a young swimmer to attend a Stanford Swim Camp, run by Skip and Richard Quick. Skip was gracious to all the kids in attendance, and you left with dreams of coming back to swim one day for such a prestigious and storied swim program.

It sounds like at times he let some pettiness get in the way of his career, and ran his program at times more like a Marine boot camp from the 60s vs a modern swim club.

But he certainly knew how to produce amazing results and bring the best out of many swimmers. RIP Coach