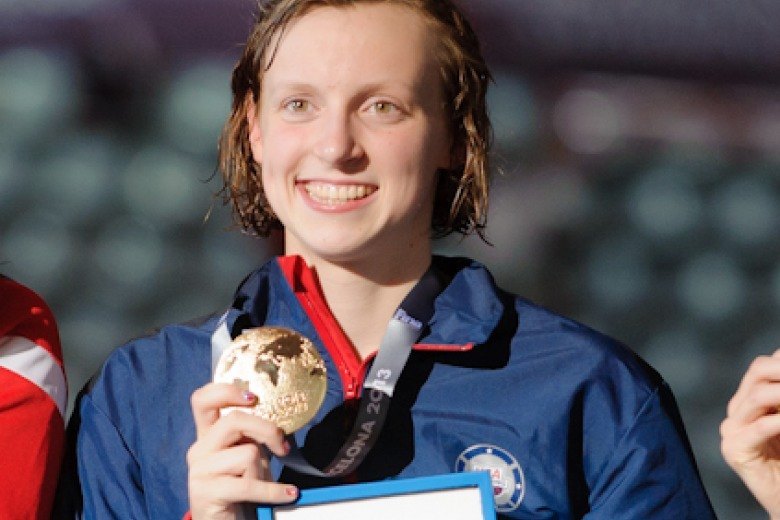 Katinka Hosszu, the reigning Olympic Champion in the 200 IM, will have to hold off a young field to top the podium for the second-straight Olympics.

Caeleb Dressel will head into the Tokyo Olympics as the fastest entrant in the men’s 50 and 100 freestyles, and 100 butterfly.

Basketball player Sue Bird and baseball player Eddy Alvarez will carry the flag for the United States at the Tokyo 2020 opening ceremonies.

In February of 2012, Katie Ledecky emerged onto the scene in the 800 meter freestyle when she scorched her field at the Missouri Grand Prix with a scintillating time of 8:30.14.  Already a National Age Group Record holder in the 500 and 1000 freestyles in short course, Ledecky’s emergence in long course foretold her rise to dominance on the international scene.  As a 14 year old, the time was the second fastest all-time for the 13-14 age group, just behind a legendary record by Cynthia Woodhead, which stood at 8:29.35 from 1978.  Old-timers may remember that Cynthia “Sippy” Woodhead was a dominant distance swimmer at a very young age just like Ledecky, but was prevented from bringing home a large medal haul by the United States’ boycott of the 1980 Olympics in Moscow.

Since this breakout performance in Missouri, Ledecky has gradually ascended to the pinnacle of women’s distance swimming.  Ledecky would go on to stun thousands at the CenturyLink Center in Omaha during the 2012 US Olympic Trials when she easily defeated fellow countrywoman Kate Ziegler with a superb 8:19.78, a new Olympic Trials record.  Just a month later, Ledecky continued to let her momentum snowball, as she upset hometown favorite and reigning champion, Rebecca Adlington, at the London Olympics.  Ledecky’s 8:14.63 shattered the legendary American Record of 8:16.22 that had been established by Janet Evans back in 1989, and just barely missed the 8:14.10 World Record that Adlington had established four years earlier in Beijing.

And now, at the 2013 FINA World Swimming Championships in Barcelona, Ledecky has completed one of the most historic sweeps in swimming history by winning the 400 meter, 800 meter, and 1500 meter freestyles all in American or World Record fashion. On day 7, Ledecky swam a very tactical 800 and came out on top over Denmark’s Lotte Friis with a new world standard of 8:13.86.  In a race that saw Friis lead for over 600 meters, Ledecky harnessed her signature finishing strength in order to track down Adlington’s world record, and Ledecky’s fourth gold medal of these World Championships. Of course, this also means that Ledecky establishes a new 15-16 age group record in the process.

It is worthwhile to mention that Ledecky’s 800, as impressive as it was, followed a pace that was actually slower than her 1500 from day 2 for the first 600 meters.  This likely reflects a combination of the week-long fatigue that has overcome a majority of the swimmers at the competition, along with a varied approach to the race take by Ledecky.  As we are in a unique position in swimming history where proposals are being made to add the 1500 meter freestyle to the Olympics in the women’s program, Ledecky’s physical ability to excel in all of the distance events one after another combined with the strong competition she faced from Friis provide a strong case for the addition of the metric mile.

With all of her World Championship races behind her now, and three new world records to her name, what is left for Ledecky to accomplish? At the rate she’s going, the sky may not be high enough of a limit.

Anyone on Sunday who wondered if Simone Manuel would be intimidated by the environment- she gave us her answer today.

Multiple golds for Katie and Missy- it comes down to how many WR you set to decide who is swimmer of the meet. Insane.

The American teenagers looked great today (and all week). What is scary is that there is a ton of talent in the States knocking on the door.

I agree completely. Now is the time for the young male swimmers to step up and stake their claim just as the ladies did.

Remember when people were so quick to jump to doping conclusions when Yi Shiwen out performed everyone and set new records at the London Olympics? Interesting that they don’t say anything about Ledecky.. I’m not saying Ledecky’s performances are at all questionable, but it just shows how quick the media and some coaches are to put other athletes down and take away from their moment of glory when they outshine home grown talent.

Was rooting for Ervin all the way. Disappointed he didn’t walk away with a medal.

actually there was a TON of stuff (mostly international media) about ledecky “doping”…all WRONG of course…but nevertheless.

Glad Katie has had the chance to prove them all wrong AGAIN (and really, throughout this entire year). So incredibly proud of her, and our entire US team! Go TEAM USA!!!

I think what really makes her stand out is that her technique is impeccable. Really graceful in the water! It seems like her freestyle stroke is very similar to Phelps.

I have never seen it in any respectable outlet.

Show me & I will rethink.

On her side she looks perfect – tall ( not too tall for distance) & rangy . She is as tall & more shouldered than Steve Holland was at 16.

I think when Ledecky starts bringing it back as fast as Sun Yang or Grant Hackett we’ll start questioning whether or not she is doping. Until then, I just see hard work and determination from her.

Fortunately, Yang or Hackett has incredible closing speed, so it is out of question if Ledecky can ever match theirs.

Meanwhile, Lochte has among the worst closing speed in the 400 that even a girl can beat him.

By the way, Adlington’s last 50 also beat Lochte’s or Ye’s.

When Meager swam 2:05.96 who would have made the final in the men’s event (which would be around 1:58 in todays standard), people put it down to talent

But when Shiwen swam 4:28.43 which would have only finished 50th in US 2012 trials in the mens event, people attribute it to doping.

And then people conveniently ignore that Shiwen’s has been on international scene since she was 13, and already swam 4:33 when she 14 in 2010.

Put it back in the deck. The difference was the extensive and open USA Swimming testing when it comes to doping. It is merciless and unforgiving. Ask Jessica Hardy.

China gets questioned because of a) the tendency to have many fast women, but few men, and their secretive doping testing that isn’t at all forthcoming (at least in past years)

If sports and other countries were as extensive and consistent as USA Swimming in the field of drug testing, there would be much more effective results.

Actually, China has made great strides in the past 10 years to punish their swimmers dopers (and their coaches).

As for Hardy being made as an example for the effectiveness of USA swimming, you can also make an argument that Hardy was being stupid, not that I am arguing that doping test regime in USA is not effective (However, as we can see in many other sports in USA, the dopers were never tested positive).

Meanwhile, I am concerned with the lack of scrutiny that people here give to russian swimmers. They have had the most number of failed doping tests in the past year, and the track and field community are in deep discussion over “incredible” performances by russian… Read more »

For those who are interested, the following link shows the Top 50 World Performances by gender based on FINA points. The results are also sorted by event and country.
http://www.teamunify.com/pnws2/__doc__/2013_TOP_50_PERFORMANCES_BASED_ON_FINA_POINTS.pdf

400 Medley Relays… I’m concerned about the women. I really hope the USA coaching staff puts Romano on the anchor. I’m putting out here what *I* would do if it were me filling out the cards… not what I think the coaches will do.

I agree and I believe that these will be the line-ups.

I would not put Romano on the relay. I’m worried that lightning has struck twice but it won’t strike a third time. I think she swam out of her gourd at the WUG and in the WC 4×100 free relays but a 53. would not surprise me if she tried again. I feel like Vreeland and Coughlan are both as good or better options.

Even if lightning has struck twice, and she swims a 53, I don’t think that the choice would be regrettable.

Coughlin’s split, while brilliant, was helped by a draft and it was just a really special swim for her that I doubt she could duplicate.

Against Cate Campbell, Romano is the best choice.

A little confused about one of your statements… How would ledecky’s dominance in both of the distance events increase demand for the mile? If, say, friis had gotten the world record in the 800′ while ledecky got it in the mile, then I could see the argument, but the fact that the top three in both are identical, I think lends itself more to the idea that just one distance event is sufficient… That being said, I would love to the the women’s mile become an Olympic event… I just don’t see how the results of this meet could possibly be a step in that direction, considering the medals were exactly the same in both

I apologize, I can see where your confusion lies. The direction I was heading in was more speculative than anything. The fact that the woman’s mile is not already in the Olympic program is fairly silly, and I was hinting at the idea that this only so because of the very old-fashioned and traditional mindset that women cannot compete in the mile the same way men can. I think this approach is pretty outdated since Ledecky’s ability to thrive in the 400, 800, and 1500 all in one week clearly shows that women can compete in the long distance races very, very well. If this is the sole hindrance to the mile being a part of the Olympic program, then… Read more »