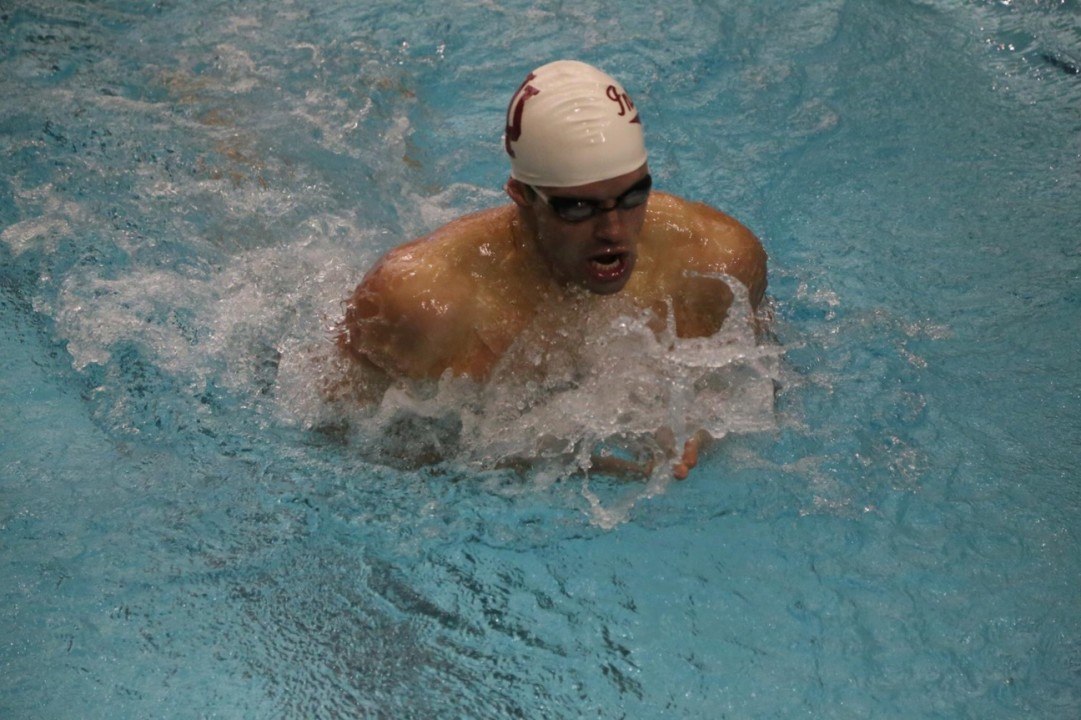 Although Michigan has had a firm grip on the top spot in the team standings at the Big Ten Championships... Archive photo via Indiana University Swimming & Diving

Notre Dame won its fifth-straight dual meet against the Boilermakers this past Friday, hosted at home at Rolfs Aquatic Center.

Drew Kistler from Spokane Waves has given a verbal commitment to the University of Minnesota for 2022-23.

Indiana’s Brendan Burns picked up two individual wins in the 200 fly and 200 back as the Hoosier men topped Northwestern.

Although Michigan has had a firm grip on the top spot in the team standings at the Big Ten Championships for several years now, the Indiana Hoosiers have always been every good at keeping other teams honest this time of the year. In fact, you would have to go back to 2010 to find an Indiana team that placed outside of the top 3 at the Big Ten Championships (5th that year), and the program has also put up massive points on the national stage as well. Our next senior is Tanner Kurz out of Hockessin, Delaware, and he will be one of many returning NCAA qualifiers for the Hoosiers who will be instrumental in igniting the very young IU team’s spirits in just a couple of days.

A phenomenal swimmer both in Delaware’s high school swimming scene and in the club swimming realm, Kurz owned an impressive list of records and titles to his name by the time he joined the Hoosiers for his freshman season. Competing for Delaware Military Academy, Kurz would establish five state records over the course of his career, including records in the 200 IM (1:47.60, 2012), 50 free (20.40, 2010), and the 100 breast (54.64, 2011) that all still stand today. He would also own seven individual school records and three relay records while swimming for DMA.

With his swims at the Conference Championships, Kurz would receive an opportunity to swim at the NCAA Championships the following month, and he would post individual finishes of 23rd in the 100 breast (53.80) and 23rd in the 200 breast (1:56.73). He would also help Indiana’s 200 medley relay take 14th (1:26.13) and 400 medley take 9th (3:10.59). Notably, both of those relays would help the then-freshman earn Honorable Mention All-American Honors in the process.

When the stakes are high and his team counts on him the most, Tanner Kurz has delivered time and time again for the Hoosiers. With only four seniors on IU’s roster entering the Big Ten Championships, Coach Ray Looze can rest assured that he will have a capable leader at the frontlines to help guide his underclassmen during Championship Season. Look for Kurz to be excellent as always in West Lafayette, and if all goes as planned, several more school records may tumble before the week is through.

School Major/Degree:  Human Biology
Favorite Event:  100 and 200 Breast
Favorite Hobby:  Hunting, fishing, crabbing, camping and being outdoors. But indoors I play guitar and sing.
Favorite Movie:  Kingdom of Heaven
Person You’d Like to Meet Growing Up:  Mark Spitz
Favorite Food/ Pre-Race Meal: Favorite food is a medium rare steak with a great rub on it but any dish including protein, carbs and lots of veggies is my favorite. I am not picky at all as long as I am fed I am happy. I don’t have a pre-race meal. Whatever is served I eat. I learned at home that beggars aren’t choosers you get what you get and if you don’t eat it quick enough your twin brother or dad will eat it first haha.

When I was very young (probably five years old) I was put into swim lesson all the way until I was seven when I joined the local summer pool. Here is where I got a semi taste to the world of competitive swimming. I made lots of friends at my summer pool called Three Little Bakers. I noticed my friends were faster than me and I didn’t know why they were because I thought swimming was just a fun summer activity but it turned out I was wrong. The fun lasted all year! I had to see this, so I followed my swim friends to my club, Delware Swim Team or DST, and I’ve swam with them ever since. I was shown the competitive year round swimming and have been hooked ever since then!

My favorite collegiate swimming memory… man I have so many and they are all great! I would have to pick IU’s Duel meet win against Auburn my junior year. I picked this memory because we were the expected underdogs, the ones who were supposed to lose with no contest to Auburn and we did quite the opposite. Everyone on the team from freshman to seniors all stepped up, swam lights out, and did their job in scoring points no matter how we felt or how hard we practiced that week. This was the starting point or when I really noticed our team culture of family and the idea we’ve got each other’s back no matter what happens, really take off. Now I am proud to say that our team bond has only grown and gotten stronger from that point on. We saw what we can do when we work together and we never have looked back!

As many of our readers know, the Hoosiers have a storied program, and we have seen them churn out some incredible talent over the past few years. To name a few, Cody Miller is one of the newest American Record holders on the men’s side and Eric Ress has put up some spectacular times in the backstroke and IM events both on the NCAA level and on the club level. In your personal opinion, what is special about swimming at Indiana, and why are the Hoosiers always a perennial powerhouse?

Two reasons I have found contributes to this. First is the brotherhood that is created here in Bloomington. Our team culture of family and always putting in 100% in everything we do in the water and in the weight room has helped us attract focused mined and motivated swimmers. We support each other through hard times and celebrate during great times but we are a team that always pushes forward wanting to make each other better every day. From this comes our highly competitive nature, I trained with the best competitors from Cody to Eric and I was always racing them while always wanting more opportunities to race the best at NCAA’s. These factors of a supportive family, expecting greatness out of ourselves every day, and our competitive nature has made our brotherhood strong and has led to our legacy as a top contender every year.

The second reason is that, here at Indiana, we don’t just develop you into a great swimmer but into a respectable man. This creed has been what all the swimmers past and present have gone through and is the tradition here at IU. The coaches and the team works with each swimmer individually into making them into a leader, how to take responsibility in life, how to make the best choices, how to treat others, how to be a professional in how we portray ourselves as a IU athletes and how to be independent in life for just a few examples. The Indiana program is dedicated in putting effort in developing the individuals from the ground up. I grew from a boy into the man I am today from all the lessons my teammates and coaches gave me. At Indiana we are not a number or points at Big Tens or NCAAs but a person. A person who is a developing man discovering who we are as we redefine our values and beliefs in life. So as men, we are stronger and have tighter bonds as a team, and this tight brotherhood contributes to our presence at NCAAs and at Big Tens. Here at IU, where everyone has a part to play, everyone matters and all can contribute to the team and IU.

Yes I feel very prepared and ready to end my senior year on a high note. The Hoosierland meet gave me a ton of confidence in reaching my end of season goals. I’ve never have been that fast midway through a season. I’ve always been an end of the season shave and taper fast swimmer usually putting up great times. But if I can get my best times or close this early, the sky’s the limit!

My mental state and physical state have been the strongest they’ve ever been! This is my senior year, everything is falling into place. I have nothing to lose and everything to gain. I am a dead man walking sort of speak, being a senior that is haha. So I am going to leave everything I have in the pool and just have a kick-ass time!

The greatest catalyst in my swimming career was my mind set. I didn’t make NCAAs and had a very poor performance at Big Tens my sophomore year. I was so angry and down on myself and just negative all around. It was a wakeup call and right then I decided that thinking like this is not productive. I need to be happy, optimistic about life, and make the best out of every situation I am in. Ever since then, all I’ve done is gotten better and have been happier with every passing day. Three things I live by from this experience: 1) be happy/optimistic in life no matter what, 2) face your fears and conquer them, and lastly 3) Always forgive and have forgiveness, leave no regrets and let go of the past it does not serve you in the future.

I will be going to Olympic Trials this summer and will be attending Chiropractic school in the spring of 2017.

What should we look forward to from Indiana as a whole at this year’s Big Ten Championships?

Look for exciting and inspiring swims. We are a young team but have a lot of talent. I say expect some fast swimming from the team as a whole. We are seen as an underdog falling a few spots at NCAA’s last year but by being an underdog we also have the element of surprise. And we will raise some heads this Championship Season, and since we are a young team, we will be back even stronger next year.

Congrats Tanner on a great career at IU. Loved watching you grow as a swimmer and as you say, as a man. Mad respect for you. Good luck in your future.