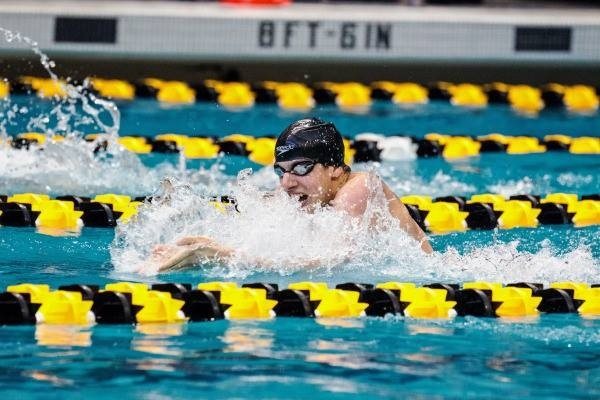 In 2010, the Ohio State Buckeyes stunned the rest of the conference when they upset Michigan to win the team... Archive photo via Ohio State University Swimming & Diving

In 2010, the Ohio State Buckeyes stunned the rest of the conference when they upset Michigan to win the team title at the Big Ten Championships. Since that year, the Buckeyes have been extremely consistent at the Conference Championships, recording top 3 finishes each and every year thanks to deep relays and incredible talent across all individual events. In 2016, the Buckeyes will look to senior DJ MacDonald out of Toledo, Ohio to lead the troops into battle, and his prowess in the breaststroke events could prove to be a significant catalyst in the Buckeyes’ efforts to stand atop the team standings at the end of the week.

Competing for St. Francis de Sales High School, MacDonald enjoyed considerable success in Ohio’s high school swimming scene. He would reach the championship final at the OHSAA State Championships four times, recording top individual finishes of 3rd in the 100 breast (55.81) and 4th in the 200 IM (1:51.01) as a senior. As a junior, he also provided the breaststroke leg (25.72) on his school’s State Championship winning 200 medley relay (1:32.69). Additionally, MacDonald’s efforts as a part of St. Francis de Sale’s state meet charge resulted in team runner-up finishes both in 2010 and 2011.

After getting a taste of scoring at the Conference Championships as a freshman, MacDonald would return for his sophomore season stronger than ever. Individually, he would post finishes of 11th in the 100 breast (53.43), 8th in the 200 breast (1:57.71, 1:56.98 in prelims), and 42nd in the 200 IM (1:49.98). For the second straight year, all three of MacDonald’s swims at the Big Ten Championships were lifetime bests, and both of his breaststroke swims were the fastest times on the season for any Buckeye. Additionally, he contributed a 52.78 breaststroke split on OSU’s 400 medley relay that would take 2nd overall in a 3:06.63, a new school record. The previous record had stood at a 3:07.68 from the 2011 Big Ten Championships.

Thanks to his team’s performance in the 400 medley relay at Big Tens, DJ would receive the opportunity to compete a the NCAA Championships for the first time in his career. Contributing the breaststroke leg on OSU’s 400 medley relay, he would help the team take 9th in prelims before the quartet suffered a DQ in finals.

With the ability to make jaw-dropping time drops each and every season that he has competed with the Buckeyes, DJ MacDonald will be brimming with confidence when the action commences tomorrow night at 6:30 PM. Already the fastest performer in school history in his signature 100 breast race, MacDonald has nothing to lose in West Lafayette this week, and his efforts will almost certainly serve as motivation for a very young Ohio State team. Look for MacDonald to bring the heat as soon as the 200 medley relay kicks off on Wednesday, and to keep swimming with a purpose all week long.

I first started swimming summer league when I was six and began swimming year-round when I was eight. My dad was a swimmer growing up and my older sister was already involved in the sport so I figured I would give it a try.

My favorite collegiate swimming memory is definitely swimming at the Big Ten Championship last year. As a team we swam really well at the meet and I think that atmosphere of the meet made it a really exciting meet.

Last summer, you got a taste of international swimming with your stint at the 2015 World University Games, and you had a tremendous meet overall. With a 4th place finish in the 100 breast and a 5th place in the 50 breast highlighting your individual finishes, can you describe what that meet was like for you, and also tell us how a meet like the World University Games compares to meets such as Big Tens and NCAAs?

This summer was my first time ever traveling out of the country so I was really excited to experience a different culture. Overall I think the meet gave me a lot of confidence and has helped me prepare for this upcoming championship season. I think the meet was actually very similar to Big Tens and NCAAs because you had to be ready every swim, there was no holding back in the prelims. I was a little nervous at first about swimming in a seven-day meet but after doing that it makes a four-day meet like Big Tens not seem so bad.

With each year that you’ve represented the Buckeyes, you’ve shown constant improvement across all your events. In the 100 Breast, you’ve managed to drop a second each year, and 2015 saw you set a new school record with your swim at the Conference Championships. What would you say has been the “secret” to your success on the NCAA stage, and do you feel like you’re in a good place with just a few days left until your final Conference Championships?

I think what’s helped me the most is just keeping a good mindset and not taking things too seriously. I trust that the work I put in will pay off in the end and I don’t let little things like one bad practice bother me. As for the Conference Championship coming up I think the team is in a great place and I’m really excited to see what everyone can go.

After this collegiate season I plan to swim till Trials and then hang up the goggles for good. In the Fall I will be pursuing my Masters Degree in Finance here at Ohio State and I am looking forward to that and moving on to the next stage in my life.

What should we look forward to from Ohio State as a whole at this year’s Big Ten Championships?

This year’s team is really young and I’m looking forward to seeing what some of our Freshman can do. I think we are going to bring a lot of energy to the meet and put up some fast times. Over the years the Big Ten has become one of the most competitive conferences in the country and I think this year’s team has a chance to really surprise a lot of people.