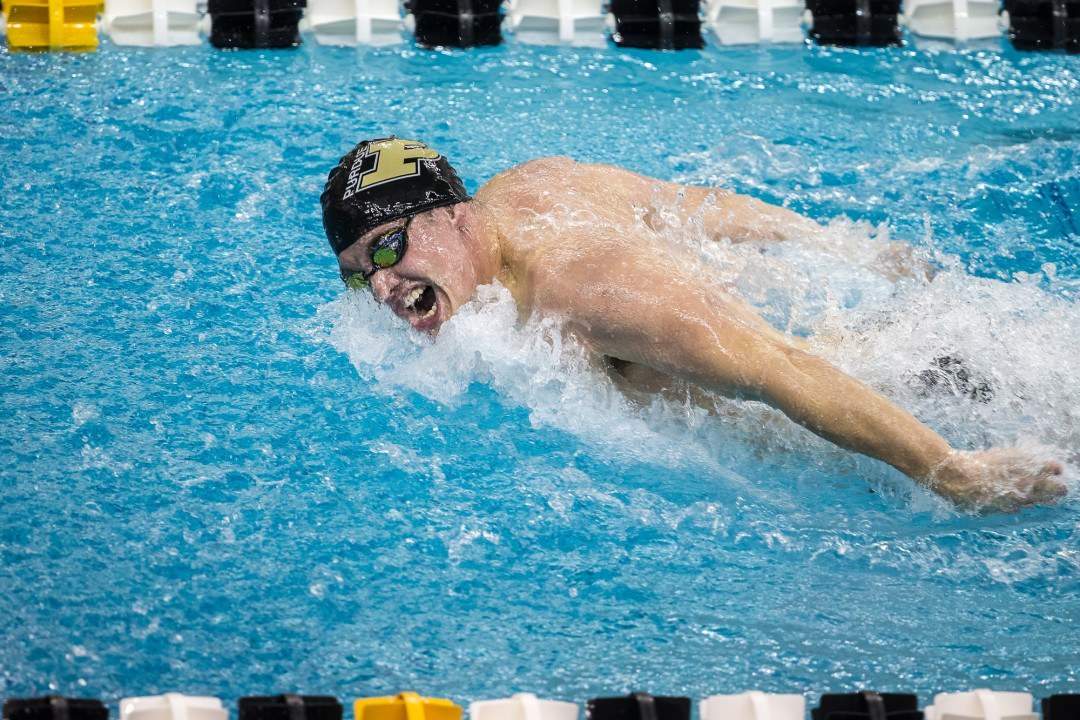 The Purdue Boilermakers enjoyed one of their best seasons in recent history last year at the Big Ten Championships with... Current photo via Purdue University Swimming & Diving

The Purdue Boilermakers enjoyed one of their best seasons in recent history last year at the Big Ten Championships with a 4th place finish overall in the team standings. Though Purdue would lose Big Ten Champion Lyam Dias and a number of senior divers to graduation following the completion of the 2014-15 season, the Boilermakers still have eight seniors on their roster for the 2015-16 season, a tremendous asset when it comes to team leadership. Next up in our series, we have Stephen Seliskar out of McLean, Virginia, and he will be an important component of Purdue’s scoring efforts when the Boilermakers play host to the rest of the conference this week at the 2016 Big Ten Championships.

The following month, Seliskar would receive the opportunity to race at the 2013 NCAA Championships as a member of Purdue’s 200 medley relay, becoming the first Purdue freshman to qualify for the meet since 2006. In Indianapolis, he would provide a 22.37 backstroke split to help the Boilermakers take 21st overall in a 1:27.50.

For the second time in his career, Seliskar would receive the opportunity to compete at the NCAA Championships. He would provide a 22.19 backstroke split to help Purdue take 22nd overall in the 200 medley relay (1:27.04).

With both his 100 back and 100 fly already under 49 seconds this season (48.21 and 48.96 respectively), Stephen Seliskar has positioned himself perfectly to make this week’s Big Tens his best one yet. Swimming in front of a home crowd and with a legion of youth behind him, this senior will have plenty of motivation to work with when the action kicks off tomorrow night. Look for Seliskar to be a commanding force on Purdue’s relays while also being in the hunt for as many scoring swims as possible this week.

I started swimming at age 7 with the Mclean Marlins, a summer league team part of the Northern Virginia Swim League. After making All-Stars in the 25 back my first year out, I began to train year-round with York Swim Club and eventually Nation’s Capital. While I took NVSL swimming lightly, I still competed and helped coach every summer through my freshmen year of college.

The 2015 Big Ten championship was an awesome meet for Purdue and me individually. I was honored to compete on the 200/400 Free and Medley relays that lead to Purdue finishing fourth overall. In the process, I set the school record in the 100 back leading off the 400 medley which was a memorable moment for me. Lyam Dias also won the 200 breast and the reaction from our team will forever be engraved in my mind.

You have competed at NCAAs twice now, both times as a member of the Boilermakers’ 200 medley relay. What was it like to make the meet as a freshman, and did you take anything away from that meet that helped you approach the meet when you returned as a Junior?

As a freshman, I was just happy to be able to compete at such a high level meet. I was able to take the month in between Big Tens and NCAAs to only focus on the 50 back which was fun and effective as I dropped 2 tenths. As a junior, I trained only for the 50 again and even though I didn’t drop time from Big Tens, the experience of competing at the highest short course level will remain with me. I am looking to qualify individually in the 100 backstroke this year and hopefully compete on a few relays as well.

Your younger brother, Andrew, is a swimmer who our readers are very familiar with, and his rapid ascent to the upper echelons of the club swimming world has been closely followed by many. Can you describe what kind of relationship you have with your brother when it comes to swimming specifically, and do you feel like swimming has helped better connect the two of you as siblings?

Growing up, Andrew and I were “pool rats” every summer. We’d ride our bikes to the pool and spend hours goofing around. We loved being around the water and that love turned into dedication when we began to train under Marilyn Mangles and John Flanagan with NCAP. I can remember grinding out 40 100s best average alongside Andrew, but I remember the car rides to and from the pool even better. It was awesome having my best friend to jam out and chat with along for the ride with me. We went to high school 40 minutes (on a good Beltway traffic day) away from where we trained so you can imagine we spent some time driving, but that time was often a highlight of my day. Andrew pushed me to be the best that I could and while he probably didn’t need me to push him, I tried to give him any and every insight I could to help him become the man he is today.

My Grandfather, John Seliskar, followed my swimming religiously and even towards the end of his life came to most of my meets. He’d always know my times and potential cuts despite not being a swimmer himself. In high school, before I got my license, he’d pick me up and drive me to practice often bringing me a snack and drink. Having someone that cared about my success in the pool and development as a student-athlete was a blessing.

I plan to stay and train with Purdue through Olympic Trials before concluding my competitive swimming career.

What should we look forward to from Purdue as a whole at this year’s Big Ten Championships?

Purdue will battle. Every guy on this year’s team is confident and ready to compete. I expect to see many top 16 performances, especially from several underclassmen (both swimming and diving) that will surprise people.

Congrats to Stephen on an outstanding career! Great to see such a fine young man experiencing such tremendous success. Side note: for all Andrew’s success, he never broke Stephen’s Thomas Jefferson 100 back record!