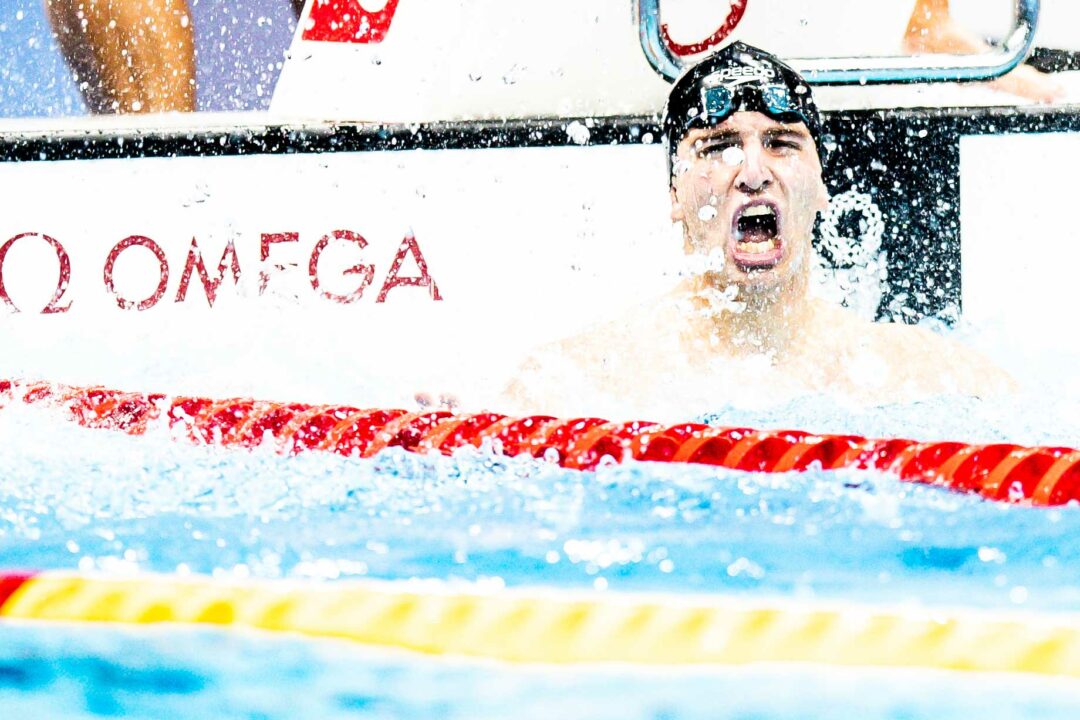 Zach Apple breaks down his entire swimming career, from his college whirlwind with three schools to his Olympics highs and lows (and yes, that relay). Archive photo via Jack Spitser/Spitser Photography

Zach Apple knows what you said about him following the Olympic 4×200 relay.

He said he remembers seeing countless DMs, including one that told him not to come back to the United States, after he swam the third leg in the 800 free relay in 1:47.31, the slowest split of the group.

That race marked the first time the U.S. men didn’t earn a medal in a relay in a non-boycotted Olympics, as the men finished fourth.

Apple would later call the race a “learning moment,” and he responded to the DMs saying he’d do better next time. As the world enters a year with relatively few international events for Apple to make his comeback, SwimSwam sat down with the Team Speedo member to go over his setbacks, his triumphs, and more.

“There was more I wanted”

Apple’s journey doesn’t follow a typical trajectory–he said he didn’t truly start swimming until he was 16, and that delayed start didn’t make him a “star recruit” for colleges. Apple, 24, is from Trenton, Ohio, and kept his eyes set, for the most part, on mid-major schools near him.

“When I was [visiting] at Western Kentucky, that’s when Claire Donahue was still there,” Apple said. “She was still training there and on my trip she brought her [2012 London] gold medal in, and that was a cool moment to have. I was like, ‘Alright, they know what they’re doing. They have an Olympian, currently, and it felt like that was the place I was going to do it.”

Only it was not to be.

In April 2015, Western Kentucky announced its swim and dive programs would be suspended for five years in response to hazing allegations. Apple said he learned the news in a commit group chat, and that he had to re-do the entire recruiting process in just four weeks.

During the summer after his freshman year, Apple recalled a key moment that helped him decide he wanted to pursue swimming more seriously. He was sitting in the stands during the 2016 Olympic Trials, listening to the announcement of the Olympic team.

“That was a defining moment for me, sitting in the stands, watching the team get named,” Apple said. “There was more I wanted out of the experience. I didn’t just want to sit in the stands, I wanted to be on the team.”

And then, for the second time in his college career, Apple’s team came grounding to a halt. Auburn head coach Brett Hawke resigned as Auburn’s head coach in 2018, yet Apple didn’t initially plan to leave.

“That was my team, those were my guys,” Apple said.

But when the strength and conditioning coach told him he had the potential to succeed on the international stage and had to find a new program to do that, Apple made the choice to transfer to Indiana, saying it was a long-term decision for his post-collegiate career.

He said that at Indiana, he transitioned from pure sprint training to a little more volume, something he wasn’t used to, but his strengths included having blind faith in his coaches, including Indiana associate head coach Mike Westphal (the fall after Apple’s departure, Indiana would go on to fire Westphal after he was arrested on intimidation charges).

“Back in the day, I didn’t really ask questions, I did what the coaches told me to and I did it to a T,” Apple said. “I just grind it out with the team and with Mike, and it was a transition, but it was one that paid off and has worked out well.”

In his final season, Apple tied for 5th in the 50 free at NCAAs, 3rd in the 100 free, and 2nd in the 200 free. He also participated in a number of Hoosier relays, including the winning 400 medley relay.

“But it’s where all the accolades come from–the big pool,” Apple said. “It’s where all the fame and notoriety comes along, and the big accomplishments. It’s definitely something I wanted to be good at and something that I always focused on.”

Apple had his first experience with the international scene during the 2017 World Championships, which he said is his Speedo Make Waves moment.

“I was a deer in the headlights, but it was on this bigger stage with all the big names,” Apple said. “I can remember just trying to sit as many meals as I could with Nathan [Adrian], just trying to soak up any knowledge I could pick out that he would accidentally let slip out.

At the 2019 World Championships, Apple ultimately earned two golds, one silver, and one bronze. But while there, he said the coaches had to decide between him or Nathan Adrian for the anchor leg of the 4×100 medley relay. Ultimately, the staff decided to go with Adrian for finals. The team ultimately finished 2nd after being out-touched by Great Britain.

“I feel way more nervous when I’m in the stands than when I’m behind the blocks, because I have no control,” Apple said. “It’s such a helpless feeling watching the race from the stands, especially one that kind of affects me as a prelims swimmer on the relay. But yeah, obviously a bummer. “

Apple emphasized that no one swimmer was to blame for the loss. He added that after the race, whenever he faced a particularly tough moment in training, he would remember that relay and use it for extra motivation.

“I let myself ride that high”

Just as Apple was hitting his stride, the Olympics were postponed a year due to the COVID-19 pandemic. The pandemic ended up being a “breath of fresh air” for Apple, though, because he said he had been feeling burned out and was having trouble finding pool space to train.

“I wasn’t really loving going to practice–I was excited for the summer, but the day-to-day was killing me,” Apple said. “When they told us it was getting postponed, I was kind of like, ‘I’m just taking some time, I’m not swimming.’ I actually really enjoyed that time, it was kind of needed.”

Fast forward a year, and Apple’s on his way to the Games. His iconic moment came early on, when he anchored the 4×100 free relay, splitting 46.69, faster than anyone else on the American team, and the second-fastest out of everyone behind Kyle Chalmers.

“It was awesome,” Apple said. “It’s this moment that you dream of, you’ve put in all these hours, all these years of work, and to have that come to fruition in this one moment is pretty surreal.”

It was a breakthrough moment for Apple, and he said the next 36 hours were an incredible high. However, the Olympics wouldn’t be all rainbows and sunshine for the swimmer, thanks to the 4×200 free relay.

Prior to the race, the staff talked with Apple, saying that he was still on the relay, despite his less-than-perfect individual races. Apple credits that conversation and his teammates’ support for helping him recover.

Apple was chosen to swim the third leg of the relay, and he split 1:47.31. As a whole, the team finished 4th. Apple received a lot of backlash for his leg in particular, but he said he learned from the experience and how draining the Olympics can be.

“I was just so shot emotionally and mentally, which in turn kills you physically, from that high I let myself ride for 36, 48 hours after the relay,” Apple said.

He did, however, get redemption, anchoring the 4×100 medley relay. The team broke the suited World Record in the event to win gold in a race that became one of SwimSwam’s top 10 swims of the year. Apple out-split Duncan Scott, swimming 46.95 to Scott’s 47.08.

After the Olympics, Apple competed as a member of the DC Trident in the International Swimming League. In addition, he participated in a lot of post-Olympic events, like throwing the first pitch at a Cincinnati Reds game.

Apple said that not taking a post-Olympic break took a toll on him, and ultimately led him to opt out of ISL Finals in Eindhoven. He said that if he could do it over again, he would’ve taken a break.

“I go to ISL, and I live in a hotel again for six weeks,” Apple said. “I was so fried, and I made a decision for myself that I needed to spend time not traveling.”

Apple said, however, that what’s done is done, and even though his performance at SC Worlds wasn’t what he hoped it would be, he will still be at major meets in the future and he’s continuing to “try and be good at swimming.”

Thanks to Speedo, a SwimSwam partner, for support the Team Speedo Series.

I must have missed when the 4×200 medley was swum!

Apple mentioned lightening the yardage quite a bit coming into Olympic Trials (focusing on the sprints) and being a bit surprised by his good 200 performance there. Maybe his 200 conditioning fell off faster than expected during the second taper? Trying to think about lessons for next time around, beyond “conserve emotional energy during the Olympics”…

Sorry…should’ve pressed on that nugget….. Thinking it through, he’s been conditioned for years at an elite level. I do “think” he over-swam the first 100m. I do think he had a solid 2-free leg in the chamber…. HOWEVER, the pandemic stuck a pin in conditioning. That interrupted it, and with a OT taper, then an OG taper, real conditioning ended in May for him. That’s a long time…and 2-free is extremely painful….

I almost can’t believe it’s already been SEVEN years since WKY “suspended” their swim team! I am not remotely surprised that the 5-yr suspension became permanent.

nothing so permanent as a temporary solution

Yeah, ask our politicians for more info on that