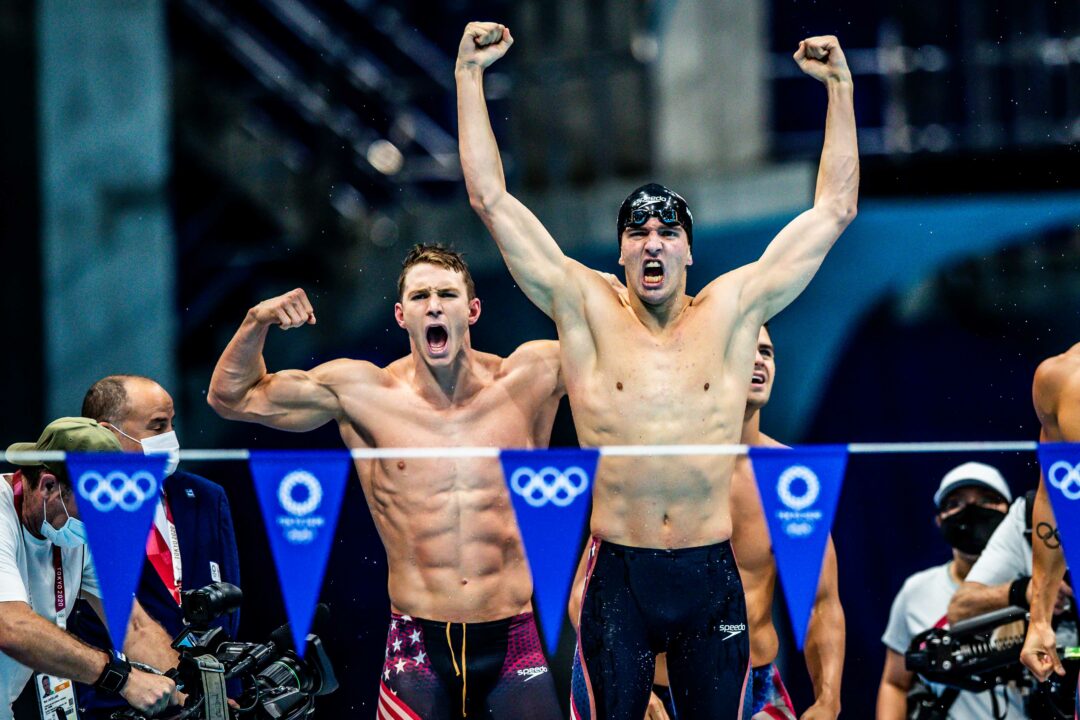 Thanks for coming by, Zach! 🤩 pic.twitter.com/s9NuRDzNlQ

Apple, an Ohio native, recently returned from the Tokyo Olympic Games, where he won his golds as the anchor of both the men’s 4×100 freestyle and medley relays. The latter set a world record.

He joins a long line of American Olympians who have thrown at first pitches at MLB Games. Among them are Katie Ledecky, Michael Phelps, Ryan Murphy, Conor Dwyer, Cullen Jones, Kelsi Dahlia and Connor Jaeger.

Apple was born in Trenton, Ohio, and attended Edgewood High School. He played multiple sports, including baseball, before getting serious about swimming; his club swim team was the GMVY Wahoos. He went to Auburn for his first three years of college, later transferring to Indiana University for his senior year in 2018-19.

He’s been a mainstay of American relays since 2017, when he won his first world title as a prelims swimmer for the 4×100 free relay. Since then, Apple has picked up four more World Championships medals — including two gold — and won five golds at the 2019 World University Games.

Apple also competed individually in the 100 free in Tokyo, advancing to the semifinals but missing out on the final, and swam third on the fourth-place 4×200 freestyle relay. He’s expected to return to competition for the DC Trident in the upcoming International Swimming League season.

Yes. I’m a White Sox fan, but the Reds faithful were not happy…

Sox can coast into playoffs

He threw a 98 mph fastball and was immediately signed.

I was there and he not only brought the heat, it was a perfect strike, too!

Coaching error. He swam the time that his 5th place at Trials would indicate he would swim.

He swam a full second slower than his trials swim. He went out like an inexperienced age grouper. That’s on him forever. His teammates paid the price.

I’d say it’s the fault of the coaches who swam the 5th qualifier in the finals without him having another in competition swim since Trials and having a 100 semi earlier in the night. Zach gave all he could…the coaches shouldn’t have put him in that position.

Ok, I’m sure you’ll bring your 2 gold medals and do a better job next time…

Good god, move on. Why do you have to bring that up in a space that is celebrating the guy, and deservedly so? Smfh

Zach Apple is the reason that relay is the first in history of American swimming to not medal. Period.

I should have received credit for breaking this story. I went over to the game and there was Zach!