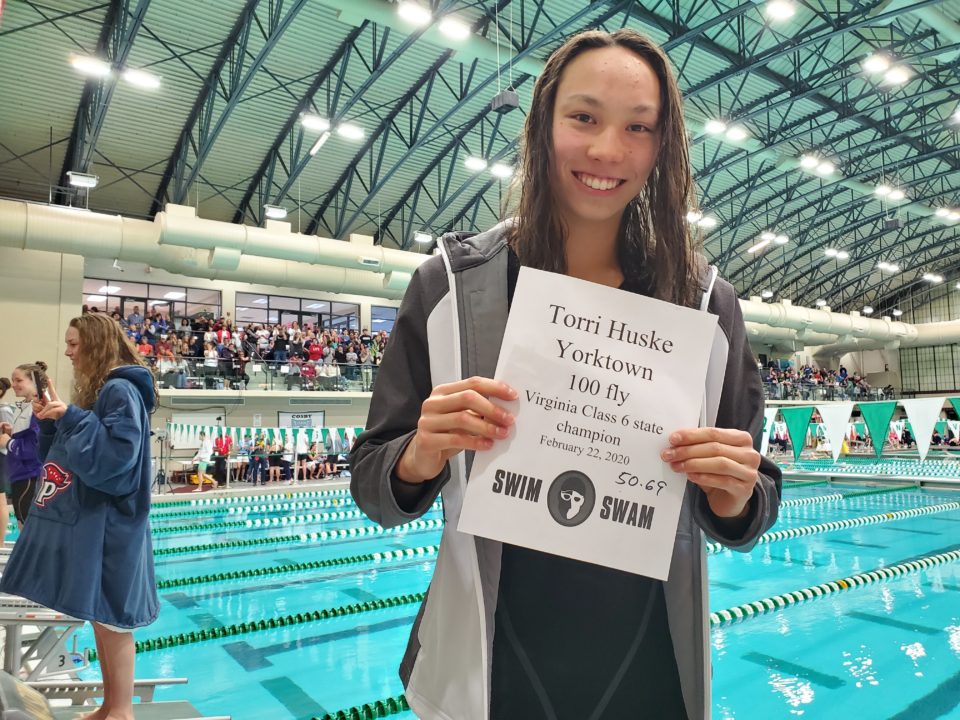 Torri Huske, a junior at Yorktown High School, lowered the National Public School Record in the 100 fly to 50.69 on Saturday at the VHSL Class 6 State Meet. Current photo via Matthew Rees

Torri Huske, a junior at Yorktown High School in Arlington, Virginia, lowered the National Public High School Record in the 100 fly on Saturday. Swimming at the 2020 VHSL Class 6 State Swim & Dive Championships, she clocked a 50.69 in finals to win the event by more than 4 seconds. That performance lowered her own Virginia 6A, all-time Virginia High School, and National Public High School records which she had set last February with 51.29. Huske also won the 50 free, breaking her own 6A and all-time Virginia state records of 21.95 with 21.83.

Most of Huske’s improvement came on the second half of the race, where she was nearly half a second faster than she had been last year:

The overall National High School Record still belongs to Claire Curzan, who established the mark with 50.35 at the 2020 North Carolina 4A State Championships.

Congrats to Torri Huske. If she’s not eaten by the pressure of trials I think she can make the team. The women’s 100 fly will be a very open event between her, Dahlia, Kendall, McLaughlin, Curzan, Tetzloff, Nordmann, Douglass, Bray….. Regan Smith could make top 2 but I doubt she’s interested. All for the 100 back. The big question is Brown as her 100 fly in LCM is so far not at all at the same level as it is in SCY.

Stewart is in the mix as well