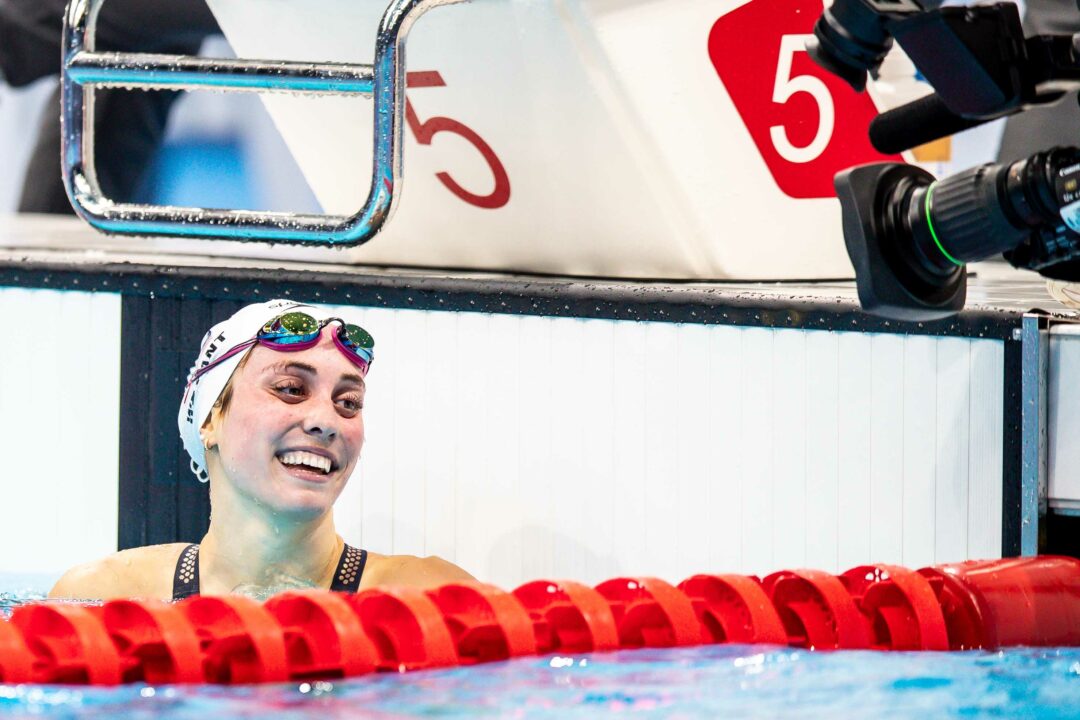 Leading the first Olympic final of Tokyo 2020 are Australia’s Brendon Smith and New Zealand’s Lewis Clareburt, who both swam under the former Oceanian record before Smith claimed it for the time being. The entirety of the top six swimmers in this final, including Smith (4:09.27) and Clareburt (4:09.49), are all sub-4:10.

Rio Olympic runner-up Chase Kalisz of the USA will be seeded next to top seed Smith while Hungarian veteran David Verraszto will be swimming to the right of Clareburt. Sub-4:10 Italian Alberto Razzetti and back-half speedster American Jay Litherland will sandwich the quartet, all equal threats to making the podium.

French teen Leon Marchand and Brit Max Litchfield both snuck into the final at 4:10.09/4:10.20, making it the fastest Olympic men’s 400 IM final qualification time in history.

Into the second semifinal, the Asian/Chinese record-holder Zhang Yufei will be sandwiched between the 2019 World champion, Canada’s Maggie MacNeil, and the reigning Olympic champion, Sweden’s Sarah Sjostrom. Belarusian teen sprinter Anastasiya Shkurdai is slated to compete next to Sjostrom in this heat at 56.99 to Sjostrom’s 56.18 evening effort.

Germany’s Henning Mühlleitner came in hot in the evening with a monster lifetime best of 3:43.67 to grab lane four in the men’s 400 free Olympic final. Next to him will be Austrian record-holder Felix Auboeck, who also went sub-3:44 at 3:43.91. Italian Gabriele Detti was the only other swimmer under 3:45 in prelims at 3:44.67.

Seeded outside of those three lanes are Aussies Elijah Winnington and Jack McLoughlin, both swimming identical evening efforts of 3:45.20. Winnington and McLoughlin currently remain No. 1 and No. 2 on the 2020-2021 world rankings with their respective Australian Olympic Trials swims of 3:42.65 and 3:43.27, both faster than Mühlleitner’s and Auboeck’s newly-minted lifetime bests.

19-year-old American Emma Weyant humbly holds the top women’s 400 IM finals seed at a lifetime best of 4:33.55, chopping three-tenths from her U.S. Olympic Trials winning time of 4:33.81. The American women have stayed on the 400 IM podium since the 2004 Olympics, including three runner-up swims. She will be seeded next to Britain’s Aimee Willmott, who placed five spots higher in Tokyo 2020 prelims than in Rio 2016 prelims at 4:35.28.

European breaststroke stars James Wilby of Great Britain, Arno Kamminga of the Netherlands, and Nicolo Martinenghi of Italy will headline the first of two men’s 100 breast semi-finals. South American record-holder Felipe Lima of Brazil will also participate in this heat as well as SCM world record-holder Kirill Prigoda of Russia.

In the second semi-final, world record-holder Adam Peaty of Great Britain and American record-holder Michael Andrew will swim in the middle lanes. Fellow American Andrew Wilson will also compete for a finals spot next to MA as well as China’s Yan Zibei and European breaststroke threats Ilya Shymanovich of Belarus and Anton Chupkov of Russia.

The Australian women will be hunting for their third-consecutive Olympic title in the 4×100 free relay final out of lane four. Next to the Oceanian powerhouse are the Dutch women, seeded roughly two seconds behind Australia but two-tenths off of Canada, who made the 2016 podium behind Australia and the USA. Next to the Netherlands will be Great Britain, seeded a half-second behind the Dutch relay.

Meanwhile, the American women will be swimming to better their 5th-place prelims qualifying time and remain on the 4×100 free relay podium since 1984. The USA relay will swim in between Canada’s and Denmark’s relays in lane two.

does anyone know what channel i can watch the olympics and hear rowdy gaines? i’ve been watching the olympics but with different announcers. i just want to hear rowdy!!

USA white warm-ups along with the masks make them look like hospital workers.

My favorite race of the night, Hafnoui winning the gold.

Gold for Tunisia – love it

Another surprise in the 400 free (after the German’s heat swim). Good Job Jack!!

German seems to swimming without batteries.

any usa doubters out there?