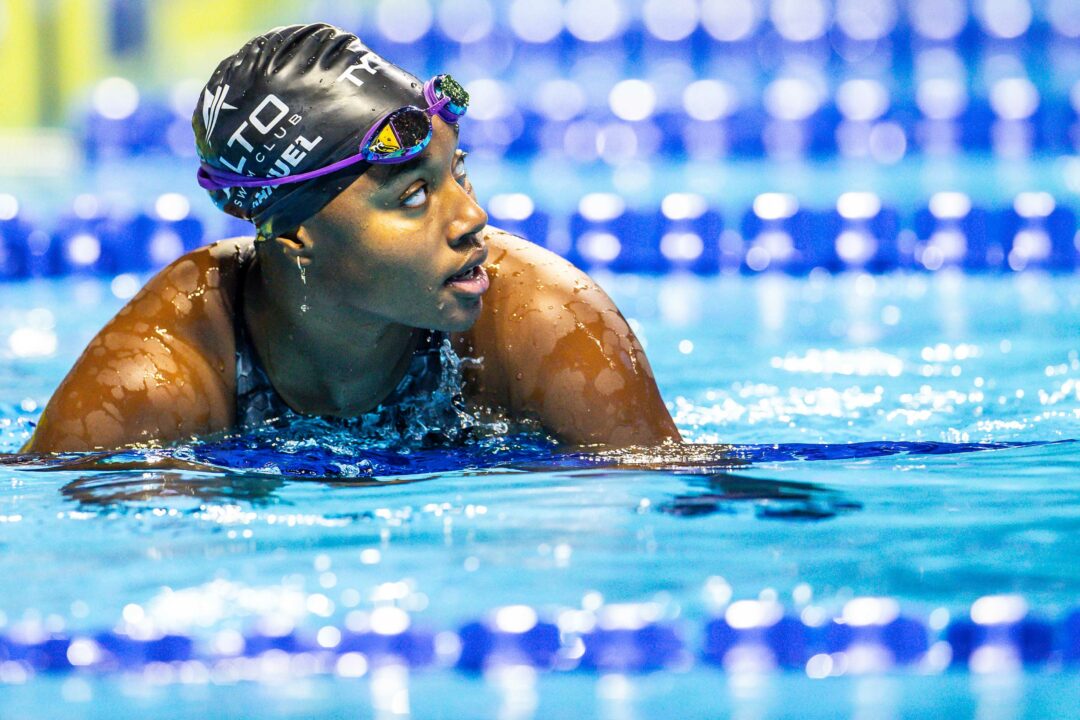 Despite finishing ninth in the 100 free at the U.S. Olympic Trials, Simone Manuel will anchor the women's 400 free relay in the Olympic final. Archive photo via Jack Spitser/Spitser Photography

Simone Manuel will anchor the United States in this morning’s women’s 400 freestyle relay final, a potential move that’s been a hot topic of late coming to fruition after Manuel failed to advance to the 100 free final at the U.S. Olympic Trials.

The U.S. brings in the top-two finishers from Trials in Erika Brown and Abbey Weitzeil, who will go 1-2 on the relay, and then Natalie Hinds will be the only remaining member of the prelim team after recording the top split in 53.28.

Manuel is the reigning Olympic and two-time world champion in the individual 100 free, but after being diagnosed with overtraining syndrome earlier in the year, only mustered a ninth-place finish in Omaha in a time of 54.17—over two seconds off her personal best (52.04).

It’s worth noting that the head coach of the American women’s team is Greg Meehan, who also coaches Manuel at Stanford.

Catie Deloof, who split 53.42 on the prelim relay, gets left off for finals, as does Katie Ledecky and Torri Huske, who were outside shots to get the nod if the Americans were looking to really shake things up.

Other key changes include the Australians opting for Bronte Campbell (52.82 relay split) over Mollie O’Callaghan (53.08 lead-off) from the prelim relay, while Meg Harris stays and Emma McKeon and Cate Campbell come in. McKeon and Campbell will back-end the relay, and rank first and second in the world this year in the individual event, respectively.

The Canadians will bring in Maggie MacNeil in place of Taylor Ruck after Ruck split 54.16 this morning. MacNeil had a solid 100 fly prelim swim, and owns a flat-start best of 54.02.

The Dutch have brought in Kira Toussaint for Marritt Steenbergen, and the Chinese have not altered their lineup from the heats, opting to leave off Zhang Yufei and Yang Junxuan.

Sarah Sjostrom will get a second crack at a flat-start time as Sweden’s lead-off swimmer, coming off a strong 52.95 in the prelims. The same goes for Denmark’s Pernille Blume, who was 53.15 going first in the heats.

The Swedes have also switched up their fourth swimmer, adding breaststroker Sophie Hansson for Sara Junevik, who split 55.86 in the prelims.

The British team swam the same order in the prelims as they did in winning the European Championships in May, setting National Records in both, but have switched things up here. Anna Hopkin will now lead-off, with Abbie Wood moving from third to second and Lucy Hope now going third instead of first. Freya Anderson remains in the anchor position.

What a shame. Why not put the fastest swimmers on the relay. Woke gets you nothing.

CHINA??? Wow, I thought they looked strong for the podium. Don’t understand not going with their best lineup.

USA and China both are not swimming their best relays – It must be China’s influence over America which led the USA to choose poorly.

Ya I am holding out for a Bronze – if Hope can get down into the 53s I am optimistic for our chances!

Abbie Wood going 53.5 in heats was huge. Anderson and Hopkin are the aces but if Hope and Wood can go 53 mid our teams chances will be strong.

Wow very interesting move. If there’s one thing i’ve learned its not to bet against Simone in a major final

I think everybody needs to relax it’s just a semifinal so we’ll be able to test out the relay before finals. Xoxoxo hit me with those dvotes if you agree!!!

Bizarre decision by China. Who leaves two 52 second splits on the bench for two 54 second splits? Yufei can make the 100 fly final easily. There goes a medal.