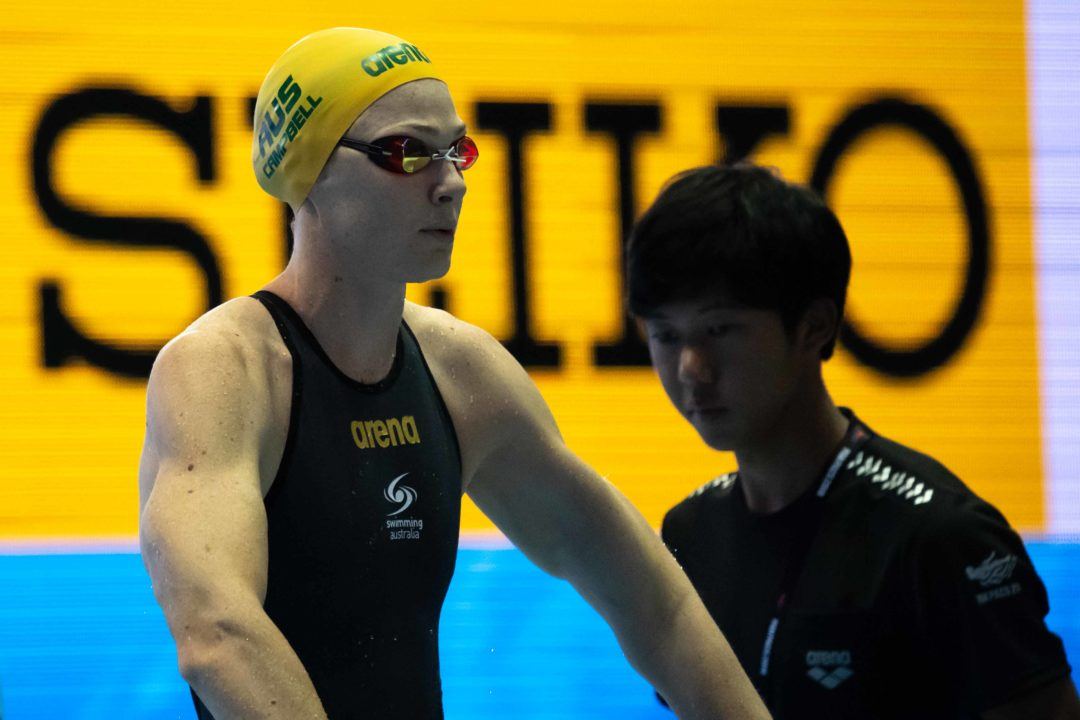 Australia has dominated this relay recently, setting world records in 2014, 2016 and 2018. But 2021 might be their best roster yet. Archive photo via Mike Lewis/Ola Vista Photography

The women’s 4×100 free relay is the first relay in the Olympic program, taking place right away on day 1. That’s going to create plenty of uncertainty, with teams still guessing at who is swimming well and who is struggling to maintain a taper. Still, Australia’s dominance doesn’t leave a lot of uncertainty as to who should win gold. The minor medals, though, are wide open.

Since taking nearly a full second off a super-suited world record in 2014, Australia has been next to unbeatable in this event, winning the two most recent Olympic golds, the most recent World Championships gold, and setting two more world records in 2016 and 2018.

What’s most impressive is that their 2021 roster might be the best one yet for this relay.

In terms of flat-start best times for the 2020-2021 season, Australia has the top three times in the entire world. Emma McKeon leads the way, with former world record-holder Cate Campbell second and Madi Wilson third. Meg Harris, the presumptive slowest leg on the team, would be the fastest swimmer for any other nation besides Canada and China in season-bests.

Of the remaining teams, 2019 Worlds bronze medalists Canada may have the highest ceiling. Penny Oleksiak ranks #4 in the world this year (and #1 among non-Australians). Taylor Ruck didn’t swim great at Canadian Trials, but also didn’t have to, as she was pre-qualified for the Olympic team. If she can return to 52-low form, Canada has two top-tier bookends.

Maggie MacNeil should be on this relay… but she also has semifinals of her all-important 100 fly in the same session. That will leave Canada with a choice between MacNeil, Kayla Sanchez and Rebecca Smith, who is a relay-only entrant in all three women’s relays and will have to swim at least one of them at some point between prelims and finals.

The Dutch were fourth in this relay at 2019 Worlds, and came within a tenth of the European title in May. Like Canada, they’ve got two top-notch bookends: Ranomi Kromowidjojo has already been 53-low from a flat start this year, and Femke Heemskerk anchored this relay in 51.9 and a medley relay in 51.7 at Euros.

The splits from Marrit Steenbergen and Kira Toussaint above come from prelims at Euros. They lost to Great Britain by a tenth with both women swimming slightly slower in the final. Kim Busch could be another option based on her 54.2 flat start time.

The big question mark for Team USA is if reigning Olympic champ Simone Manuel will get a swim on this relay after missing the Olympic team. It wouldn’t be shocking to see the team give her a shot in prelims – but there’s also a case to be made for keeping her event load light and letting her focus on the 50 free later in the week.

Even if Manuel mostly returns to some form, another 51-high might be too big an ask for Team USA, which will need its depth to step up in a big way. Abbey Weitzeil is the only returning leg of their 2019 Worlds silver medal-winning relay, where she split 52.6. Erika Brown, Olivia Smoliga, and Natalie Hinds are basically in a dead heat for relay spots if Manuel is in the mix. Both Hinds and Smoliga have their flat start times listed above, as there’s not a good recent relay result for them.

With relay-only Catie DeLoof required to swim at least once, the U.S. coaches will really have to strategize out their options for getting DeLoof a prelims swim and potentially giving Manuel a go, while also making figuring out which of Brown, Smoliga, and Hinds should make the finals relay – all without accidentally missing the top 8.

We used their order from the European Championships, with Lucy Hope leading off. Wood split 53.9 at that meet, a fair bit faster than her flat-start season-best.

China was fifth at 2019 Worlds. But they should add 16-year-old Cheng Yujie to that lineup after she went 53.76 from a flat start earlier this year. Zhang Yufei is the key piece on the relay, but will probably double with the 100 fly semifinals in the same session.

Zhu Menghui has split 53.3 on several occasions, but China has the depth to swim an off-lineup in prelims and figure out which of Zhu, Cheng, Wu Qingfeng and Yang Junxuan should join Zhang on the finals relay.

Right behind France, Denmark broke a national record in 3:36.81, with Signe Bro leading off in 53.73. If Pernille Blume can return to anywhere near her career-best 52.6, they’ve got a shot to join that medal-contending field.

Sweden‘s hopes ride on world record-holder Sarah Sjostrom and how she’s recovering from elbow surgery. The blessing in disguise to Sjostrom’s broken elbow might be that the longtime butterfly superstar can finally focus on relays instead of extending her energy across a busy fly/free individual event lineup.

Similarly, Japan has a solid shot to make the final if Rikako Ikee is back to form after beating leukemia. They made the Worlds final in 2019 without Ikee, and the last time she was on this relay, they beat China by two-tenths to win the Asian Games gold with Ikee leading off in 53.60.

The most I could do was bet $1 on Canada. (And I’d win $20, so not that bad!) Australia could get a 54.mid leg from someone and still potentially win, this seems as high as a “barring DQ” event win as anything on the schedule.

Not y’all leaving Sweden out of the finals again LMAO what is this?

I watched Taylor Ruck swim freestyle at their trials and she was way way off.

She swam 52 splits when they won medals.

She will be lucky to break 54. Big dent in Canada’s hopes.

Sad for Taylor but something has gone wrong.

GB beat Netherlands at Europeans with Anna Hopkin swimming a full second slower than she did later at the same meet and Freya Anderson not on form. Toussaint or Busch are a very weak leg.

Do you guys think it’s safe to throw both Aussie women free relays in a parlay? Seems like free money. They are -550 in the 4×200 free relay and -2000 in the 4×100 free relay. They only thing that I can think of to mess it up would be a DQ or the Aussie team getting Covid. I think the risk is small enough.

If only Gastaldello could find back her ISL form.
Wattel has a sub 53 in her.
With Bonnet plus Martin or Touati maybe a 7th or 8th place.

I’ve talked above about the need for US swimming of building the future for Paris and LA. They must put their eggs on Gretchen Walsh, Torri Huske and Claire Curzan for Paris. As long as the schedule stays the same there will always be conflict between the women’s 100 fly semifinals and the 4X100 free relay final and it’s a negative point for both Curzan and Huske. But I think both have a great 100 free potential. Especially Torri Huske. I’ve talked about the poor technique of most US girls in sprint freestyle compared to Aussies for example but I don’t put Torri Huske in that category. But of course it’s hard to focus on both strokes at the same… Read more »

Australia really shouldn’t lose this. Basically, there’s more top level 100 freestylers in Australia than there is outside of Australia. They’d probably beat a rest of the world composite team. So it doesn’t matter if Ruck and Oleksiak re-discover their form, or what mixture of Manuel and teenage butterfliers the US juggles together – there’s no avoiding the fundamental problem that they’re simply not fast enough.

Beyond this, China are being underrated in terms of their chances for a medal.