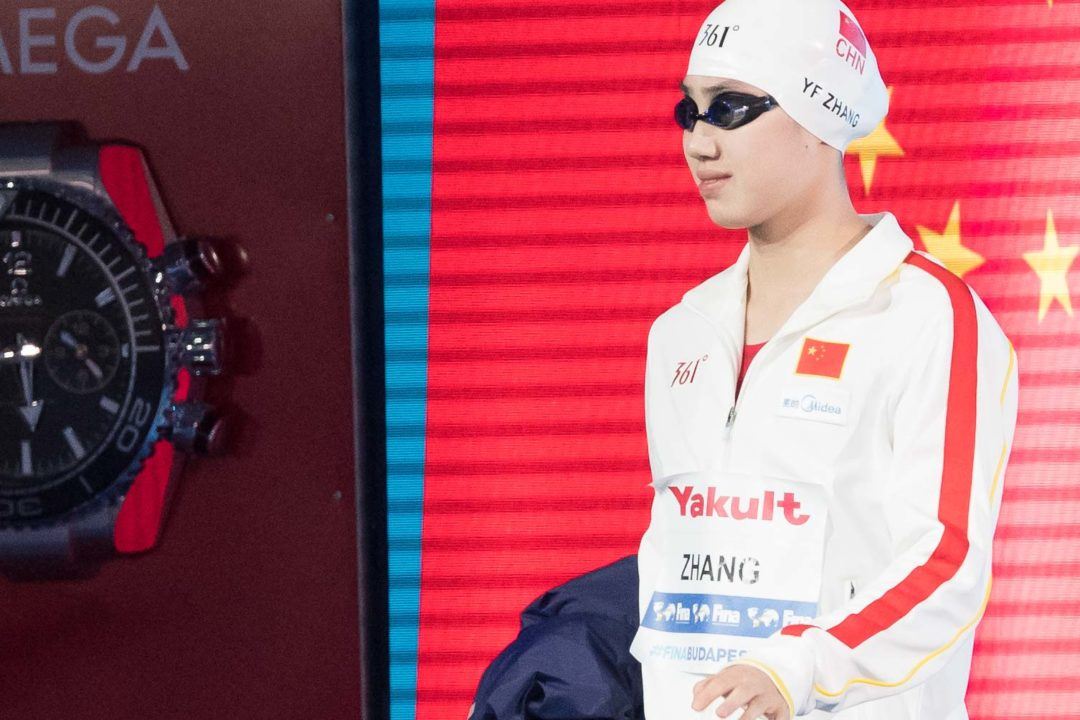 China's Yufei holds the fastest women's 200m fly time in the world this season by .41. She and #2 Flickinger made the 2016 Olympic final but did not medal. Archive photo via Mike Lewis/Ola Vista Photography

China’s Zhang Yufei leads the charge in the women’s 200 fly heading into the Tokyo 2020 Olympic Games. She posted a 2:05.44 at the first Chinese Olympic Trials, the top time in the world this year.

This time is nearly 2 seconds faster than the time that earned her 6th at the Rio Olympics.

Sprint free and fly specialist Zhang has been on fire in this event this season. She broke 2:06.00 for the first time in January and crushed that lifetime best at the Chinese Olympic Trials in May.

Team USA’s Hali Flickinger is the only other woman to crack 2:06.00 in the event this season. She posted a lifetime best time of 2:05.85 at the U.S. Olympic Trials, also nearly 2 seconds faster than the time she posted in the 2016 Olympic final.

She placed 7th in the event in Rio.

2019 World Champion Boglarka Kapas of Hungary swam a lifetime best 2:06.50 at the 2021 European Championships to win gold. This time ranks her 3rd in the event in the world this season.

The 200 fly was a new focus for Kapas in 2018, as she competed in distance freestyle at the last three Olympic Games.

She won gold at the European Championships in the event and expressed her love for the 200 fly in her post-race interview, calling it “short” compared to her usual specialty event. This will be her first time racing the event on an Olympic stage.

Keep your eye on Great Britain’s Laura Stephens, though. 21-year-old Stephens posted a lifetime best 200 fly time of 2:07.04 in June to become the 4th all-time fastest British performer. This ranks her 7th in the world this season.

2016 Olympic Champion Mireia Belmonte of Spain recently dropped out of the European Championships in May to avoid “taking steps back” in her shoulder recovery according to EFE.

Belmonte has qualified for the Tokyo Games in the 800 free and 1500 free. She could still add the 400 IM or 200 fly to her event lineup, pending approval from the Royal Spanish Swimming Federation (RFEN) selectors.

The top two fastest 200 fly times since Rio are from the 2017 World Championships where Belmonte won gold (2:05.26) ahead of silver medallist Franziska Hentke of Germany (2:05.39).

But, Hasegawa still has a solid chance of placing well in the finals. She is undefeated in the 200 short course meter fly in her ISL career. She will also be competing in her home country and time zone.

Hasegawa made the semifinals in Rio, but placed 9th  with a time of 2:07.33 and missed the final.

Very thin event but, with that, looking tricky to predict.

Zhang & Flickinger certainly look sound medal bets but have a strong suspicion that at least one of the “old school” (Hentke, Belmonte – if she swims it) may have something to say. Hasegawa might be a decent home-town bet.

Zhang has clearly the best credentials ahead of Flickinger and Kapas although it’s fair to say that there’s conceivably any one of about a dozen butterflies that could medal.

If I were betting, I might have a punt on Hosszu or Regan Smith (assuming they’re at reasonably long odds). They’ve both looked out or sorts this year, but they’re pound-for-pound the best two swimmers in the field.

Cheering for you hali!

To me the old guns (Belmonte, Hentke, Thomas) are the dark horses in this. If they can get close to their best from 2017/2018 they can definitely win a medal (or even the whole thing).

Only if she swallows her pride and drops all but maybe the 400 IM.

Yufei is dangerous here. She dropped out of the individual 100 free final at their Olympic Trials in favor of this event (think about that for a second – a 52 100 freestyler prefers to swim the 200 fly?!), and she is, by far, the fastest 100 flyer of the contenders. I don’t think she’s just going to win, I think she’s going to do something scary and get closer than we’ve ever seen anyone else to Zige’s world record.

Either Yufei has horrible endurance, or she’s holding her cards close to her chest because her 200s in free and fly are not anywhere near up to par for what she goes in her 100s. I have a feeling… Read more »

Seriously, “horrible endurance”? Don’t think you can accuse an Olympic 200 flyer of that.

Comparatively speaking. She goes 52 and 1:57 in freestyle, and 55 and 2:05 in fly. Chinese swimmers are traditionally strong (and in some cases, otherworldly) closers, and she was a 2:06 flyer back when she was two seconds slower in the 100. Her times don’t correlate from the 100 to the 200. Yet. And that’s the hand I think she’s keeping to herself and will reveal in three weeks.

you could expect a somewhat better 200 after that 100 speed thats true but some people are just much better at one or the other, look at Kapas for example who with her 2:06mid 200 can hardly break the minute in the 100

Kapas is an 8:16 800 freestyler. She has a massive endurance base, so it doesn’t surprise me that she can do that. Flickinger is not much better in the 100 fly.

What does surprise me is that someone so much better at 100s would drop an event she could be favored in to instead swim an event twice as long that is universally understood to be grueling when her 200s are her weak point. And THAT’S where I think the game is being played.

Every time I read that time I wonder if that’s the current world record which will last the longest. Probably until the end of the century. 😆
Biedermann’s 200 free, Zhang Lin’s 800 free and Katie Ledecky’s 800 free and 1500 free will last several decades too.

I agree about Mary T. If she had the 09 super suit she would’ve definitely been under 2:00.

Those women’s distance records will never last that long. They aren’t particularly special times. It only looks that way because very few elite athletes are willing to swim those monotone events. But once somebody special does show up the old standards fall easily. Same thing in track and field where the women’s 10,000 meter record was considered untouchable on those forums. Now it has been shattered 3 times since 2016

Mary T’s time from 1981 would be a medal threat today! Can’t think of any other event where this is true. Honestly speaks more to how out of this world Mary T was than it does to field today.

It’s not just the super suit… Mary T had no GOGGLES! And essentially zero dolphin kick. I don’t think it’s that crazy to think that in modern times she could have gotten close to the two minute barrier.