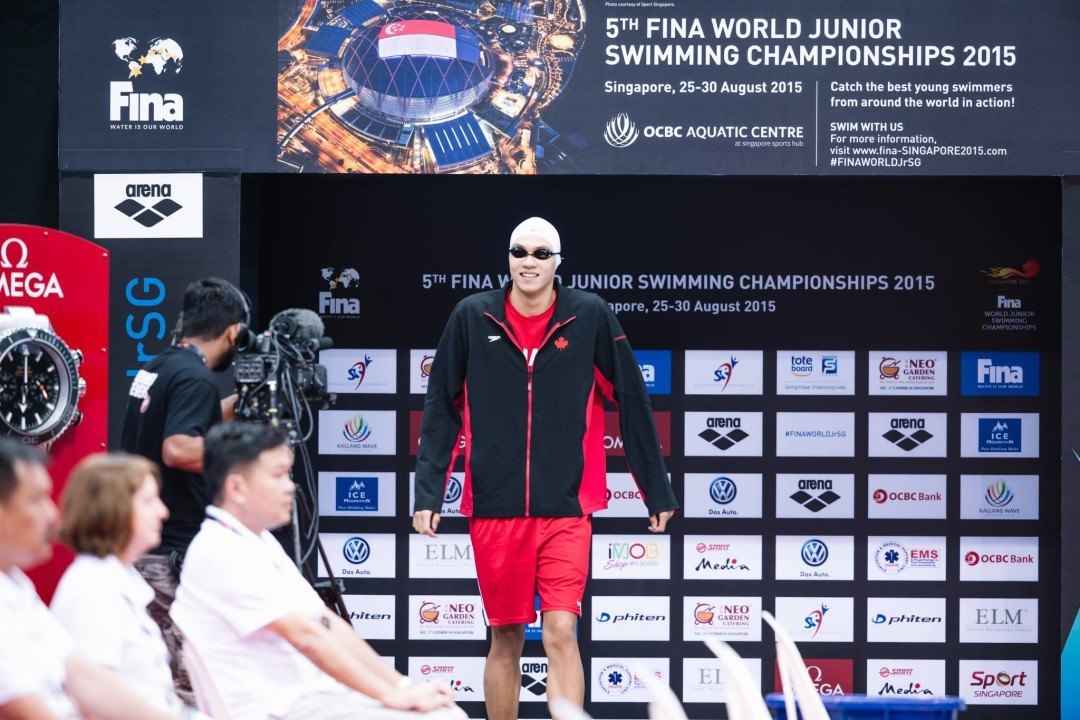 Canadian Olympians Markus Thormeyer and Hilary Caldwell put on a show in the 200 back to open the session. Archive photo via Adrian Seetho/Singapore Swimming Association

Canadian Olympians Markus Thormeyer and Hilary Caldwell put on a show in the 200 back to open the session. Caldwell, a Rio Olympic medalist, dominated the field to win it in 2:10.98. In the men’s version of that event, Thormeyer threw down a 2:00.65 to win by over a second. That was just 2 tenths shy of his personal best, which stands at a 2:00.41 from Canadian Olympic Trials last year. Thormeyer hauled in 2 golds tonight, as he returned to win the 200 free in 1:50.18.

The men’s 400 IM saw a tight battle between Canadian Tristan Cote and the USA’s Kieran Smith, as they raced stroke-for-stroke into the wall. Smith had the edge through the halfway mark, using his backstroke speed to create a lead of more than a second. Cote made a big move on the breaststroke leg, moving just ahead of Smith. In a nailbiter of a finish, Cote hit the wall in 4:20.34 for the gold, just .03 ahead of Smith (4:20.37). Though he was just shy of gold, that was still a huge swim for Smith, as he dropped over 3 seconds off his previous lifetime best of 4:23.25.

The women’s 100 breast also featured one of the most exciting races of the session between Canadian breaststroke stars Rachel Nicol, Kelsey Wog, and Kierra Smith. Through the front half, Wog took the early lead with a 32.20 to turn over half a second ahead of Nicol and Smith. On the 2nd 50, however, Nicol and Smith pushed their back-half speed, with Nicol running down Wog to take the win in 1:08.53. Wog narrowly held off Smith’s charge, taking the silver in 1:08.56 ahead of Smith’s 1:08.70.