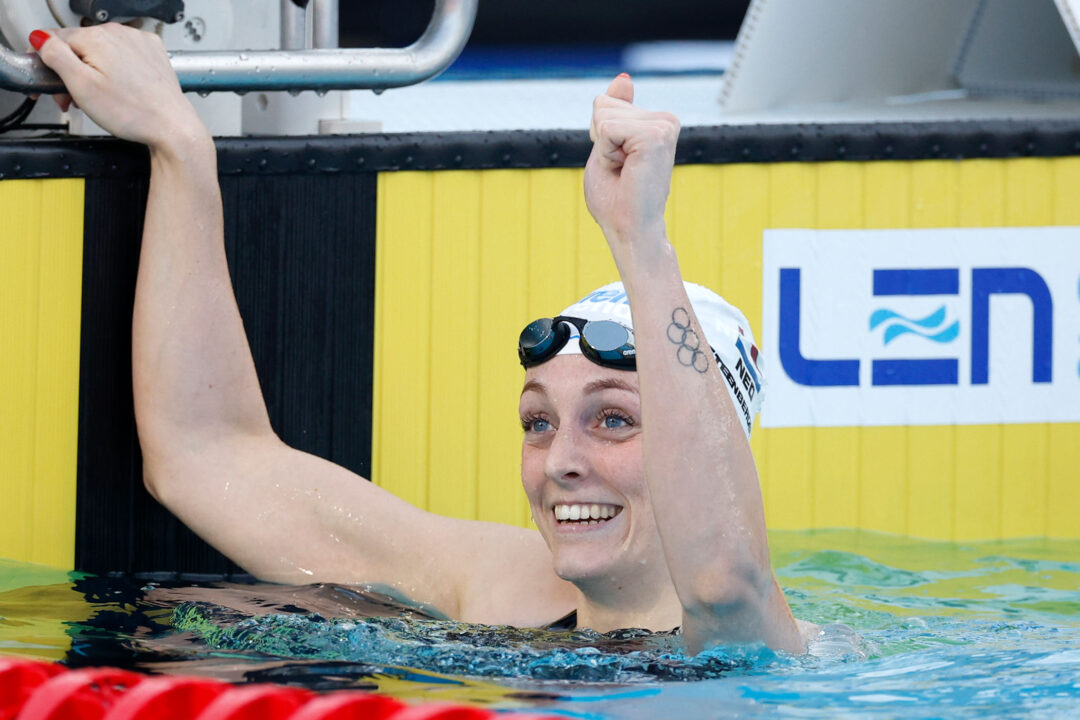 Despite being a lesser-known name coming into the championships, Dutchwoman Marrit Steenbergen had a standout performance in Rome. Current photo via LEN / Simone Castrovillari

With the pool swimming portion of the 2022 European Aquatics Championships coming to a close on Wednesday, it’s time to hand out some hardware to the top performers from what was an exciting seven days of action at the Foro Italico in Rome.

Below, find SwimSwam’s official awards for the women’s competition:

Despite being a lesser-known name coming into the championships, Dutchwoman Marrit Steenbergen had a standout performance in Rome, filling the void left by the retirements of legends Ranomi Kromowidjojo and Femke Heemskerk.

Steenbergen accumulated seven medals over the seven-day competition, including winning a pair of individual titles in the women’s 100 (53.24) and 200 freestyle (1:56.36). The 22-year-old added a third individual medal with a silver in the 200 IM, nearly running down winner Anastasia Gorbenko.

In the relays, Steenbergen was a stalwart for the Netherlands. On the opening night of racing, she anchored the Dutch team to gold in the women’s 4×200 free relay, putting up the fastest split in the field of 1:56.26 to lead the nation to their first-ever title in the event.

Steenbergen then split 52.33 on the mixed 4×100 medley relay to the lead the Netherlands to victory by nearly two seconds, and she added two more medals with bronzes in the women’s 4×100 free and 4×100 medley. In the medley, Steenbergen saved some of her best work for last, as she came home in 52.23 to help the Netherlands run down Italy to get on the podium and set a new National Record of 3:57.01.

The female performance of the meet came in a semi-final, as Ruta Meilutyte reset her personal best time in the women’s 50 breaststroke for the first time in more than nine years.

Meilutyte, who broke out by winning a stunning gold medal at the 2012 Olympic Games in the 100 breast, followed up by winning the 2013 world title in the event and also claimed silver in the 50 breast, having set a new world record in the semis in a time of 29.48.

That swim stood up as her best time until this past Tuesday, when the now-25-year-old clocked 29.44 in the semis of the women’s 50 breast for a new Lithuanian Record and the fourth-fastest swim in history. It put her just 14 one-hundredths back of the world record, set by Italian Benedetta Pilato at 29.30 last year.

Although she wasn’t quite as quick in the final, Meilutyte did win gold in 29.59—the same time she went in the 2013 final to place second—to mark her second European title in the event, first winning it in 2014.

NATION OF THE MEET: NETHERLANDS

There was quite a bit of parity on the women’s side of the competition, with 11 different nations winning at least one gold medal in 20 events. Only three—Italy, Sweden and the Netherlands—won more than one.

Despite not leading the ranks in terms of gold or total medals, the Netherlands earns our Nation of the Meet award thanks to a well-rounded effort.

The Dutch women had Marrit Steenbergen win two individual golds, and they had that historic victory in the 4×200 free relay.

Also making their way onto the podium individually was Valerie van Roon, Maaike de Waard (x2), Kira Toussaint and Steenbergen with an additional silver in the 200 IM.

Italy had more gold and total medals overall, but failed to reach the podium in any of the women’s relays. Sweden also had more gold medals than the Netherlands, and did win a relay, but only had a total of five medals.

Lana Pudar had a historic performance for her home nation of Bosnia and Herzegovina at the championships, as the 16-year-old won the country’s first-ever gold medal with her triumph in the women’s 200 butterfly.

Pudar broke her own National Record to win the event, clocking a time of 2:06.81 to surpass her previous mark of 2:07.58 set at the World Championships.

Prior to that, Pudar won bronze in the 100 fly in a Bosnian and Herzegovinian Record of 57.27, which at the time was the country’s first medal ever at Euros.

Earlier this summer, Pudar won the 50 and 200 fly at the European Junior Championships, marking an impressively busy and successful summer.

See above. Steenbergen really came through with some big swims at Euros, most notably with her anchor legs that helped the nation win and get on the podium in some relays that maybe they weren’t expected to given the recent retirements of Kromowidjojo and Heemskerk.

Perhaps most impressively, the 22-year-old showed that she was able to manage a large program at a major competition, racing 14 times in seven days and looking strong right up until the end.

would’ve been funny to add the 50 fly to the swim of the meet to have all of the 50s in that list. I know it’s nothing special for Sjostrom but I still think it’s a little crazy how swimming faster than anything else in history is taken for granted

Wait Pilato is still a junior? That blows my mind.

Excluding a junior swimmer because they almost won a different award? That’s kinda weak. Make a choice, give the other honorable mention.

Sjostrom for swimmer of meet. Rationale similar to Popovici over Milak – quality of swims.

Popovici’s swims were higher quality than Sjostrom’s though. He broke a SS WR, and both his golds would have won gold in Tokyo in arguably two of the most competitive events.

One of Sjostrom’s wins was non-Olympic and the other wouldn’t have won gold in Tokyo. I don’t think the same reasoning applies.

Which award would you have considered her for, and why?

You make a strong case.