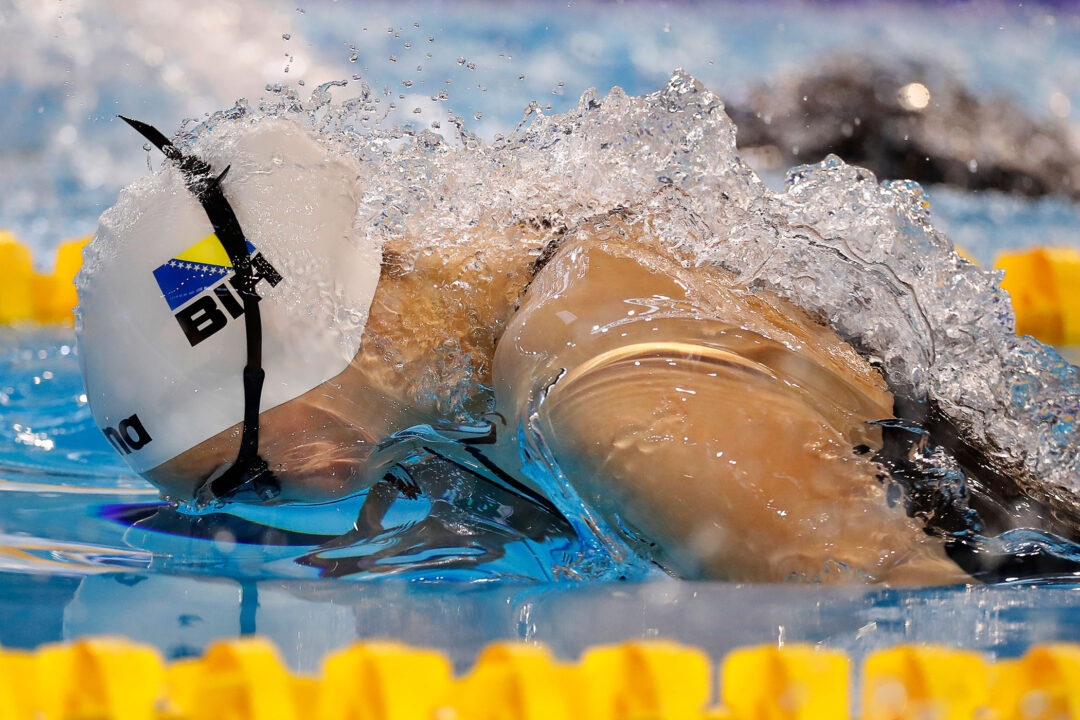 After bursting onto the international scene early last year, Pudar has become a trailblazer for Bosnia and Herzegovinian swimming. Stock photo via LEN/Simone Castrovillari

16-year-old Lana Pudar out of Bosnia and Herzegovina just keeps rolling. After bursting onto the international scene early last year, Pudar has become a trailblazer for Bosnia and Herzegovinian swimming. Last summer, at the age of 15, she became BIH’s first Olympic finalist ever. She then went on to the SC World Championships at the end of 2021, winning the countries’ first major international medal in history. In 2022, she won Gold in both the women’s 100 fly and 200 fly at the Mediterranean Games, and now has won Gold at the European Championships.

Here is a split comparison between Pudar’s swim this evening and her previous national record from the World Championships:

Pudar swam the race quite differently tonight, taking it out much more aggressively. The strategy paid off for her, as she was still a tick faster on the 3rd 50 than she was in her previous national record performance. She did fade at the end of the race compared to her World Champs swim but was only 0.82 seconds slower on the last 50 than she was in June.

Pudar wasn’t the only record breaker in the women’s 200 fly final tonight. Denmark’s Helena Bach claimed Silver, speeding to a new lifetime best of 2:07.30. She was out slower than Pudar, but came back much faster, splitting 32.64 on the 3rd 50 and 33.35 on the final 50. Her swim marks a new Danish Record in the event as well, downing the 13-year-old record that was held Micha Ostergaard from the 2009 World Championships. Notably, that means that Bach broke a supersuited record tonight.

Here is a split comparison between Bach’s swim tonight and the previous record from 2009:

She is phenomenal, but she wasn’t in the finals at the last Olympics. She maybe the first ever BiH swimmer with an A cut for the Olympics dough.

And her 100 time was a massive A-cut, she only lowered it here.

Well, you might consider her circumstances, as well – she does not even have a professional swimming pool in her hometown to train, so just imagine what she would be like if she had the same resources as you g swimmers in the US do.